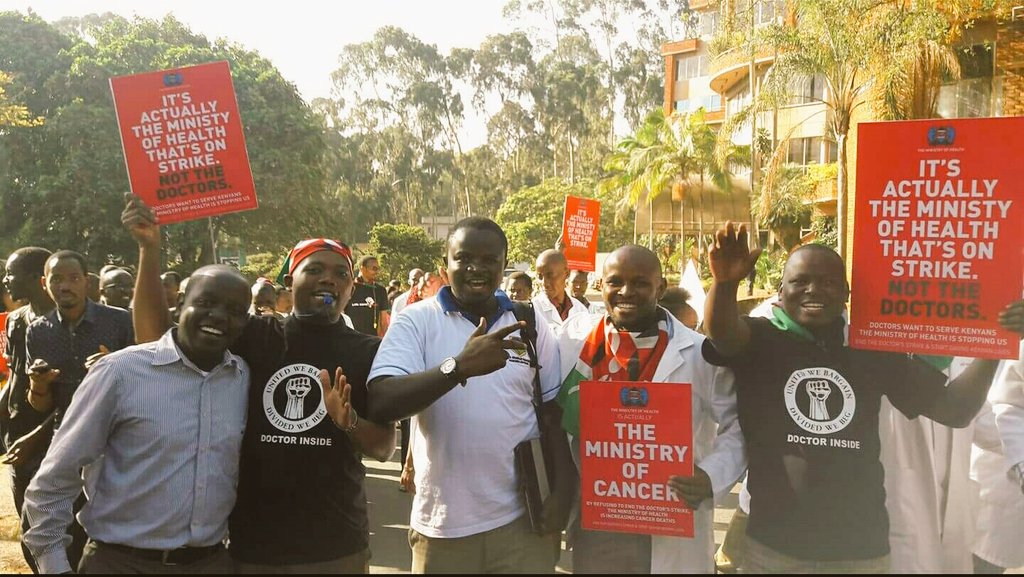 A Kenyan doctors union used social media to create public empathy and give supporters greater control over campaign messaging that would typically be filtered through government-friendly media.

The Kenya Medical Practitioners, Pharmacists and Doctors Union (KMPDU) had little public support when it began its 5,000-member strike on December 5, 2016. The government opposing union demands had been framing public messaging and had extensive influence over traditional media.

Many Kenyans saw KMPDU’s bargaining for higher salaries as greedy. Union members have jobs that pay better than most in Kenya. The union’s social media campaign soon brought millions of Kenyans to its side. Two months after the strike began, it basically morphed into an anti-corruption movement.

Three years ago, KMPDU had signed an agreement with the government to raise salaries. Despite the long wait, this collective bargaining agreement had never been implemented by the state.

This drove weary and overworked medical professionals across every county of Kenya to withhold their services.

The state swiftly demonised the union by framing them as the enemies of public health.

“Most of our local channels are owned by some politicians,” explained Elijah Kanyi, a journalist with Africa Uncensored. “When doctors take their issues on social media, it trends, and this forces the mainstream media to report [doctors’] issues even if they don’t feel like they have to do it.”

KMPDU was able to turn government propaganda on its head through Twitter and other online spaces. We can learn a lot from their efforts.

Lesson 1: If social media works against you, align with shared rhetoric and values.

Kenya has a history of resistance. The Mau Mau fought the British colonialists. Nobel Laureate Wangari Maathai popularised environmental rights and secured the release of political prisoners. The women by her side helped topple Daniel arap Moi’s longstanding regime. While there is always more to be done in the way of raising awareness, Kenyans are alert to the prevalence of corruption and its consequences on their lives.

KMPDU was able to capitalise on the anti-corruption rhetoric held dear by Kenyans. They turned the state’s anti-doctor crusade against itself through the ironic hashtag #GreedyDoctors.

In 2015, President Uhuru Kenyatta’s government hired the notorious 36 bloggers to control online messaging over issues pertinent to Kenya. This cost about $200,000.

He signed and shared this document:

'Our Greed' as Doctors of Kenya is to make your Healthcare system BETTER. We are very proud of that kind of 'Greed' pic.twitter.com/9PvjZbHC66

“In most labor disputes, the government uses…the media to dominate the narrative,” wrote George Gathigi. “Through social media, medical workers have found a way around this…. By popularising and using the symbolism Kenyans have adopted against corruption, health workers have located their industrial action within a broader national debate.”

Lesson 2: Create stories, photos and video of people (not policy) that are easier to share on social media.

Labour Court judge Hellen Wasilwa, who described KMPDU members as “stinking sewage,” threatened the medical professionals on January 12 with a month in prison should they fail to end their strike within two weeks.

Hundreds of doctors promptly took to the streets in their hospital attire, singing and dancing in protest of Wasilwa’s unjust decision, but they realised they would need to build more public support for those facing a sentence.

By January 22, KMPDU began releasing photographs of its leaders and members, including their stories and motivations for the strike, under the hashtag #healthontrial.

These posts garnered much sympathy and public support. Allies emerged with determination to block the imprisonment of their public caretakers. Sympathisers planned protests, should the strikers be jailed.

“To make sure we reach the whole population, our information has been packaged in a myriad of forms running the whole gamut from articles and blog posts to pictorials,” said medical officer intern Robert Tabu. “We have garnered support and goodwill from Kenyans. Propaganda is now being debunked. We are not relenting on this front.”

Increased exposure of the looming jail sentence of blameless health workers put the labour court in a tricky position. On multiple occasions since the original verdict, KMPDU members who have vowed to suffer criminalisation for their belief in a functional health system went to court and enjoyed a postponement of their sentence, allowing talks between the union and the government to continue.

Lesson 3: Expand the focus–a campaign is easier to talk about if it’s about everyone, not just those striking.

KMPDU did not merely aim to triple the salaries of its members, which had been as low as $400 a month. It also advocated for better service delivery in the health sector by telling stories of the decrepit conditions in Kenya’s medical facilities.

One hashtag that centralised such stories is #DoctorsAreHumanToo. KMPDU and its supporters circulated images in December of health workers trying to navigate deplorable conditions in an effort to deliver services to Kenyans.

Dr. Kisiangani pondering his next move after he was told the hemogram machine had broken down #doctorsarehumantoo pic.twitter.com/gt926nu2nx

One particular photo of a doctor carrying a baby while performing an operation received over 300 retweets and was included in a BBC story about the doctors strike. 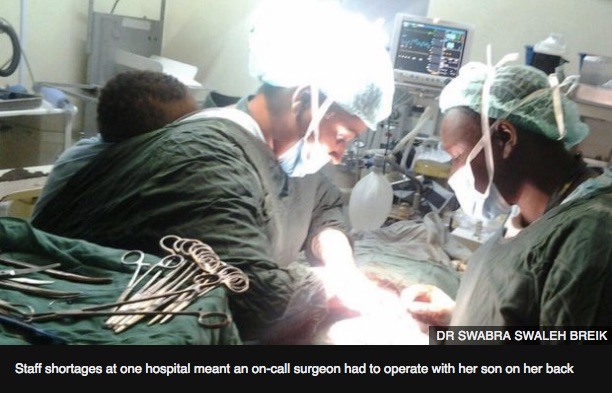 A photo of a surgeon operating with her baby on her back was widely shared on social media.

#MyBadDoctorExperience eventually made its mark as well. Patients and health workers shared stories ranging from frequent power outages during surgeries to deaths resulting from the absence of ambulances simply because a health executive was using it for personal business. Across East Africa, almost everyone knows someone who has died due to lack of oxygen, blood or other commonly needed medical supplies.

The 100-day strike came to a close on March 14 when the government offered increased allowances while negotiations on other grievances would continue. Oluga said, “The strike may be over, but the industrial dispute is not yet.”

Photos of awful hospital conditions helped doctors show people the problem in the face of government media. But the union campaign is just the beginning of efforts to organise in support of desperately needed medical facility funding.

Moses Masika, a fellow at the University of Nairobi School of Medicine, isn’t optimistic about the prospects for a larger campaign but strategies and values of the campaign for doctors to a campaign for Kenyan health care but there is an opportunity to learn from the doctors’ struggle. “We Kenyans who get the horror that is awaiting us if we give up,” wrote blogger Wandiya Njoya, “are in this struggle for the long haul.”