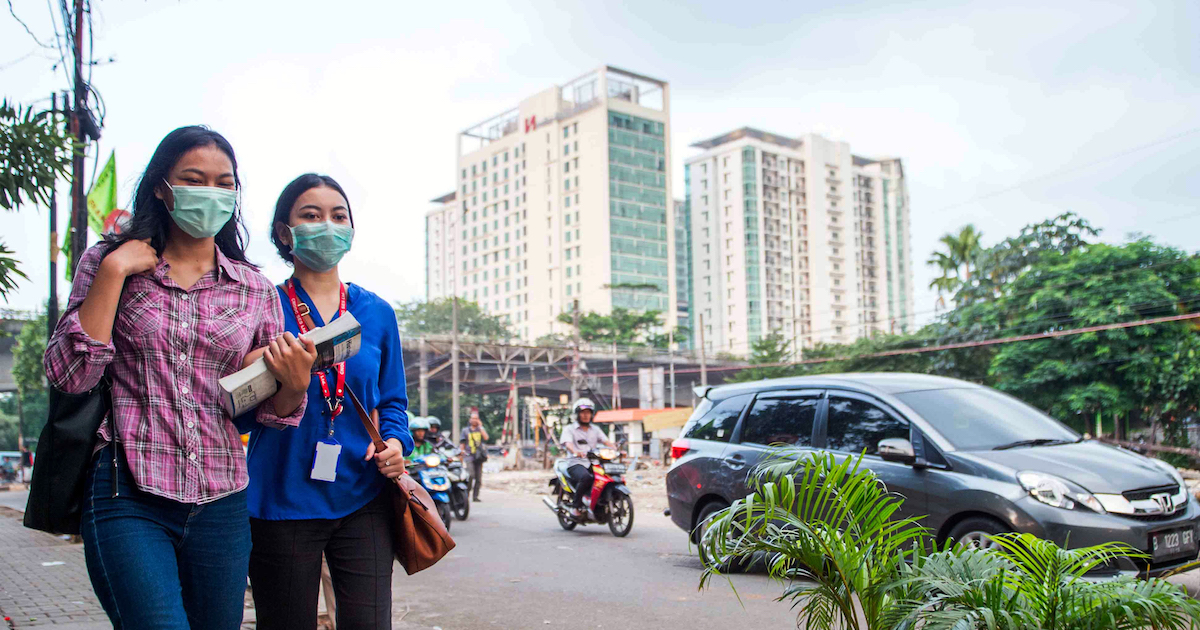 “Indonesia is a country of social media freaks,” said Leonard Simanjuntak, country director for Greenpeace Indonesia. “Our constituents and potential constituents are online and need to talk the same language as them if we’re to have any chance of influencing them to take action.”

In fact, Indonesians are avid social media users and early adopters of new smartphone apps and technologies. Some call Jakarta the top “tweeting” city in the world. The country has a 100 million internet users, most of whom use smartphones, and an e-commerce market expected to grow to $130 billion by 2020. 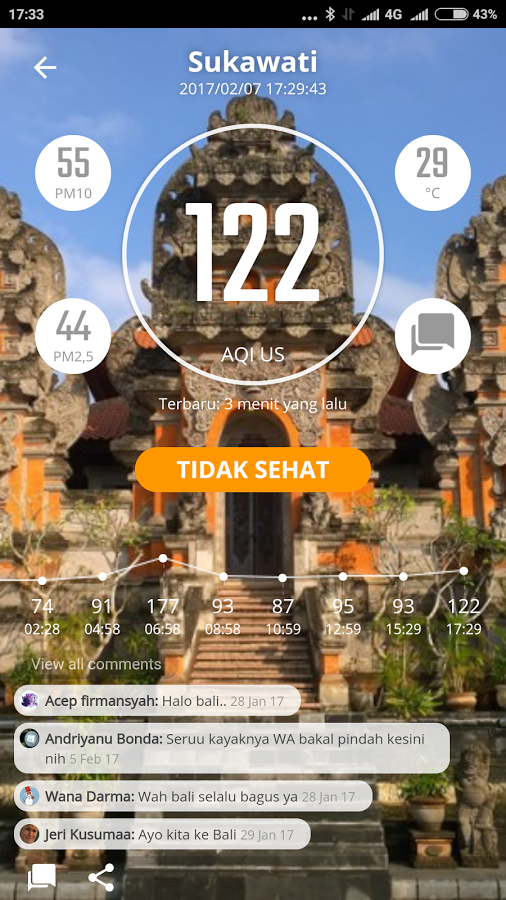 Greenpeace Indonesia is campaigning to stop construction of new coal-fired power plants in Indonesia. The government has plans to build 20GW of coal-fired capacity. If built, these plants would be a disaster for the local environment and set back global climate change efforts.

“We see air pollution as one effective entry point to our campaign against coal expansion,” said Simanjuntak. “By raising awareness about air pollution, we are trying to talk to the heart and minds of urban people.”

But plans call for these plants to go into mostly rural areas. That’s the case with the Central Java-based, and heavily contested, Batang power plant. Jakarta’s pollution will become far, far worse, if coal power plants are built. 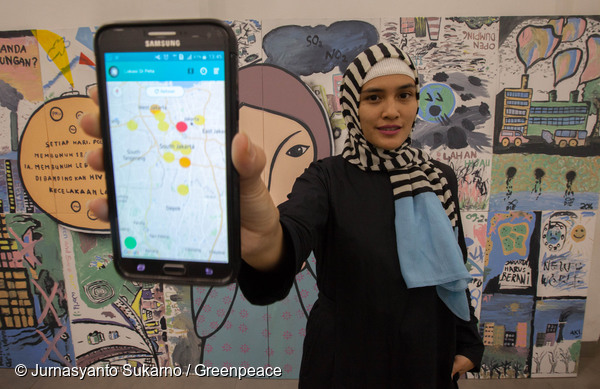 Indonesians (including Greenpeace supporters) are mostly urban dwellers. As a result, most Indonesians don’t see new power plants (and their potential pollution) as a direct threat. Connecting people to the potential impact of faraway coal plants is a challenge made worse by lack of official air quality data. The government does not publish this information.

Greenpeace decided to bring air quality info directly to the people. They placed air quality sensors across Jakarta and a few other major cities and built Udara Kita to show Indonesians, for the first time, exactly how bad pollution was in Jakarta and how it could impact their health.

“We realized that existing air quality campaign tools didn’t support movement building because they didn’t give people meaningful ways to talk one one one to friends and family about air pollution,” said Hindun Mulaika, team leader for Greenpeace Indonesia’s Climate and Energy campaign. 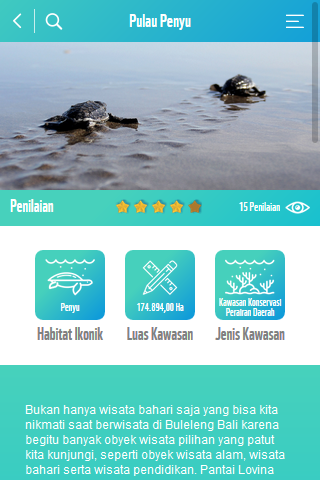 World Wildlife Fund’s Marine Buddies app may seem to share goals with Udara Kita but it has a different model and target audience. Marine Buddies gives users ways to collect–and share– important data about marine areas in the form of personal reviews.

“Marine Buddies is a platform for people to report on conditions in MPAs [Marine Protected Areas] and give reviews the place and their experience,” said Dwi Aryo Tjiptohandono of WWF Indonesia. Users need to be within the boundaries of an MPA to be able to submit a report or review.

Marine Buddies takes design inspiration from TripAdvisor and includes detailed travel information about MPAs. The app aims to engage tourists and tour operators in and around MPAs. These people are often some of the most passionate environmentalists and WWF supporters. WWF’s Aryo believes they will be eager to share what they find with WWF.

Takeaways: What Greenpeace and WWF Indonesia are learning from app development

Utilize existing assets. WWF Indonesia did not build Marine Buddies from scratch but used an existing tool, developed to aid the Government to better monitor MPAs, as the basis of the app.

Constantly innovate. Both WWF and Greenpeace are working on a second version of the apps. Both plan to make the user experience simpler while also integrating more direct action and advocacy tools.

Make it simple for users. Greenpeace found that requiring registration reduced the number of active users on the app. They plan to make it easier for people to use the app without registration.

Consumer friendly design. Both apps take design inspiration from popular consumer apps, reducing the barrier of entry for new users. For example, WWF modeled the Marine Buddies review tool on TripAdvisor, a platform that travelers (a target audience) often use.

Next Steps: Moving from Mobilising the Base to Reaching New People

Both apps aim to mobilise more people (and apply more pressure) in the long run by building awareness through active engagement with everyday needs. Urban Indonesians are affected daily by poor air quality but have never had access to data that shows just how bad (or good) air quality is and how those levels impact everyday health. 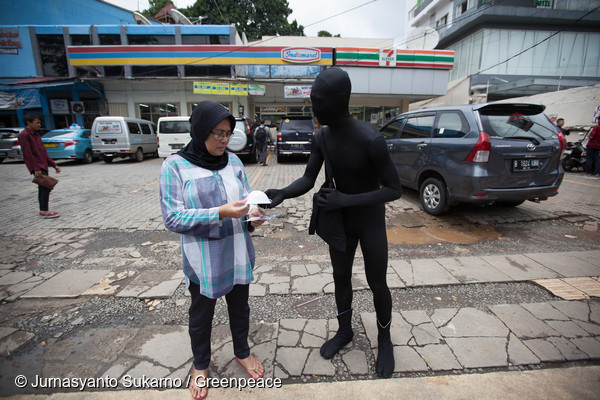 A man wearing “Zentai” costume offers a mask to a passer by in Jakarta during the public launch of Greenpace Indonesia’s Udara Kita app. Photo © Jurnasyanto Sukarno / Greenpeace.

Greenpeace is building towards bigger actions says Jeri Kusuma Asmoro, a digital campaigner with Greenpeace Indonesia: “[In future versions] people can use tools to engage leaders when the air pollution is bad.” Functionality may include petitions, ways to contact Government officials and even a way for people to report polluters.

WWF is aiming for 100,000 downloads by the end of the year. With around 5,000 installs to date they have a big challenge ahead. WWF also plans to launch an English language version targeted at foreign tourists visiting Indonesia’s MPAs.

Marine Buddies campaigners are organizing local events, tours of MPAs, and doing outreach to communities such as divers, students and tour operators, that WWF sees as the key target audiences for the app.

“WWF has an existing community in Jakarta, Surabaya, Medan, Makassar and Bali,” said Aryo. “Their role is to expand our campaign, and they are the ones who will reach out to other audiences.”

While both apps have received positive response from users and the media, staff are gathering user feedback and working with developers to improve usability. Udara Kita users, for example, have had issues with the registration/login process. Future versions will eliminate registration until a user takes a campaign action, such as signing a petition.

Hundreds of millions of people across Indonesia, Asia and Africa are coming online for the first time with smartphones–not desktops, laptops or tablets. Apps like Udara Kita and Marine Buddies that are user-friendly and continually evolving are a new gateway to awareness and activism. Both Greenpeace and WWF aim to engage current and future generations of Indonesian netizens to protect the water and air of the diverse, archipelago nation.