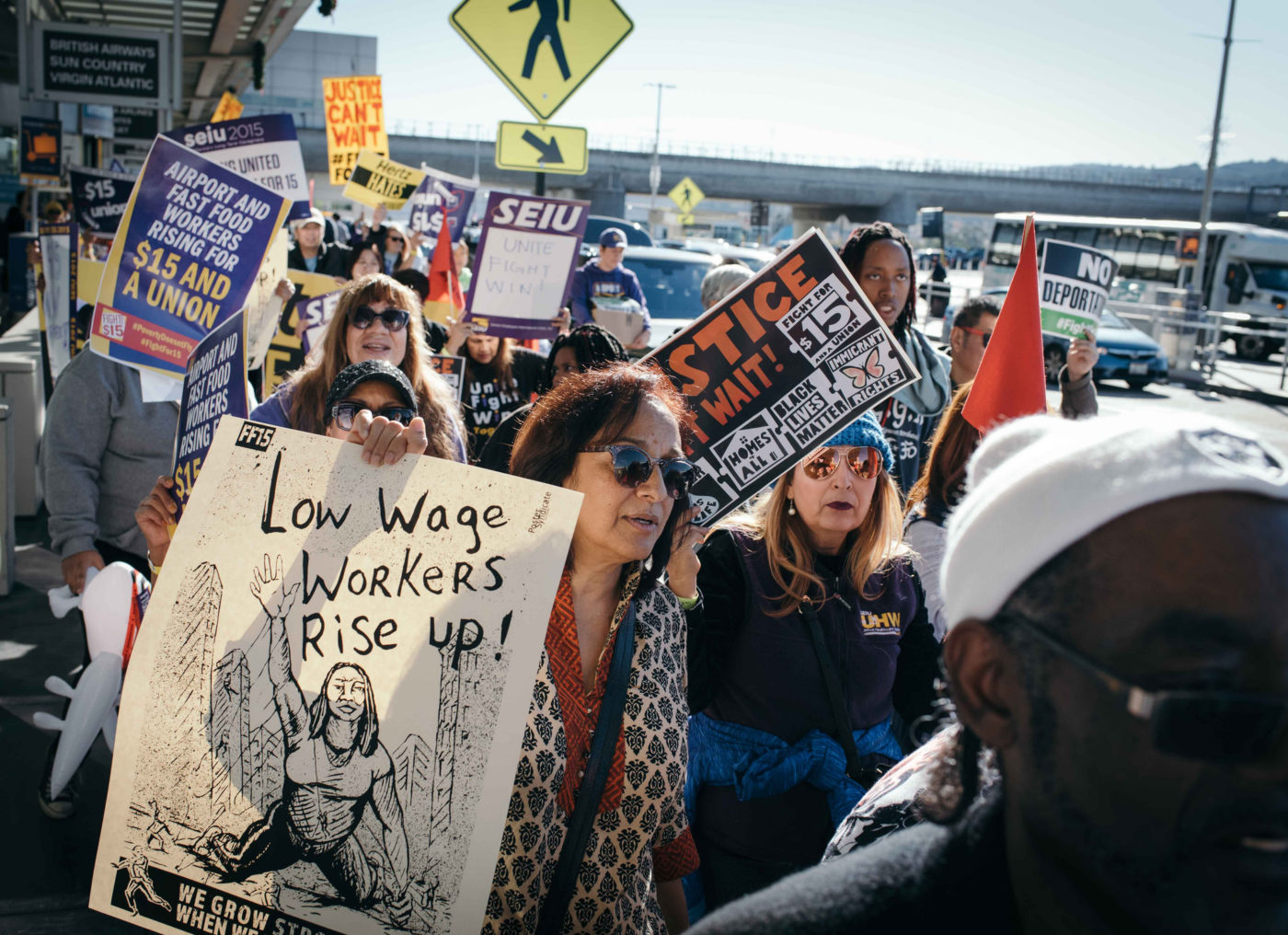 This piece originally appeared in The Chronicle of Philanthropy and is republished here with permission.

New technologies are enabling activists to connect, communicate, raise money, and engage in collective action at previously unimaginable speeds and scales. The rise in social-movement moments around the world demonstrates the growing ability of ordinary people to challenge power — as seen in actions like the Women’s Marches and March for Our Lives in the United States and campaigns for action on climate change and democracy around the world.

“People-powered” movements such as these don’t rely on direction from experts or nonprofit institutions and what could be months, or even years, of planning, organising, and fundraising.

While many nonprofits are learning from this new wave of activism, many others are not. Traditional approaches to advocacy strategies, decision-making, and building power at the grassroots level fall short of what’s needed today. It’s more important than ever for nonprofit leaders to adopt new approaches, or risk becoming irrelevant and unable to deliver results.

Through my organisation’s work with advocacy groups around the world, we have identified three areas in which social-change organisations (and the grant makers who support them) can better meet today’s challenges at the scale required to achieve lasting impact.

The era of annual dues and “card-carrying” members is rapidly coming to a close.

Trust in institutions (including nonprofits) continues to decline, and the digital age presents an ever-expanding set of options for contributing directly to social change. In short, loyalty is no longer a sure thing.

As a more empowered and better-connected generation of activists joins the fight for social justice, we advise organisations to think of their supporters as something more than donor prospects: instead, they are powerful agents of change.

Large email lists and associated online fundraising programs are valuable but insufficient when it comes to building the kind of power organisations need to shift popular mind-sets, influence legislative processes, or transform systems. Single-click online activism, such as petitions, are still useful to expand participation in campaigns. But such approaches alone won’t build the deeper, lasting relationships ultimately needed to mobilise people to act in ways that win campaigns.

And as essential freedoms of assembly and expression erode in six out of 10 countries, including the United States, nonprofits will be the ones most in need of a deeply committed supporter base to help defend their very right to exist.

To be effective, organisations must ask new questions: How can we create the best possible experience for our supporters and volunteers? How can we provide the kinds of personalised experiences and instant feedback loops our supporters are receiving on other digital platforms? How can we ensure that they not only contribute meaningfully to meeting the mission but also recruit others into the work? How can we inspire them?

Reflecting these concerns, more advocacy organisations are turning to new approaches that enable them to organise volunteers and activists at a broader scale. Instead of asking people to donate to staff-directed efforts, they’re encouraging individuals to become the change agents themselves; to take the lead in campaign actions that are creative, high impact, and often local.

We’re witnessing a new generation of decentralised organisations like Indivisible, Cosecha, and IfNotNow. Many of them have adopted digitally savvy methods of recruitment and organising based on models developed by Momentum, a training institute and incubator for social movements. Unlike more traditional top-down organising models that rely on hierarchical models to approve new chapters or local activities, these groups operate more like a network — relying on emerging leaders to start groups and lead advocacy drives based on shared principles.

The youth-led Sunrise Movement is among the most visible examples of a group using this approach to build real political power.

The effectiveness of this approach is demonstrated in the group’s recent victory introducing a “Green New Deal” into the political lexicon and forcing discussion of climate change in Congress soon after the midterm elections.

The Fight for 15 campaign, which took the idea of a $15 minimum wage from dream to near reality in short order, shows how organisations can use these new organising approaches to mobilise muscle at a strength needed to shift public narratives and influence decision makers.

It could take many legacy institutions years to fully adopt these approaches. But taking the first steps can bring immediate gains to almost any organisation. Most advocacy groups would benefit from investing in the staff and technology needed to fully integrate databases of information about their supporters across functions and departments (e.g., fundraising, volunteering, social media). Doing so would provide a more complete picture of each individual’s relationship with the organisation. Leaders can also encourage their teams to test more participatory or “open” approaches to campaigns, where staff members invite supporters to contribute their time and expertise to plan or carry out an advocacy drive.

Over the past decade, advocacy groups have made necessary investments in strategic digital communications (as distinct from marketing) — though such efforts have been insufficient. It’s now the norm for organisations to use social media to mobilise supporters or to influence companies, policy makers, and journalists. Few organisations, however, have shown they can shift the public narrative to truly change the culture — as we saw, for example, in the hugely successful marriage-equality campaign in the United States.

Film, television, and other broadcast-era media have been essential for decades for ushering in social change. (In the marriage-equality movement, think “Will and Grace” and “Glee.”)

Today, however, popular culture is shaped and defined extensively in digital spaces as well — whether in “memes” that spread rapidly on social media or in more intimate messages to friends, relatives, and colleagues. Advocacy organisations, therefore, must have the staff, skills, and technology needed to use digital tools for maximum advantage.

Campaign teams, for example, might test multiple storylines with different social-media audiences to determine what works best to shift mindsets and the narratives prevalent in mainstream media.

Advocates in last year’s historic abortion-rights victory in Ireland cite as a key to their success the powerful storytelling that occurred both in person and through Facebook, Twitter, and other social networks. After the vote, in a poll of people who changed their minds to vote “Yes,” 39 percent said they were influenced by a conversation with family or friends.

Social activism has benefited from a new generation of “big data” analytical tools, communications tools like text messages, canvassing tactics, and social-listening platforms (in which online tools like Crimson Hexagon, ActionSprout, and Attentive.ly are used to learn what people are saying about brands and issues). But using these approaches strategically requires ongoing investment and support, in part to keep up with rapid changes in tools and technologies.

Nonprofits have operated traditionally with many specialists and departments, and by rewarding predictable, safe behavior and incremental change. Such approaches — still in place at legacy and digital-era organisations alike — are not up to the challenges of a world in which threats to people and the planet are multiplying more quickly than ever.

To tackle these complex threats, we need organisational models more likely to drive transformational change. The most effective organisations today are nimble in planning and recruit the kind of staff who can respond more holistically and flexibly to seize strategic opportunities to act, thereby improving the chances of success.

Specifically, social-change organisations need the following to succeed over the next decade:

Traditional organisations will be ill-equipped to seize key opportunities for advancing their mission unless they adopt flexible budgets, move beyond linear strategies, and work to get everyone involved in strategy. If a team fully understands not just what the strategy is but why it was designed a specific way, it will be far more effective at seizing moments of opportunity when circumstances shift.

Greenpeace Philippines advocates experimented with this kind of adaptive approach in the wake of Typhoon Hagupit. They tossed out their existing playbook for reacting to climate-induced weather disasters to make big gains in their campaign for ecological agriculture.

Typically, an advocacy group like Greenpeace would respond, for example, by calling for accountability by polluting industries that contributed to the storm’s devastating impact. For this storm, the group did that by pushing the nature of the humanitarian crisis to global media and policy makers. At the same time, however, advocates saw an opportunity to provide devastated local farmers with flood-resistant, ecological seeds that would help solve the immediate agricultural crisis (crops were wiped out) while encouraging alternative, sustainable farming practices not yet common in the region.

Cultures that reward experimentation and collaboration

Effective organisations today know they must reduce their bureaucracy and decentralise decision making to empower staff members so they can be more responsive to emerging opportunities and new approaches. This includes, for example, leaders encouraging and rewarding staff members who think of innovative approaches and take informed risks to advance the mission — especially if those efforts don’t result in immediate wins.

Shifting institutional culture can be hard work. But we’ve seen, for example, the kind of success that can come from using software-development principles like prototyping — testing ideas to understand what is or isn’t working before launching a big project or expanding it. Such methods can enable organisations to be more efficient with limited resources.

Staff members at Greenpeace Mexico applied this approach by getting valuable feedback from people in the street (potential audience members) to refine and improve their campaign targeting Bimbo, a much-loved multinational food brand. By testing and revising their campaign with the kinds of people they hoped to reach, the team successfully convinced Bimbo to abandon high-impact agricultural practices involving harmful chemicals and pesticides and to test the idea of relying solely on sustainably grown corn.

More collaboration founded on a shared view of the world

Organisations today are increasingly aware that the challenges they face are bigger than they can tackle on their own; that just doing “their part” in isolation is a recipe for failure. More groups must come together to focus on the root causes of the problems they’re seeking to solve.

A strong recent example is the Greater Than Fear campaign in Minnesota — a cross-issue, alliance-based campaign to shift the local narrative from fear and divisiveness (i.e. xenophobic, racist, anti-immigrant) to one of hope and inclusion (i.e., gender and racial equity; economic opportunity for all). In contrast to a traditional coalition campaign with a uniform approach, Greater Than Fear enabled participating groups and political campaigns to still work on “their” issues — but to do so in a way that consistently advanced the broader narrative ambitions of the wider alliance.

The media and campaigning landscape seem to be changing more quickly than any of us can keep up with. But with some care and attention, we can shape our organisations to make them better equipped to seize opportunities, build powerful relationships, and inspire action so we can build the just, peaceful, and sustainable world described in so many of our mission statements.