We were joined by Professor Steve Levitsky of Harvard University and Dr. Maria Stephan of the U.S. Institute of Peace. Vitali Shkliarov, a political and electoral strategist based in Russia, also joined and Vanessa Williamson, a political scientist based at the Brookings Institution, hosted the conversation.

Our guests examined latest research and studies on authoritarianism and democratisation, observations on the rise and fall of authoritarian regimes, and the impact and role of civil society and non-violent resistance. Activists and campaigners joined the live conversation and offered questions.

Watch a recording of MobLab Live, plus catch up with the highlights and notes below:

Technology is a crucial tool of civil resistance–and state control.

There are mixed results of digital technology where it makes information and democratic opposition accessible. On the other hand, autocratic governments has also used the same technology and digital spaces for state control, limit opposition voices and advance their narrative.

Democratisation has been happening for decades and people-powered resistance has overthrown many regimes across the world. Keeping that as the principle, technology can complement people’s action and movements but should never substitute it.

Non-violence is a proven strategy against authoritarianism.

Maria Stephan noted that her research clearly finds in favor of non-violent resistance. Historically, non-violence has been twice as effective as armed conflict at producing regime change.

We have to lower the entry points so that politics is accessible for everybody. Now is the time to create and scale political incubators and rethink political engagement strategies.

Negotiations should not ad-hoc.

Negotiations are to diverse and strong movements. Think of using negotiation as an overarching strategy while building stronger civil resistance coalitions.

Authoritarian regimes, like any government, hold power via coalitions. Work to separate authoritarians from other pillars of society: economic elites, security forces, and government workers. Collective defiance eventually brings the downfall of the regime.

Books, articles and more mentioned (or written by) our guests: 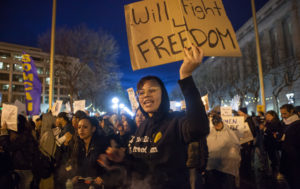