Mobilising with people to whom it matters the most 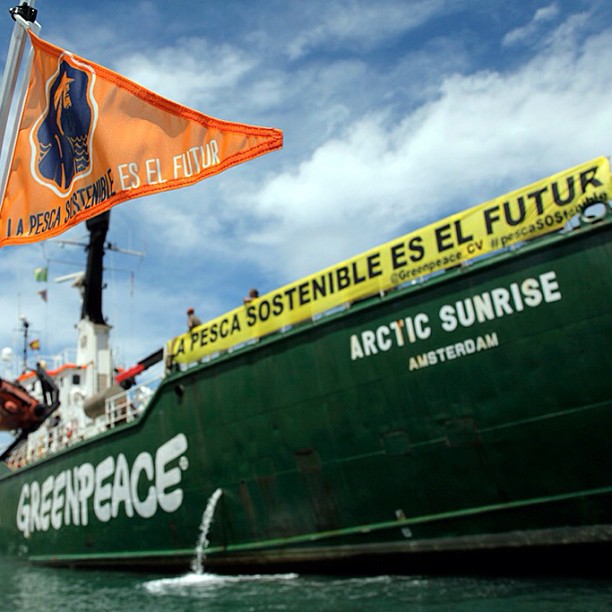 The three-year-old son of an artisanal fisherman presented oceans and fisheries campaigner for Greenpeace Spain, Celia Ojeda Martinez, with a drawing called: ‘Celia: captain of the ocean.’ The boy explained in Galician – a regional language in Northwest Spain – that he gave Celia the drawing because she was working with his dad and she wanted them to have fish.

Moments like this – with warm, welcoming and positive energy — don’t happen very often in the midst of battles to shift gears in policy directions. But these moments stood out during a four-year effort to reshape European fishing policies after decades of overexploitation and incentives that favored a minority of large-scale fishing tycoons, pushing small-scale fishers out of business.

“Often Greenpeace campaigns are about stopping things and fighting with adversaries, whereas this positive approach of working together, where we were welcomed wholeheartedly to ports throughout Europe, was very rewarding,” says Nina Thuellen, Greenpeace International oceans campaigner. 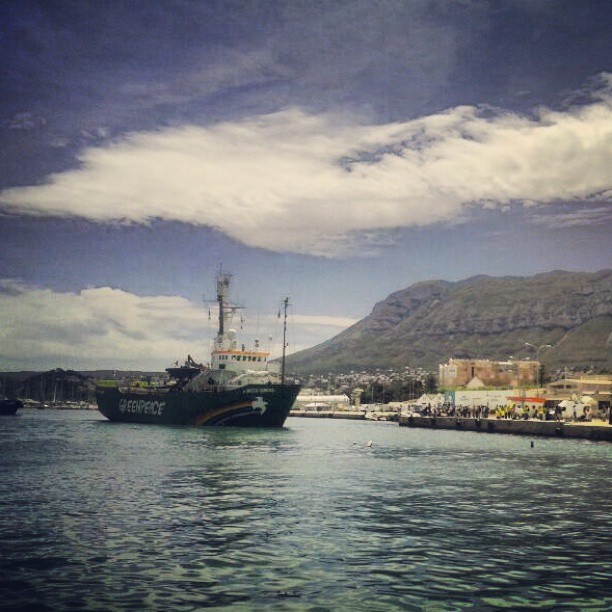 The Arctic Sunrise Ship pictured in the Balearic Sea in May 2013.

Greenpeace began strategizing how to best affect change in European fishing laws in 2009 – a critical point to begin influencing how the Common Fisheries Policy (CFP) could change upon expiry in 2013, after a decade of enactment. Six months later they split campaigners into two groups: one to support low-impact, artisanal fishers, and the other to tackle large vessels and large-scale fishing tax subsidies.

“One is to support the best and one is to eliminate the worst, in a way,” says Celia, who managed the former section of the campaign in Spain and coordinated with another 11 Greenpeace offices across Europe. She began building relationships with fishing communities from port to port about two and a half years ago, which eventually continued in other countries including Greece, Italy, Bulgaria and Denmark.

Greenpeace began supporting fishers to exchange digital and snail mail communication with other fishing communities throughout the continent. They wrote each other letters in their own languages and struggled to make sense of Google-translated versions of mail they received. Greenpeace also trained fishers to speak out publicly, with media and politicians, and helped organize meetings with EU decision-makers.

“We were not representing the fishers and not telling them what to say, but accepting that fishers had positions that were different from Greenpeace,” says Araceli, who collaborated on the campaign as part of the Spanish Mobilisation Unit.

Araceli is inspired by the efforts and successes she witnessed throughout the fishing campaign. She continues to apply these lessons to her current work on mobilisation efforts with the Volunteering Lab.

“I think we could have never organized the activities with the fishers from all over Europe if there was not this relationship with other organizations and with fishers. This is not something you can do from one day to another,” Araceli says. “This talks a lot about how Greenpeace needs to work in the future – with the people that are really involved in the problems.”

The success around collaboration also speaks to a novel way in which Greenpeace functioned internally for this campaign.

“We don’t have a European office so this is a first time office where we operated intensively and made it a European campaign,” says Nina, who is based in Austria.

Greenpeace campaigners implemented a targeted approach that strategically leveraged what was most relevant to achieving goals for reform. This method – as opposed to casting a wide net for mobilisation – helped to facilitate their relationships with fishers and other non-profit organizations, resulting in a diversity of tactics to create momentum in pushing fisheries issues to the public agenda in Europe.

“I think it was a matter of trust and respect that was very important, but also the fishermen and us understood that we could profit a lot from each other and whereas alone we would probably not be able to be as successful,” Nina says.

Relationship-building between fishermen reached a pivotal juncture in November 2012, when the first European Artisanal Fishermen’s Congress was held in Brussels. The gathering of 50-60 fishers – together representing about 10,000 fishers across Europe – enabled small-scale, coastal fishermen and shellfish harvesters to form a common declaration. In it, they request that EU decision-makers address the following four points:

1) Grant the right to fish to those who fish sustainably;

4) Restore the health of our seas in Europe and the rest of the world.

As decision day drew closer, Greenpeace launched a four-month ship tour across 10 countries from Romania to England. About 120,000 people joined the Arctic Sunrise flotilla tour between mid-March and early June. 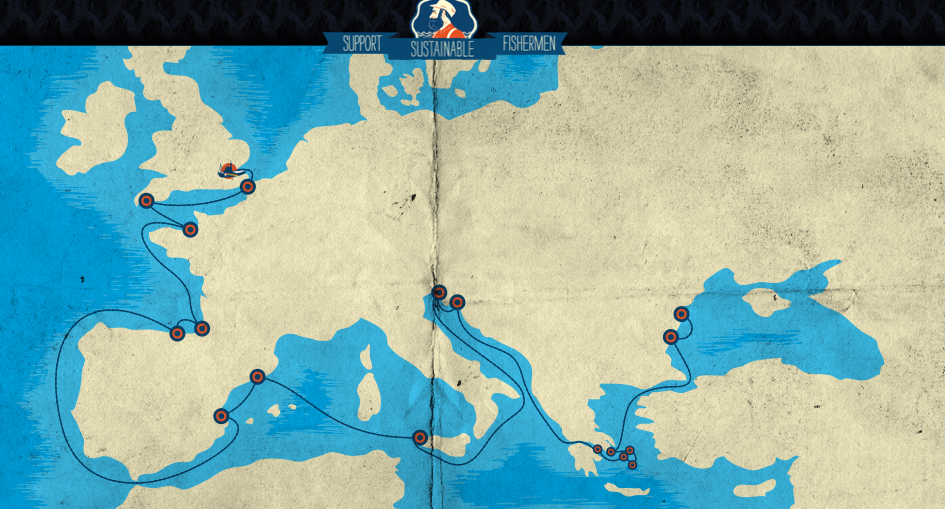 “For me, the best part was the relations between the artisanal fishermen – seeing a Romanian fisherman talking with an English fisherman,” says Celia. “It doesn’t matter where they belong or where they fish; they have the same aims – to protect the sea. To fish for future generations, not just their own business.”

Greenpeace International launched an interactive java-based website to go along with the ship tour that allowed users to track the ship route along nearly 20 port stops. Users could also tag tweets and uploaded photos with designated hashtags like #gpboat and #malo that corresponded with a specific port stop – in this case, Saint Malo, France on May 26. These quotes and images are displayed when you click on a port stop. The site also features a counter displaying the number of boats being set to sea throughout the campaign.

At 3:30 a.m. on May 30, the European Parliament and Council reached political agreement on the main points of basic regulation of fisheries reform. News reached the Arctic Sunrise as it sailed through France that CFP reform was approved in a largely positive way for oceans, fish stocks and sustainable fishermen. It is the first time that the EU included social and environmental standards in its fishing quotas.

Campaigners and fishers celebrated their lofty achievements in CFP reform, but remain cautiously steadfast in their work as some ideas to build newer, larger vessels with more subsidies for industry fishers continue to ripple in the EU. 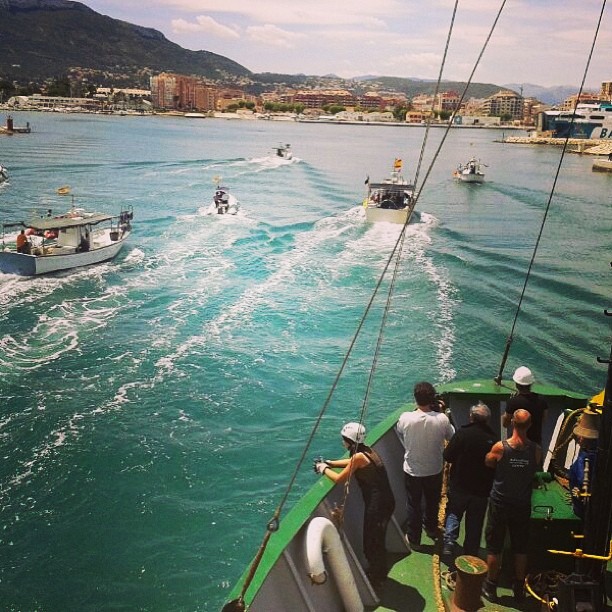 Passengers aboard the Arctic Sunrise look out from the ship to Dénia, Spain.

Small-scale fishers are currently planning a second European Artisanal Fishermen’s Congress in Galicia, Spain for the fall. Greenpeace continues to support these efforts, though they are largely directed by the artisanal fishers.

“What we have really won is that the fishermen realized they have the power to go stand up and say: we are the majority; we want to keep fishing and in a sustainable way,” says Celia. ”And we know that we can do it together. We do it slowly, but we can do it. It’s a very strong movement.”

The Spain-based campaigner sees possibilities for collaboration beyond solely fishers and those who live by the ocean, to include fish consumers in dense, urban centers. “We need a big push – for people to demand that they want to eat it in a sustainable way. Something like that will be amazing because we want to have fish and fishermen and to have better oceans for everyone,” says Celia. “Everyone needs the sea and the oceans.” 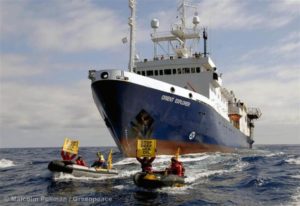