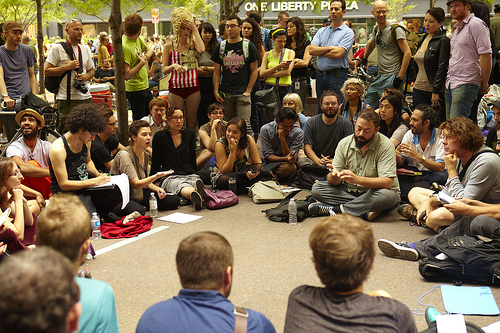 Keeping new activists and supporters involved in personally meaningful ways is a continual struggle for new and growing movements. Digital communications tools may expand reach but rarely scale engagement. Ever tried to use email, Skype, group text or  Facebook to make a decision? They’re accessible but not necessarily democratic.

The Occupy movement’s General Assembly format allowed all to have a voice but the in-person meetings could be inefficient and exclude those unable to be present or unwilling to speak up.

Online or in person, the inability of our engagement approaches and tools to scale meaningful participation may limit growth, stifle new ideas and turn people away.

Movements that want to grow and support new leaders need alternatives to the current batch of tools available to assist in communication and decision-making processes. Social media helps networks expand but offers few avenues for scaling deep engagement. An app called Loomio is one tool that seeks to fill this gap.

“As access to information becomes more and more distributed, access to decision-making needs to be distributed as well”
– Ben Knight, Loomio

Loomio is an open source program from New Zealand that helps groups and movements open their communication and make clear decisions. Co-founder Ben Knight describes Loomio as “providing an online space for people to talk things through, and come to clear decisions together.”

Loomio was born out of Knight’s experience with the Occupy Wall Street movement. Knight felt like there was something missing from the decision making process employed by Occupiers. While exhilarated by the general assembly at Occupy Wellington in New Zealand’s capital, Knight felt that the five-hour meetings were long, often ended in stalemate, and were also difficult for many to attend.

In Knight’s opinion the need to be physically present left hundreds of would-be Occupiers out of the process entirely. “As we become distributed, our decision making needs to be distributed as well,” says Knight.

In its basic inception, Loomio allows a group to discuss any subject put forward by a group member. The discussion takes place until someone makes a proposal for action regarding the subject.

The voting options on the proposal include agree, disagree, abstain, and block.

To agree is to go along with the proposal, to disagree is to say there’s a better option but the member is OK with the group’s decision, to abstain is to do just that, and to block means the member has extreme objections.

Any vote can be paired with a tweet-length response so the member can give context to their decision; and the real-time votes are illustrated by a pie chart.

Check out the video below for an explanation of how it works.

Loomio’s simplicity is what sets it apart from similar programs that have come before. “It’s a pie chart with four buttons,” says Douglas Rushkoff, professor and author of Present Shock. Within Loomio’s simplicity is a mechanism that allows anyone to become engaged in a movement’s decision making process in a meaningful way, and that is what makes Loomio so powerful.

It’s this easy user interface, centralized documentation, and transparency that are bringing a political party in Spain, a student movement in Hungary, a democratic movement in Greece, amongst other movements and organizations from around the world, to Loomio.

“We realized that as we grew, we wouldn’t be able to sustain the email load,” says Chelsea Robinson of Generation Zero, a youth-led environmental group in New Zealand. “We thought Loomio would be useful for looking back and remembering why we decided something, as well as using it as a platform for consulting larger numbers than we were game to talk with on email or Skype.”

Not only has Loomio empowered Generation Zero’s youth members to deliberate better, it has also changed the way they hold in-person meetings. Robinson explains, “[Loomio has] increased the literacy of volunteers around how to make decisions, and they run ‘roomios,’ in-person Loomio style processes. The core national teams now talk about abstaining versus no versus block, whereas beforehand we just talked and talked and talked.”

Loomio is also allowing groups to grow their volunteer and activist base, make decisions with real time information, and give voice to those that may otherwise be unable to make a particular meeting.

How Loomio is used at Generation Zero.

Both Robinson and Knight are quick to point out that Loomio is not in competition with the face-to-face basics that are critical to movement building. Loomio is meant to be one of many tools to enhance discussion and foster clear decision-making. “For a social movement to be sustainable, there needs to be in-person capacity-building,” says Knight.

And this seems to be true for the 10,000 current groups on Loomio; most, according to Knight, existed in-person before using the program. These groups and the approximately 43,000 current members were looking for an online tool to aid their ongoing deliberations. Where polling is just preference without a discussion and listservs are, at best, a discussion without a decision, Loomio is filling the void left by these common tools.

With about 180 new users a day, Loomio’s future looks bright. By the end of November, 2014, Loomio 1.0 will be released, which will have better accessibility and increased mobile compatibility than the current beta version. Future applications of Loomio may even include an SMS version that will allow those without smart phone technology to harness Loomio for their activism and movement building. This will be especially useful in places like sub-Saharan Africa where SMS technology is ubiquitous. While Loomio is free and written in open source code, Loomio does ask that organizations with a budget pay a nominal fee per user, per month.

Currently, Knight is traveling through North America and Europe evangelizing Loomio. The draw for organizations and movements around the globe is that Loomio is a simple way to scale impact beyond petitions, listservs, and even in-person limitations.

In the bigger scheme of things, Knight says he wants to see this project help make collaborative governance the norm and democratic decision-making a core competency. Generation Zero’s deeper level of in-person engagement on account of using Loomio online seems to demonstrate that Knight may get his wish.

Top photo: General Assembly meetings at Occupy Wall Street were accessible but participation (and progress) was limited by meeting length and the need to be physically present. Experience with Occupy helped drive creation of Loomio. Photo by Caroline Schiff. Creative Commons BY-NC-SA. 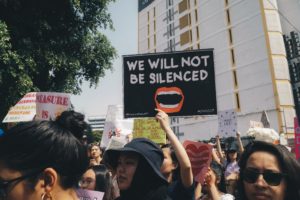