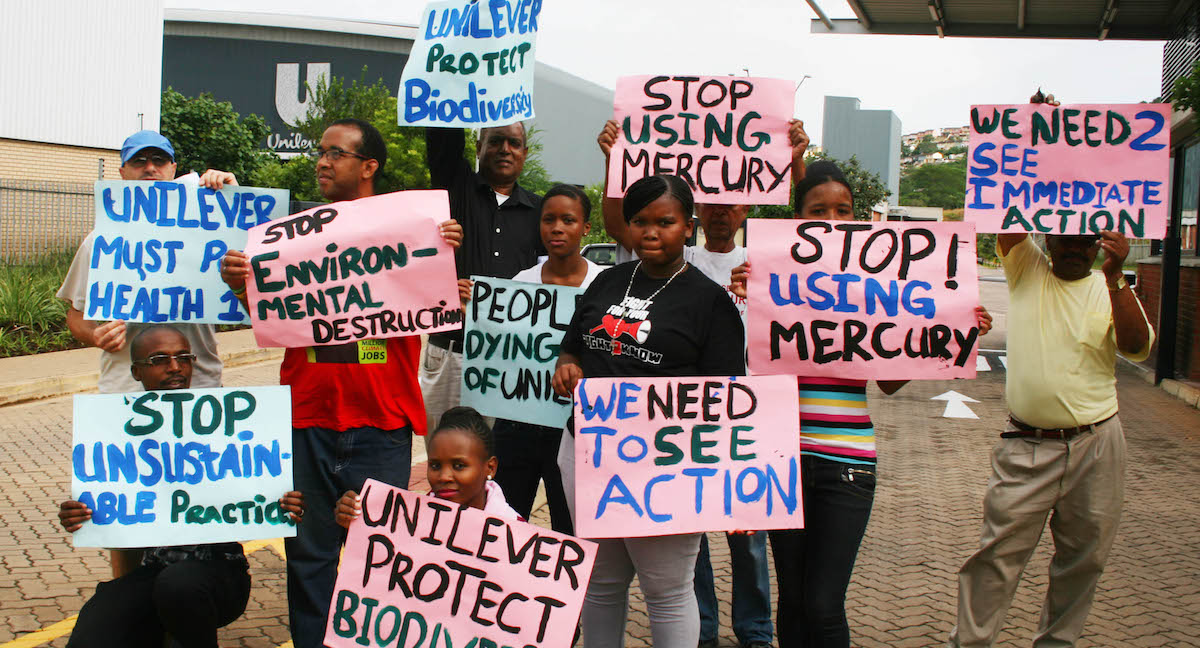 A mercury thermometer factory in Kodaikanal, a city in the Indian state of Tamil Nadu, left behind a toxic legacy of pollution and health problems. The factory, known to have lax environmental and health standards, closed in 2001. Local leaders, former factory workers, labor activists and others spent 15 years challenging the factory’s owner, Hindustan Unilever, to clean the site and fulfill its obligations to former workers.

Local organising—rallies, media events and media challenges—resulted in strong local support for cleanup but few results. Unilever, a multinational consumer products company, remained unmotivated to act.  In 2015, Kodaikanal activists began a partnership with Jhatkaa, an online campaign organisation. A collaborative and innovative digital campaign broadened awareness across India and, more notably, to the UK, where Unilever is based. The campaign built on the strengths of both sides to force action by Unilever. 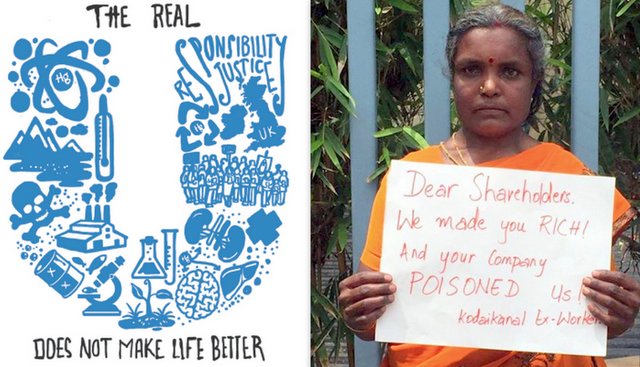 A collaboration between Jhatakaa and local activists who had long fought for Unilever to clean up the Kodaikanal site resulted in bringing the U.K. based multinational corporation to the negotiating table.

Nityanand Jayaraman, a Chennai-based writer and social activist, has been involved in the Kodaikanal campaign since 2001. After testing a range of messages, he and other activists turned to social media as a way to engage the public and bypass traditional media gatekeepers. Needing a partner that understood digital campaigning, Jayaraman and team soon met with India-based Jhatkaa.

Jhatkaa does not try to mimic Avaaz or Change by building large lists around hot-button issues. Instead, Jhatkaa seeks to be an India-specific campaigning organization working with new and existing grassroots campaigns across the country.

Volunteers facilitating an online petition to Unilever at a protest site in early 2015. Photo courtesy kodaimercury.org.

Respect for each partner’s strengths became key to a strong relationship. “Without the trust of partners, we wouldn’t have trust of ex-workers, and we wouldn’t have been able to do any of this,” said Bhavik Lathia, a campaigner with Jhatkaa who was heavily involved with the Kodaikanal efforts.

The grassroots activists had knowledge of the issue, the media environment, and how to respond to Unilever’s corporate messaging. Meanwhile, Jhatkaa knew digital campaigns, and took the lead on creating an online strategy.

“There was a lot of reliance on Jhatkaa’s experience in digital field, and they were quite easy to work,” said Jayaraman. “We understood messaging a press release, but understanding restrictions with digital media – communicating with a lot fewer words – Jhatkaa was able to guide us through that.”

In recent years, the gatekeeping role of traditional Indian media, challenged the ability of local activists to raise national awareness of Kodaikanal’s situation. Unilever and its Indian subsidiary, Hindustan Unilever, spend huge amounts of money on advertising. The media depends on this advertising to survive and many outlets were wary of criticising Unilever.

“If the matter is not in the media, it is invisible,” said Jayaraman. “So that’s the reason, in 2015, we decided to bypass conventional media and take [the campaign] to social media.”

This was also an opportunity. This advertising meant that Unilever Global, through its pro-sustainability and corporate responsibility statements, was vulnerable to a campaign targeting its image. Jhatkaa identified its highly visible CEO, Paul Polman, as the prime target. This may not have been possible if Hindustan Unilever, or a less image-conscious company, had been the chief target.

Focusing on Unilever’s global CEO, rather than its Indian subsidiary, was a strategic choice. Moreover, this would allow the social media campaign to engage audiences across the world, bringing beyond the boundaries of not just Tamil Nadu, but India as well. The environmental and labor mess in Kodaikanal, obviously, did not fit in well with the corporate steward image that Unilever was cultivating, but until the social media campaign went viral, Kodaikanal was easy for them to ignore.

“We were really adamant to keep the focus on Paul Polman,” said Lathia. A rap video featuring Chennai-born rapper Sofia Ashraf launched in July, 2015, bringing the campaign to new audiences. The video currently has nearly 4 million views on YouTube.

The video soon went viral, according to Jhatkaa, exceeding goals and garnering, at that stage, over 150,000 views. It even attracted foreign media, which, in turn attracted Indian media to the story, allowing the campaign to overcome the inherent pro-Unilever media bias. Twitter helped as well. Over 500,000 people were reached by the calls to tweet at @PaulPolman, perhaps prompting him to respond directly to the campaign.

In the end, Unilever came to the negotiating table to deal directly with former workers. A settlement was agreed to in March.

Avoid ego, and remember who the campaign is about. One reason that both Jhatkaa, and grassroots organizers were able to avoid conflict over ego-sharing is that they focused attention on the workers.

Social Media can’t win alone While the video helped spread the message further than was possible before, it was backed up by years of research, knowledge, and a activist research team, giving heft to the campaign.

New digital campaigning tactics made a difference but it took longstanding local knowledge and legitimacy to turn a message into on the ground results.

“The workers were struggling for 14 years before we helped,” said Lathia, “and then after all this went viral, and we were able to put global pressure…they came to the table to reach a settlement as quickly as possible.”

At the same time, Lathia believes that this is mostly due to the grassroots activists and their long, unceasing efforts. “They are the heartbeat of the campaign. It’s about them sharing credit with us, because we’re the guys who tagged along for the exciting bit of the ride.”

The ride, of course, is not over. Unilever did agree to pay worker’s compensation but has not yet agreed to the other key demand of activists: a full clean-up of the former factory to the highest standards possible. A new campaign push is targeting Unilever in the U.K., it’s home base.

Campaigns like Kodaikanal can be found across India and the developing world. Grassroots activists may organise for years but economic and government structures limit power. Media access is limited.  Digital communications networks are still growing (and sometimes highly restricted). Many may view Kodaikanal and hope to follow a similar formula—let’s make a video and make this a national or global cause. 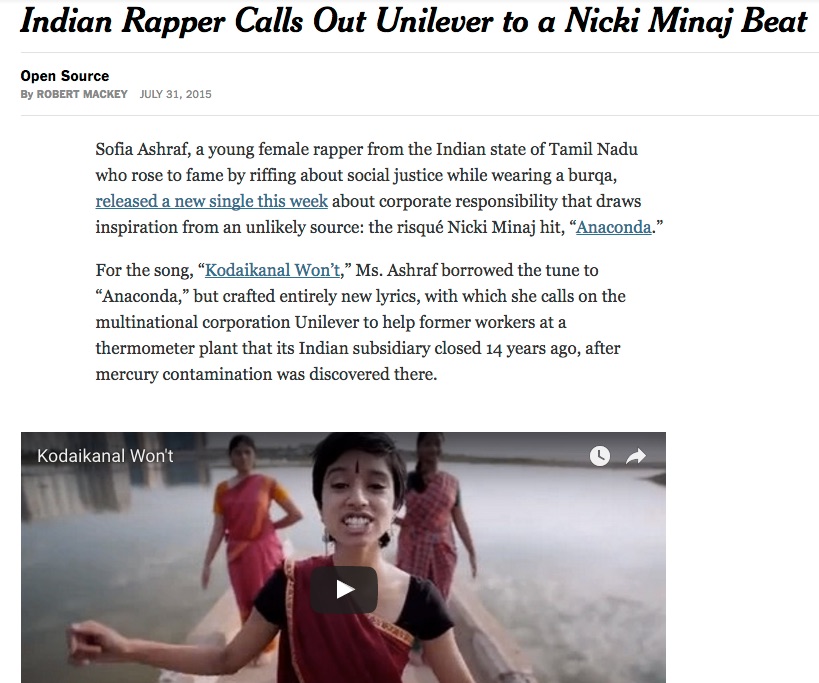 The New York Times and other global media covered the Kodaikanal campaign after release of the “Kodaikanal Won’t” video.

“For social media to be relevant, it has to be contextualized to your local struggle,” said Jayaraman. “Not necessarily a petition or a rap video – might be memes, might be an infographic – might be something that you do on Twitter.”

Jhatkaa and activists built both reach and power by deliberately using social media to build on (rather than replace) existing local knowledge and capacity. All 15 years of preparation and on-the-ground activism went into the social media strategy, so that, for example, when when Unilever responded campaigners could respond quickly and effectively, keeping the pressure firmly on Unilever. That was synergy.

“There was dedicated team of activist researchers in Chennai, spending days and nights putting out rebuttals,” said Bhavik. “This gave us the ammo we need to run the online campaign.”

It was never a question of one tool, or tactic over another. Only together could they have gotten one victory, and hopefully, succeed again. 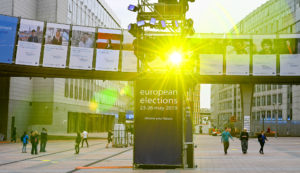 How collaboration made investment treaty a national issue in Canada 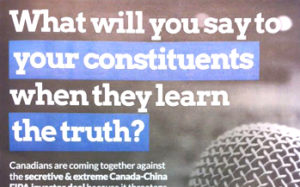