Martin Lloyd, Greenpeace International’s marketing and communications manager, says Greenpeace wanted to understand the emotional and behavioural principles at play on their international Facebook page, which has more than 1.3 million likes, and create behavioural design solutions to increase sharing and participation on the page.

They partnered with market research firm Brainjuicer, to identify the psychological and emotional influencers driving (or not driving) sharing levels.

The team built a replica Facebook page and invited 100 members of the United States public, selected because they were open to messages from NGOs, to view the page.

Each participant’s baseline mood was assessed to determine if they were happy, sad or indifferent pre and post visiting the Facebook page.

Will Headley, Brainjuicer’s research and technical director, says they found that Greenpeace’s Facebook page is good at making people feel an emotion, compared to many websites or social media pages, which are neutral.

“You need to have an emotional page if you want people to do anything, whether that’s online or offline,” he tells MobLab.

However, the type of emotion matters. Will says they found participants base mood lines swung dramatically after visiting Greenpeace’s Facebook page, with happiness decreasing, and other emotions like surprise, anger, contempt, disgust and sadness increasing.

Next, the team began testing 10 different images to learn what people responded to. 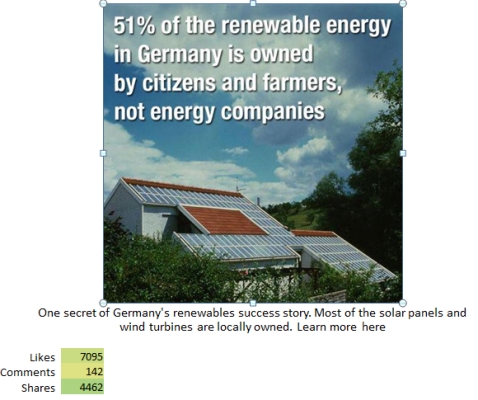 The research shows positive emotions were more helpful in driving action than negative emotions. An image of a rooftop filled with solar panels sharing that most of Germany’s renewable energy is owned by citizens and farmers received nearly three times as many shares than an image stating that Shell in the arctic is a nightmare. 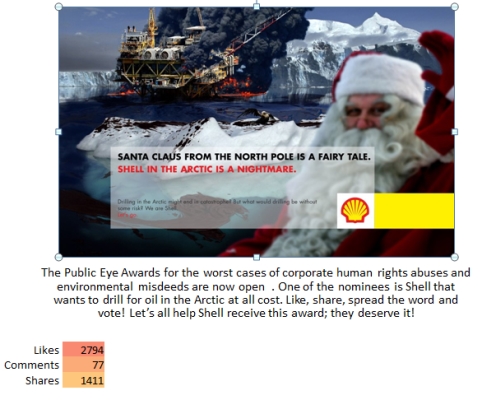 This negative image is harder to “like” even if you agree with it. Negative emotion can still help drive behaviour change (“feel nothing, do nothing”) but negativity can add barriers to sharing. When using negative emotion it’s important to lead into the solution rather than leaving feelings of despair (which may lead to avoidance rather than positive action).

“As a starting point, make people feel something and it’s more helpful to have them feel something positive, whether it’s a positive surprise or happiness that’s more useful than feeling sad or angry. I think that can be surprising for some nonprofit brands and charities,” says Will. 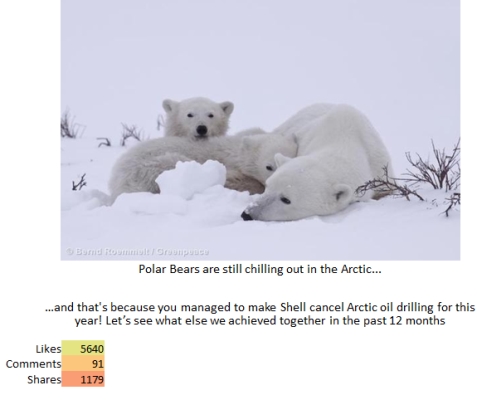 This image is very easy to like (cute polar bears) but relatively less shared and commented on as it doesn’t prompt further action.

It can be challenging for nonprofits to evoke positive messages when they’re trying to rally people against timely or devastating events and activities, according to Martin. However, he says this and other research Greenpeace is conducting shows people want hope and constructive ways they can take action.

“If you have something that’s positive and inspiring that really carries a lot further and people are looking for that kind of energy,” he says.

He says this presents an opportunity for nonprofits to reframe their messaging to be more constructive. For example, Martin says a post warning that “These nets kill dolphins, ban them now,” could be reframed to “Sustainable fishing is good for dolphins, click here to support our sustainable fishing campaign.”

Presenting posts and images with a positive frame is also a more consistent messaging approach, which was another recommendation coming from the research.

“One of the theories is it’s quite disconcerting go from ‘this is bad you have to do something,’ to ‘this is happy,’ to ‘here’s something you’re going to lose right now,’” says Martin.

“(If you) bring everything into this consistent approach hopefully this will lower the cognitive load and make it easy for people to support it all.”

It’s better to talk about something that’s immediate, happening now, or yesterday, or could happen tomorrow, rather than a future forecast. Will recommends framing things in the short-term perspective. He says many of the benefits  and costs of environmental change are framed in a long-term perspective, which is difficult for people to comprehend, making them less likely to act. You can create subconscious urgency by framing things in near-term perspectives.

The second stage of Brainjuicer and Greenpeace International’s work begins now, and involves testing their hypotheses to learn what works, and create a set of best practices.

• Emotions of fear, anger, disgust and contempt are negatively correlated with likes and shares

• Of the negative emotions, contempt is usually aimed at Greenpeace, anger and disgust usually come up in the context of whatever Greenpeace is drawing attention to

— Watch for a follow-up post about the research results soon