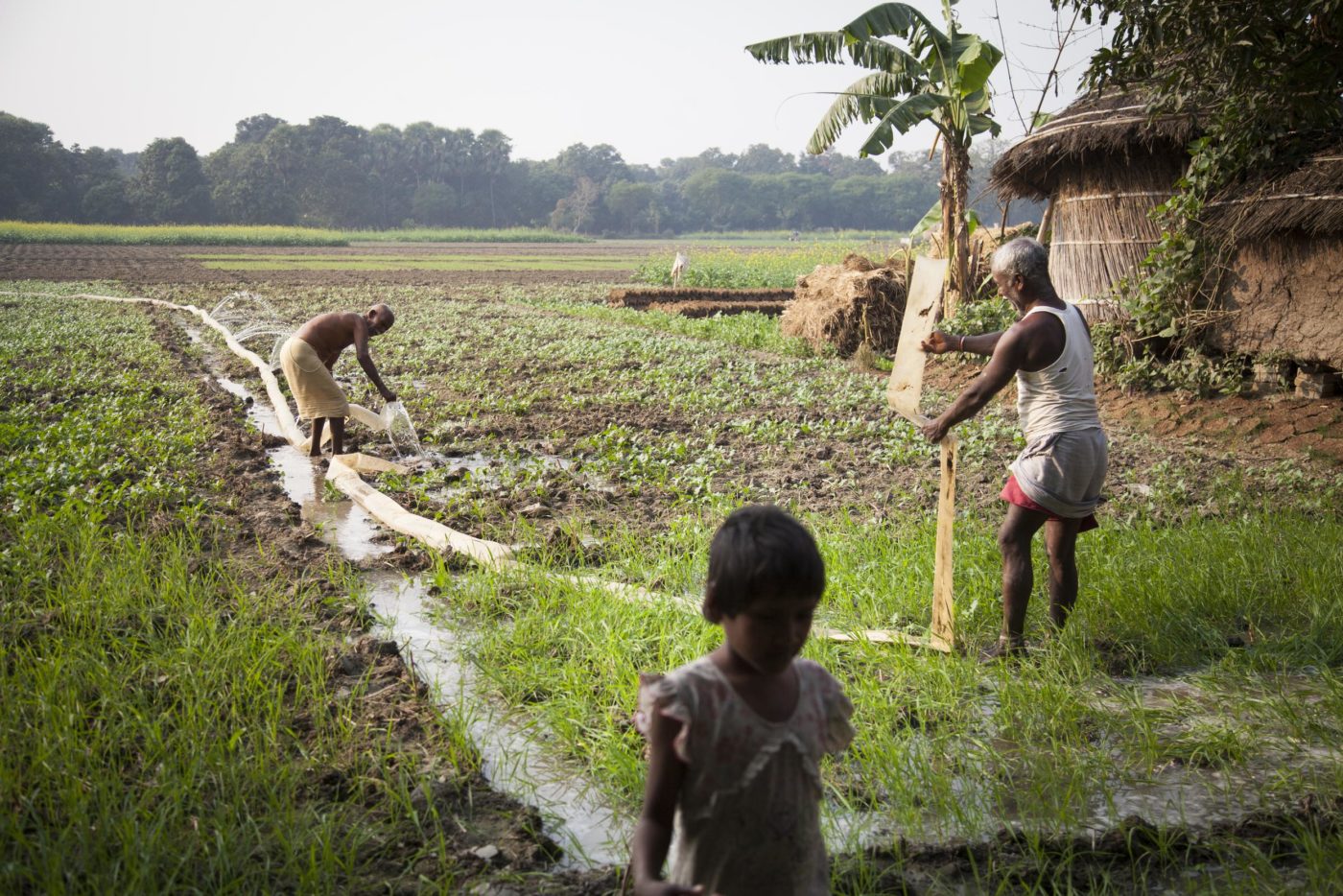 Since 2012 an online “crowdstorming” platform, Jovoto, enabled logo design contests and the creation of mobilization ideas. Could the process be adapted to take on a complex engineering problem? How do you design an affordable, portable, robust, locally serviceable water pump powered by clean energy that can deliver enough water to irrigate one hectare of typical produce in Bihar, India from a depth of 5 meters?

The small team led by Ingo Boltz of Innovation Lab and Manish Ram of Greenpeace India wondered if you could turn this highly specific, complex engineering task into to a contest. Would people show up for the game? 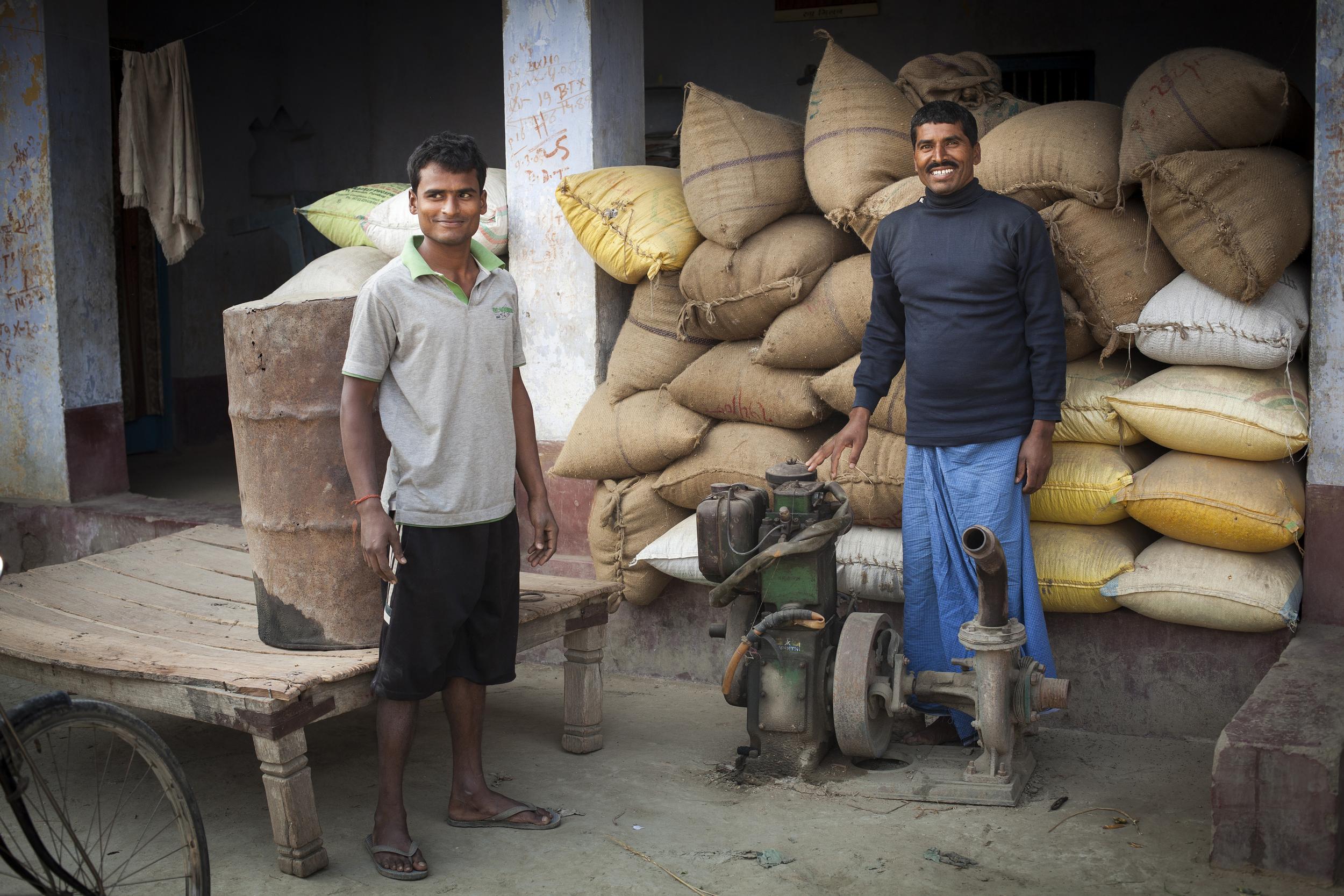 It took nearly a year of talking to farmers on the ground and experts on irrigation and pump technology to define the content requirements in as simple and humane terms as possible. In India’s northeastern state of Bihar, many areas are without electricity.

Diesel pumps have made irrigation possible, alleviating farmers’ dependency on the rainy seasons. Despite their emissions, diesel engines are still the preferred choice. There are 10 million of them currently in use in the region. They are portable. Farmers can bring them into their homes at night to prevent theft.

But diesel prices have been steadily rising.

“So you get a situation where farmers have their diesel pumps just sitting there. They can’t run because the diesel is too expensive. There’s economic hardship and people are abandoning agriculture and moving to city slums to look for work, which creates problems with food security. It creates a really dire situation. Some farmers are committing suicide and leaving their families behind because of shame about not being able to provide for them,” Ingo says.

Solar pumps could be a viable alternative to the diesel pumps.

But solar pumps are expensive, have a fixed outdoor installation, and are prone to theft. Risk enough to deter farmers from investing in them.

Coopetition for the Win

Could a transformation be triggered by fusing crowdstorming and competition?

Coopetition has been buzzing around as a way to describe co-operative competition. Ingo recalls hearing much skepticism about this approach in the beginning: “People are going to go at each other’s throats on this. It’s not going to be a community,” he says.

From Sept. 3 to Nov. 15, 2013 people from all over the world answered the invitation to submit pump designs on Jovoto. More than 1,500 people participated by uploading a design (256 uploaded in total), commenting on a design, or casting votes over a two-week period once the design-submission period was complete. In total, over 23,000 votes were cast to select the top 10 designs for community prizes. 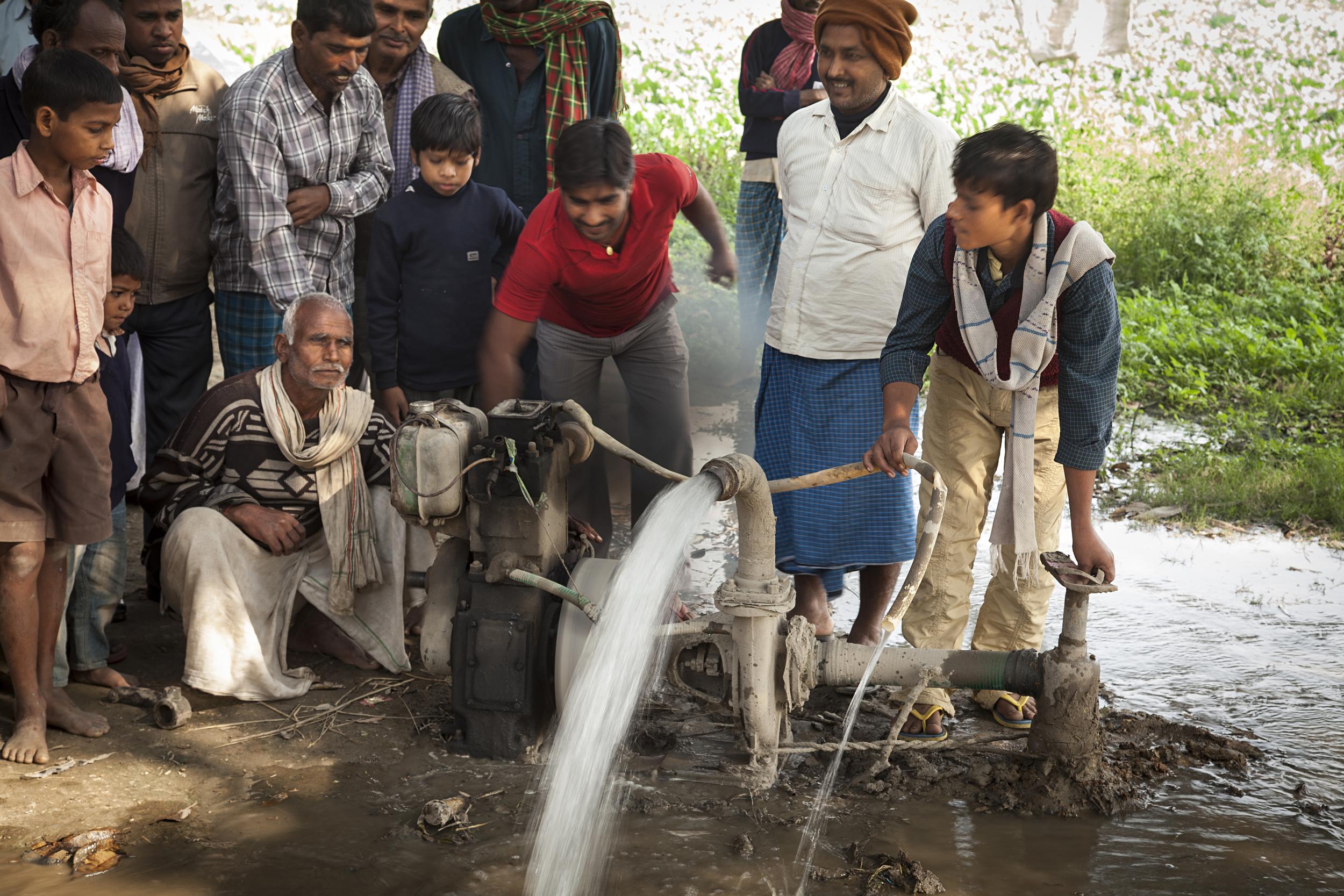 Bihar farmers demonstrate the use of a diesel irrigation pump during the post-ceremony field trip into a Bihar village, Dec. 2013. (c) Daniel Mueller/Greenpeace

Assuming the process would not be all “kumbaya” the team built in checks and balances. A competent fraud monitoring team observed voting patterns and corrected any issues where bots were active or where participants were voting up one design and voting down nearly every other design, for instance. Such behaviors contradicted the contest terms and conditions. Blatant idea-stealing could get participants disqualified. This never happened during the challenge. Too much open transparency was built in.

A 13-member jury made up of experts on irrigation, solar technology and rural distribution in India selected the top three winners:

Designers maintained a weekly log as they continued to iterate and update their designs — often inspired by participant comments. The first-prize winners met each other through this collaboration and joined forces following Vivek’s comments on an earlier design submitted by Eric Jensen, a Canadian.

“That aspect is where the value is,” Ingo explains. “They could have copied from each other, but the spirit of the platform was very collaborative and even though people competed for prizes, there was a lot of commenting going on that was very constructive.”

Did coopetition turn people against one another? “That was not our experience,” Ingo says.

Did the specificity of the problem deter engagement?

The number of submissions for this contest matched the 250-300 received in other contests. It also opened up a groundbreaking participatory process where sharing your designs early, collaborating, contributing ideas and feedback, and iteration put you ahead of participants who kept their ideas secret or tried to cheat the system. 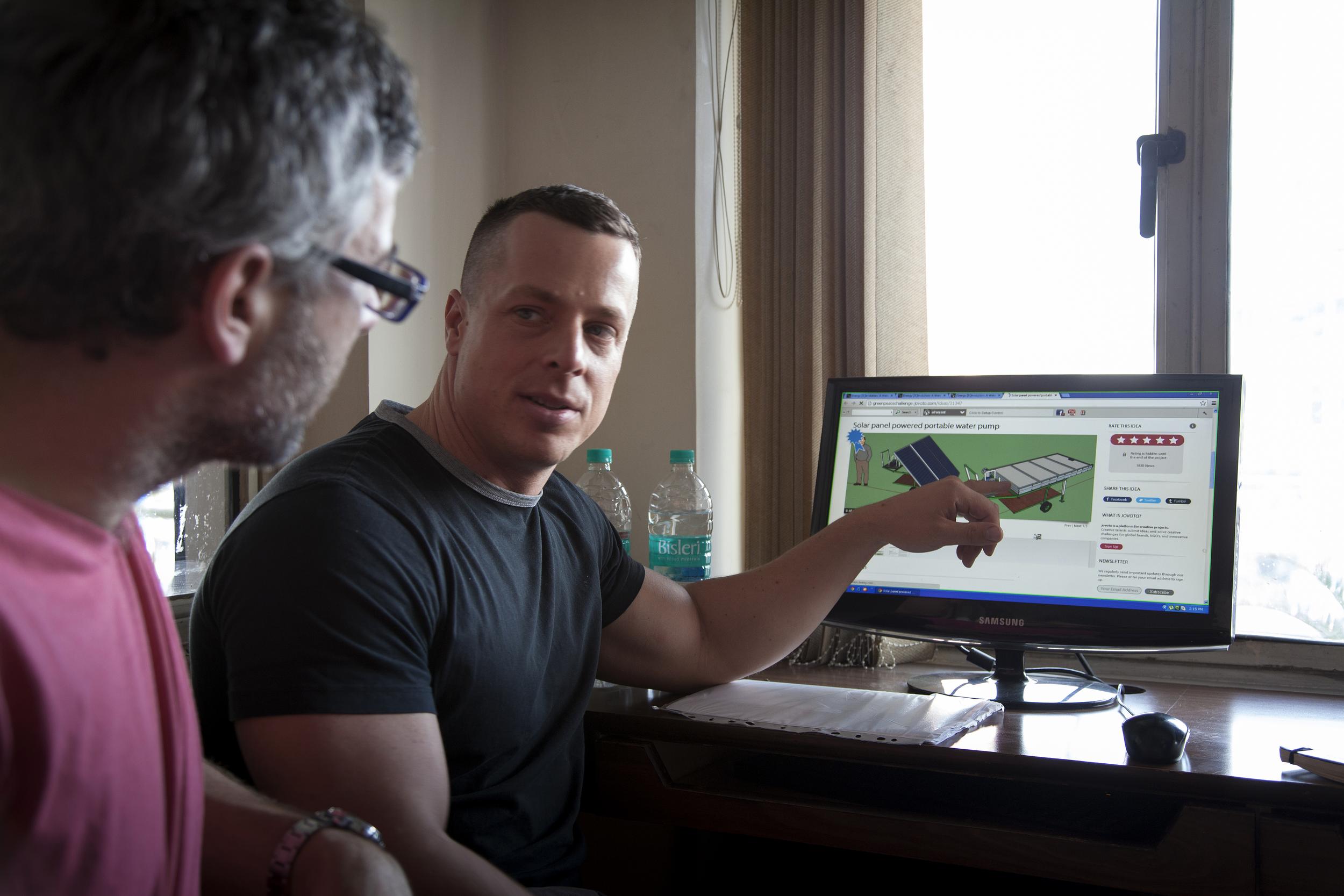 The day after an award ceremony in Patna, the capital of Bihar, on Dec. 12, 2013 winners journeyed with the challenge team to meet with farmers inside the village. Conversation sparked as farmers showed designers exactly where they would be using the pumps. Shedding light on tiny details, like the size of cart wheels, spurred what seemed like an ad hoc design workshop that got designers itching to get back to the drawing board to improve their designs again.

“I thought that was quite beautiful to see,” Ingo says.

“There’s this idea that the poor farmer in India is this laborer who’s working by the sweat of his brow every day, surviving on the barest minimum. But compared to a city person, they lack nothing in smarts. You talk to them and they know exactly what they need. You’re not there to educate them. You’re there to listen to them, because they know what’s needed and much better than you.”

If the team had approached farmers about purchasing an unproven solar technology arguing that what they’re currently using damages the planet, they would say, “Yeah, come live in my village for a week and you’ll know that I can’t do that,” Ingo says. 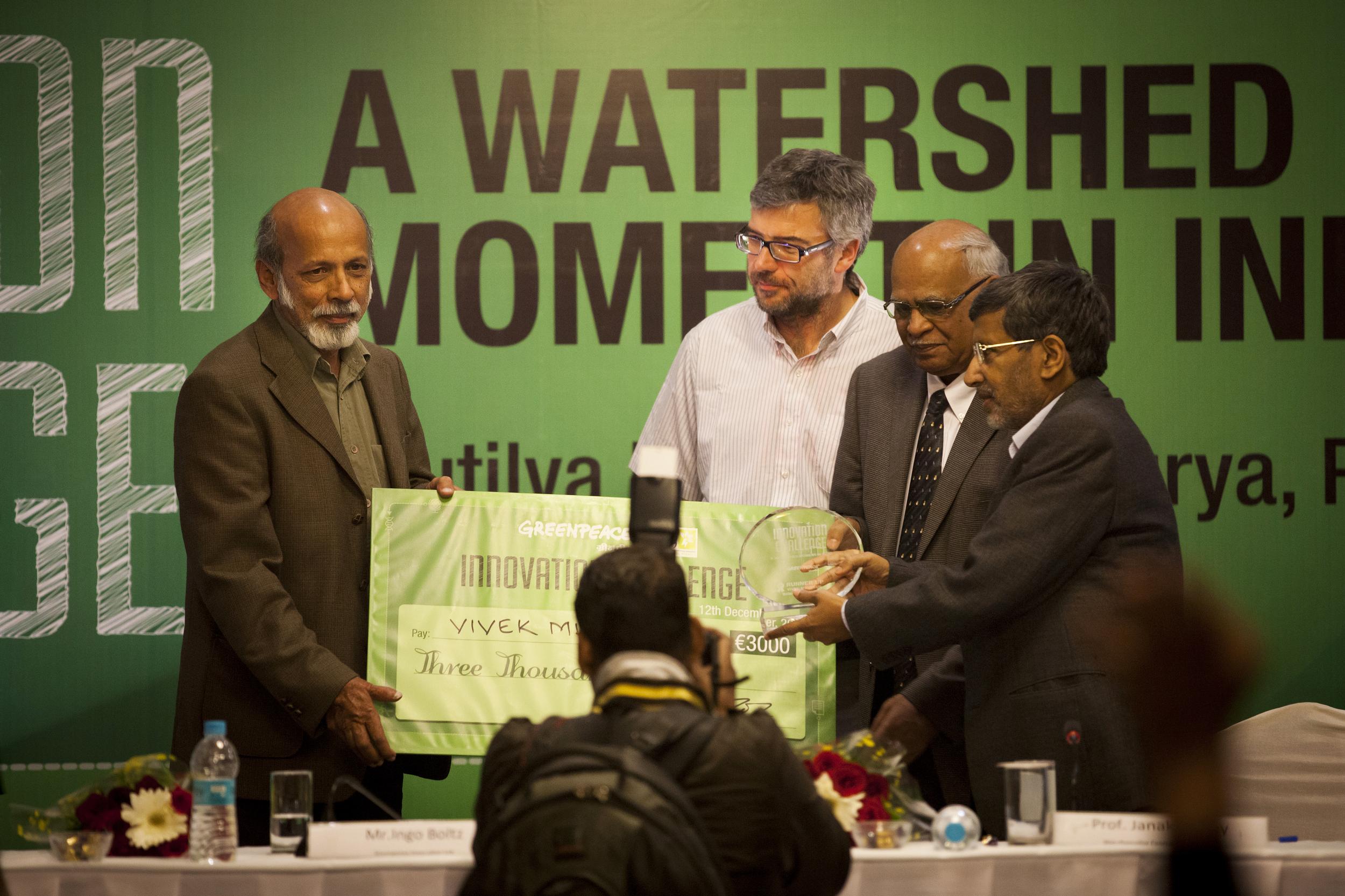 “But if we give them something that helps them economically and has the environmental benefit on top of it, then we can start talking.”

The next step is to get enough solar pumps into the hands of farmers through commercial channels so their use could reach critical mass.  With enough recognition of their value, more entrepreneurs might be motivated to come in and eventually Greenpeace could step back, as with the successful design and marketing of HFC-free fridges, one of Greenpeace’s little known but huge successes.

The challenge already impacted the business of second-prize winner. Since Vivek Mundkur received profile through the competition, interest in his solar panels jumped. He says his cell phone doesn’t stop ringing. Before the contest Vivek wasn’t able to get bank credit to assist in getting prototypes to market. The bank refused because there were no documents certifying his product. This changed when he was able to add a “2nd Prize Greenpeace Global Pump Challenge” sticker on the box.

Given such needs among entrepreneurs, Innovation Lab plans to implement a larger scale field testing process for all prototypes (not just winners) and to others in India interested in commercializing their product. They also plan to hold a clean pumping fair in Bihar, where pumps that have run through the field testing process can be showcased to farmers and tested by them.

UPDATE April 24, 2014: Second prize jury award winner Vivek Mundkur from Pune, India recently launched his pump design into the commercial market. Together with his small company Atom Solar, the one-horse power portable solar water pumping system is now available for purchase at an affordable rate for small-scale farmers, especially in regions with unreliable electrical supply and commonly affected by erratic rainfall or drought. It offers “a game changer solution to revolutionize agriculture,” Vivek says in a short video that demonstrates the pump in action. The Atom Solar Sun-trolley can be assembled within 10 minutes and can pump out 10,000 litres of water per hour. 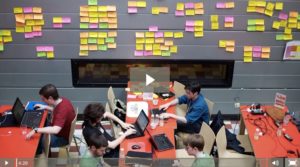 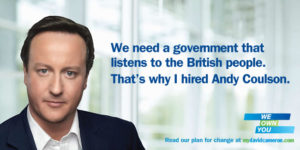