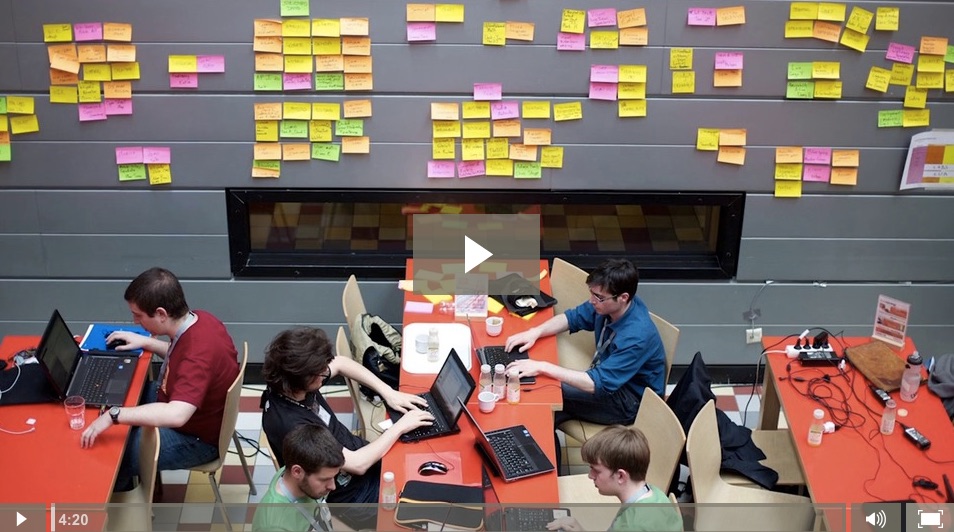 Can you track vessels in open sea when they switch off their tracking system? What do they do when they don’t want to be found? How can people actively take part in our actions from their computer?

That’s the opening of an invitation to designers, developers and other technologists asking them to participate in the Oceans of Data hackathon organised by Greenpeace Netherlands in last November.

The Greenpeace Netherlands team is looking at ways to solve two critical technical challenges that it doesn’t have the ability to solve itself. One is tracking supertrawlers on the high seas and the other is finding ways to better engage networks of people in direct actions.

The Hackathon would help address these needs and also start building long-term relationships with new communities (namely developers and designers). The Hackathon team planned to open up their advocacy strategies to developers and give hackers meaningful problem solving roles.

After the Hackathon, Marleen van der Zanden, Digital Activism Intern at Greenpeace Netherlands and a lead organiser of the event, sat for an interview with the Mobilisation Lab’s Emily Hunter and spoke about goals, how the hackathon promoted transparency, and results of the event.

Watch the interview with Marleen van der Zanden below.

Oceans hackathon participants were given two technical challenges. The first was to develop ways to identify and track trawler ships on the high seas, specifically those ships that don’t use or turn off their AIS tracking system.

Trawlers running without satellite tracking can operate in protected areas without being monitored, presenting a huge obstacle to enforcing fishing laws. Ineffective monitoring (and enforcement) is a key source of overfishing.

The AIS data team proposed several solutions and are continuing their work. They are gathering open source AIS data and using AISHub to create a platform for data sharing to help build a tracking network. The team is also finding tools to identify and analyse gaps in AIS data (the presence of which indicates suspicious activity by trawlers). 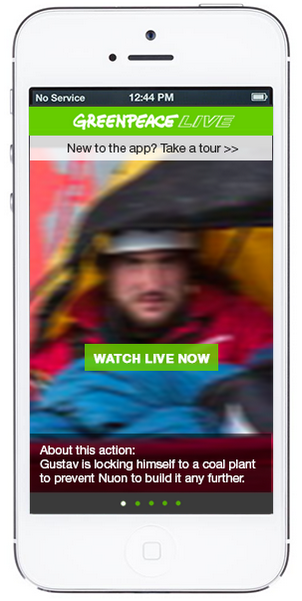 A screenshot from the Greenpeace Live app idea demonstrated at the Oceans of Data Hackathon. App users can follow and interact with people participating in direct actions.

The second challenge asked participants to create ways for activists and supporters to interact with people engaging in direct actions (climbing the Shard in London, for example).

This team proposed a Greenpeace Live system that could send out GoPro video from a direct action participant while letting users of an app not just view the video but also talk to the action participant. The aim here is to give people more direct ways to engage in actions than getting an email, reading a tweet or even watching a livestream.

The technical outcomes of the hackathon are potentially important advances in ocean protection. But creating lasting relationships with developers and designers through a hackathon is creating opportunities spread the word about ocean conservation in the developer community  solve other campaign problems with ongoing support from the community and even rethink strategies through the lens of diverse code and design professionals.

“In contrast with other hackathons that I know, the Greenpeace hackathon aimed at resolving real problems. That made it even more interesting, because the results could be implemented in real life, while the results of other hackathons are often (only) nice websites or apps, or try out or combine new techniques.”
— Oceans of Data Hackathon participant

Anne Boon of Greenpeace Netherlands describes a growing interest in working with Greenpeace among the local developer community. Boon wrote in an email that “the ‘digital world’ was waiting for Greenpeace. We have been invited by all kind of organizations to talk about our Hackathon, come up with challenges, share our research questions, and more. People are asking to help with research and data analyses. For instance, we were invited to talk about the Hackathon and future plans at the Waag Society – Institute for Art, Science and Technology.

Hackathons aren’t the best solution to every technical challenge faced by campaigners, of course, and can require significant resources to organise. The Oceans of Data Hackathon team shared a guide to planning and running hackathons as a resource for others at Greenpeace and other groups. It’s well worth checking out.