#StopTheFlights: how we forced airlines to pull out of the Rwanda scheme

A behind the scenes timeline of the strategies and tactics Freedom From Torture used to #StopTheFlights that would deport refugees to Rwanda from the UK. 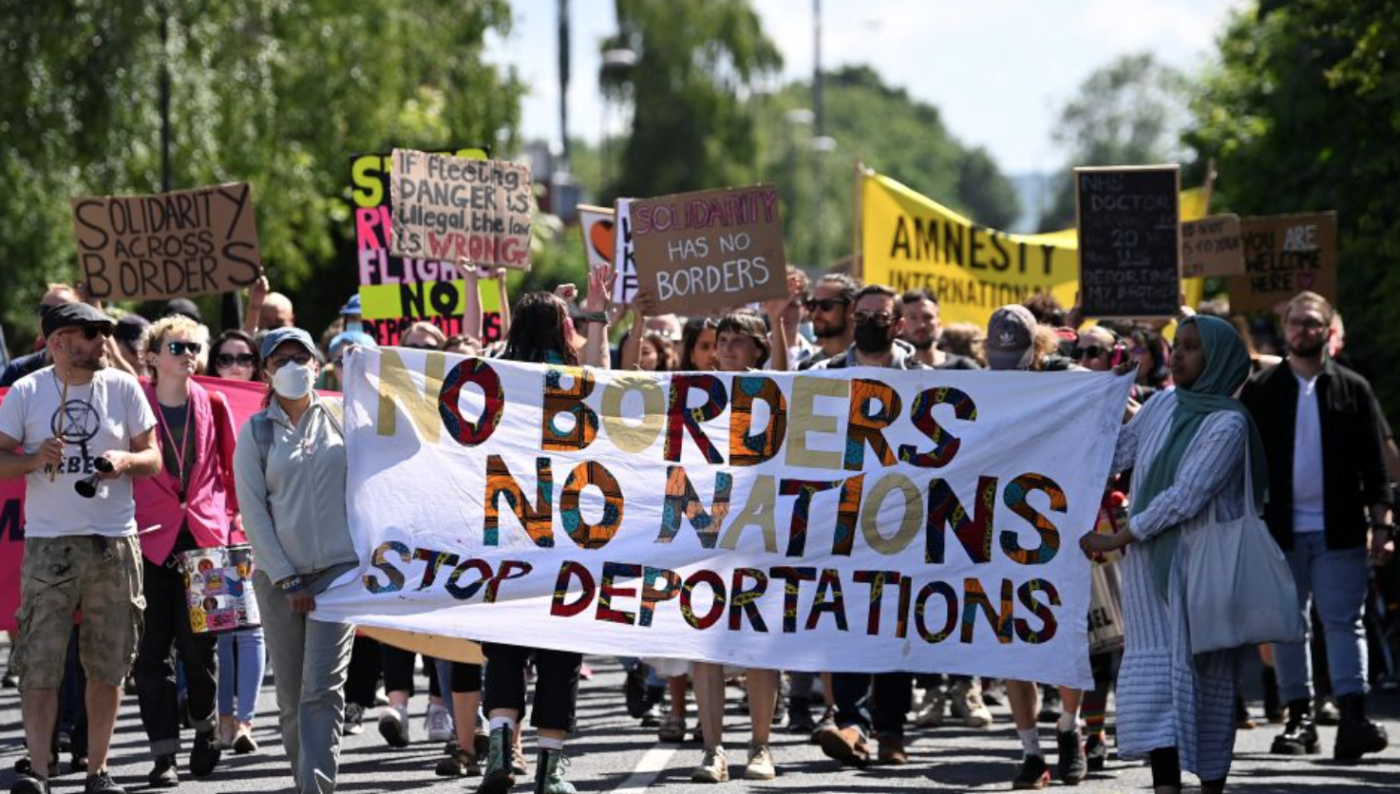 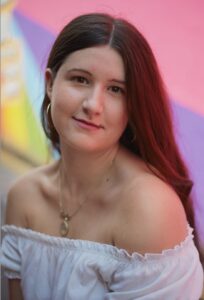 There was outcry when Priti Patel announced the Conservatives’ cruel cash for the Rwanda plan in April. But the government believed their voters and members would support it every step of the way. They’d just got the anti-protest Police and Crime Bill through parliament and we’d been unable to defeat their anti-refugee bill. But for people to be sent to Rwanda, they’d need planes. That’s when we looked to the airlines.

After a six month campaign, we forced the government’s chosen airline to say they would not profit from the pain of refugees, alongside other airlines known for flying refugees out of the UK. Here are some of the things that helped lead us to victory in the hope they help others to win.

Campaigners have found it difficult to influence a Conservative government with a massive majority. There are a few exceptions – such as Marcus Rashford’s school meals campaign or the Overseas Operations Bill – but on the whole, traditional charity campaigns focusing on Parliament have been unable to secure a change of course from the government.

So when Priti Patel announced the Rwanda plan, we got creative in thinking how we might be able to stop it. We came to the conclusion that it would be far easier to influence companies that worry about their public image than this government without an election on the horizon.

By researching online and reaching out to grassroots activists with experience pressuring airlines over forced flights, like SOAS Detainee Support, we were able to decide on four potential airlines who would fly refugees to Rwanda. We looked at what made them tick – who their staff were, how they talked about themselves, whether they had shareholders and who their customers were. With a name like Privilege Style it wasn’t hard to work out that they wanted a high-class image.

After spending a worrying amount of time on the CEO’s Facebook page, we had seen photos proudly posted of Spanish sports teams using Privilege Style’s planes. The fact that they were a private airline based in Spain, with no UK staff or customers presented a challenge. But we saw opportunities in their love of VIP customers, their small size and relatively small PR output.

Don’t give up, escalate

We set out to use people power to win because we believe people power can change the world. But also because in an era of Donald Trumps and Priti Patels, of racist police and anti-protest laws, showing people they still have power is our duty as campaigners. When we win, we create more people who go to work and the voting booth knowing they can change things. There was no doubt we’d need people in the UK to prove that the Rwanda plan was a threat to airlines’ public image and profits.

Like many NGOs, Freedom from Torture didn’t have huge campaign budgets we could tap to pay for a big ad campaign about these airlines. What they did have, though, was people power: three years of creative digital mobilisation had grown their email list from 40,000, to over 160,000 people. We knew this was the place to start. We sent out asks to the list, and thousands responded – with over 30,000 emails sent to the four companies we knew were most likely to be used by the government. Then we began to call the airlines out on social media – tagging them in posts on Twitter, where customers and journalists could see. We highlighted the religious leaders and human rights experts who were against the Rwanda plan and made sure we got a lot of interaction to show the world was listening.

This clearly had some impact. Airtanker ruled themselves out, and then Titan Airways followed suit. But the other airlines remained quiet.

It was time to turn it up a gear. As the first flight approached, we asked thousands to call the airlines and we coordinated an open letter from celebrities, artists and writers to the airlines.

We discovered that Privilege Style would be the airline due to fly the first flight to Rwanda. With 24 hours to go, despite the thousands of emails, phone calls and comments and all the negative press coverage – Privilege Style was still ready to go ahead. We hadn’t brought the reality of the Rwanda plan to Privilege Style’s doorstep. We spoke on the phone and decided the only thing left to do was to…go to Mallorca. Within a few hours, both of us were on a plane, along with torture survivor and activist Kolbassia Haoussou, and videographer Rowan Farrell,  ready to storm their head office. We showed them that they could try to ignore our emails, calls, and social media comments – but we’d only show up in person.

Early on in the campaign, we used a ‘pre-mortem’ to imagine why we might not succeed in getting Privilege Style to back out of the scheme. This is a powerful tool that can help people planning projects to imagine what might cause the project to fail – and then plan accordingly. This simple tool helped us to realise we needed to keep escalating – that we needed Privilege Style to feel the heat in Spain, in person, at their doorstep – not just on digital channels.

Aim for where it hurts

We were quickly getting a lot of engagement on social media and thousands taking action against Privilege Style. Behind the scenes, we pictured airline staff getting increasingly annoyed by the emails, comments, phone calls and direct actions. But from the start, our theory of change had been about showing them the Rwanda plan was a threat to their customer base.

That’s why media strategy was key, helping us to show that we weren’t just speaking to charity supporters, but that other airline companies and customers were going to be reading that Privilege Style profits from the pain of refugees.  When we went to Spain, that felt like a turning point. Incredible lawyers had successfully got refugees off of Privilege Style’s plane supported by refugee organisations across the UK. And now with any luck, Privilege Style’s CEO was reading a torture survivor call him out in his local newspapers – in front of friends, family and business competitors.

We began to target their Spanish customers as well, starting an open letter to Spanish football teams telling them to not use the airline and mobilising people to tweet the teams about Privilege Style. We even went to a Real Madrid vs Barcelona match to speak to football supporters. We launched a spoof website with Google Ads so that when people searched their name, they saw the truth behind Privilege Style’s VIP image. 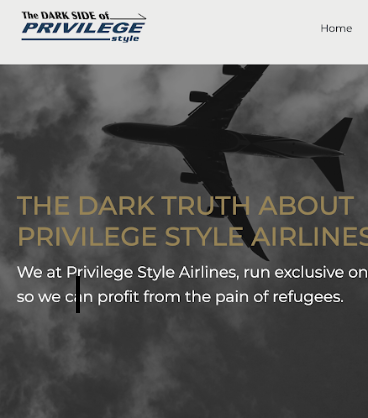 Campaigners often talk about picking the right messenger to deliver our message – and as far as we’re concerned, those affected by the issue are the best to speak on it. Privilege Style weren’t likely to be worried about being confronted by an academic expert on refugee rights, but you’d hope most humans would listen to a torture survivor when they spoke about this issue. Kolbassia, Director of Surivior Empowerment at Freedom from Torture, led the storming of  Privilege Style’s HQ in Mallorca, Spain.  As we pulled out the banner next to Kolbassia we said – ‘there could be torture survivors on that plane, and you still have a chance to do the right thing.’ That felt powerful.

It was incredible to see Kolbassia profiled  in the Spanish press calling out Privilege Style. Kolbassia’s phone was ringing off the hook with refugees congratulating him for taking brave action. This had a knock on effect on campaigns in the long term: suddenly torture survivors had seen how they could take powerful but peaceful direct action and the impact it could have. Sepideh, another survivor, was inspired to interrupt the world’s biggest aviation conference to call out Privilege Style just two months later. “People with lived experience should be at the heart of any campaign because what they have been through makes them experts,” says Sepideh.

As Fred Hampton said, the way people learn is through “observation and participation” – we can tell people they can resist all we like, we can teach theory all we like, but seeing and doing is what matters. We hope torture survivors and refugees can feel the power they have from this campaign.

Victory – but what next?

After 6 months of campaigning, on October 18th we suddenly received our first ever message from Privilege Style. They would not fly any planes to Rwanda. We were pretty taken aback! It was described as “another blow to government hopes of implementing the Rwanda policy” just days before Rishi Sunak took office as the new Prime Minister.

Freedom From Torture will be calling on HiFly and Iberojet to rule themselves out too over the coming weeks and standing with other refugee organisations taking the government to court. Freedom From Torture is also setting up an organising programme to build a movement of thousands of volunteers across the UK and we hope this win inspires those that get involved. Rishi Sunak says he’ll do whatever it takes to get refugees sent to Rwanda. Well, we know that many in this country will do whatever it takes to stop him.

For us, this victory shows that people power can defeat corporations even when campaigning is under attack. We are inspired by the incredible workers up and down the country taking on their bosses – from nurses to train drivers to posties. We also know the success Unite the Union has had in so-called leverage campaigns, which use embarrassing information about a company as a bargaining tool in negotiation. We think it’s high-time more campaigners and non-profits went after companies doing the wrong thing and got creative in the process. When our movements are being consistently defeated, we lose some of our most dedicated people – so when we can beat corporations easier than governments, why not do it? Some had hesitations about taking on companies, but we must be bold and brave – there is too much at stake.

We know we haven’t stopped the flights to Rwanda – especially now that the court has, for now,  ruled the scheme lawful. That verdict will be appealed – but whatever the outcome, there is still a long battle ahead, and no one person or organisation can stop this scheme alone. Like most change, it will take all of us – in all kinds of ways. But together, we will win.

A brief timeline of our campaign

This article was co-written by India Thorogood, Jack Steadman, and represents the collective work of Freedom From Torture and their partners.

India is a campaigner and mobilisation specialist with a decade of experience. She was Head of Mobilisation for Labour’s last General Election campaign. 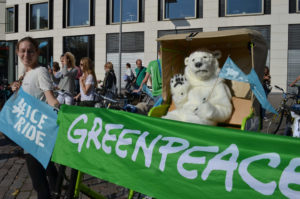 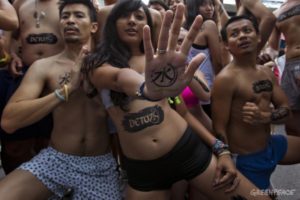