Activists in the global south talk about integrating social media and offline networks to campaign with limited internet access under repressive regimes.

Egyptians who ousted Hosni Mubarak in 2011 did not decide to occupy Tahrir Square after spending a day chatting on Facebook and Twitter. They spent years building alliances and an infrastructure that could stand up to the regime’s censorship and repression. Social media supported alliances and infrastructure–becoming the right tool at the right time.

Six years later, social media connects activists, organisers and NGOs seeking change around the world. In many countries, however, social media access remains a privilege. Smartphones, laptops and internet access can be very expensive. “You can buy a motorcycle or an acre of land for the cost of an iPhone 7,” said Philip Kabuye, IT support and research officer at Action Aid Uganda. 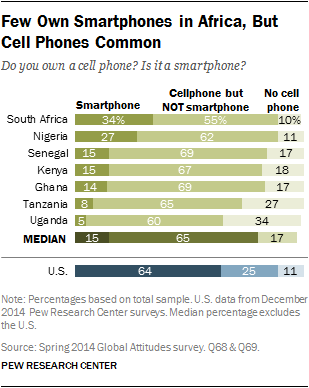 Physical spaces are critical to campaigner networks. They’re often the only alternative for those living under repressive regimes. And as digital surveillance becomes normalised, organisers in the West find face-to-face networks an essential complement to their online communications. Integrated use of physical objects (think T-shirts, billboards and “pussy hats“) and social media symbols like hashtags become ways to extend the reach of digital campaigns in difficult environments.

We spoke with activists and organisers from several parts of the global south to understand how they see social media and offline networks working together in locations with repressive regimes and/or limited access to social platforms.

Traditional media outlets operating under repressive regimes find it difficult to give their audience the whole story–if that is even their goal. Radio, television and print news outlets are sometimes state-owned. Larger independent media houses may experience intimidation. Their response is often self-censorship.

Governments find it much more difficult to influence social media–though it happens.

“The strength of social media is that you reach a large amount of people fast, often with primary information,” said Rachael Mwikali, a Nairobi-based feminist activist.

The fake news epidemic demonstrates that destabilising the truth can be an effective government (and campaigner) response. Hence, censorship is just one problem campaigners face when using social media. And shifting perceptions in social media (and offline) is a powerful tactic.

The power of the perceived reality

Famed community organizer Saul Alinsky wrote in Rules for Radicals, “The threat is more terrifying than the thing itself.”

On August 19, 2015, Ugandan activist Norman Tumuhimbise and fellow youth activists of the Jobless Brotherhood freed pigs around Kampala, the capital city. Attached to them was a note warning the government to put an end to its corruption, lest the activists take action to make the country ungovernable.

That night, Tumuhimbise disappeared. Friends worked tirelessly to advocate for his release. Their pleas fell on mostly deaf ears of embassies, human rights groups and journalists who feared the repercussions of covering such a story.

The Interparty Youth Platform, a coalition of youth from seven political parties, took matters into their own hands. While others were busy organizing a vigil to declare Tumuhimbise kidnapped and killed by the state, they published a simple graphic on Facebook: a red X over the victim’s face under the phrase “Dead at hands of a dictator.” 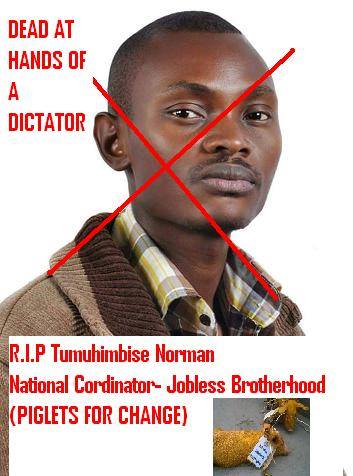 This image circulated online after Norman Tumuhimbise disappeared following an anti-government action in Kampala. The accusation that he had been killed forced the government to prove otherwise. Photo by Uganda Youth Platform.

Late that night, Tumuhimbise was pushed out of a car near his home where he had been abducted. He suffered a week of torture and dehydration in a cold underground cell. The claim he had been killed was enough to push the state to prove otherwise.

“I think the posting of that graphic online helped save my life,” Tumuhimbise later explained.

“Using social media is expensive,” said Mwikali. “We use it for advocacy, WhatsApp group discussions and fundraising, but it is not accessible to people at the grassroots.”

Perhaps this is why, during the recent political transition in the Gambia, most digital campaigning to support incoming president Adama Barrow seemed to be concentrated in the capital of Banjul.

When 22-year dictator Yahya Jammeh was defeated at the polls December 1, he initially conceded to the victor. Jammeh reneged a week later, claiming the vote was rigged. This prompted young Gambians to share information on Jammeh’s coup attempt and their resistance against it using #GambiaHasDecided.

The hashtag assisted online coordination and flow of information in the heavily censored Gambian media. Youth took the hashtag offline, wearing it on their T-shirts.

Numerous young people sporting the #GambiaHasDecided T-shirt were arrested, but eventually released. The resolve of those wishing for an end to Jammeh’s rule seemed to strengthen every day. The hashtag itself is still trending. 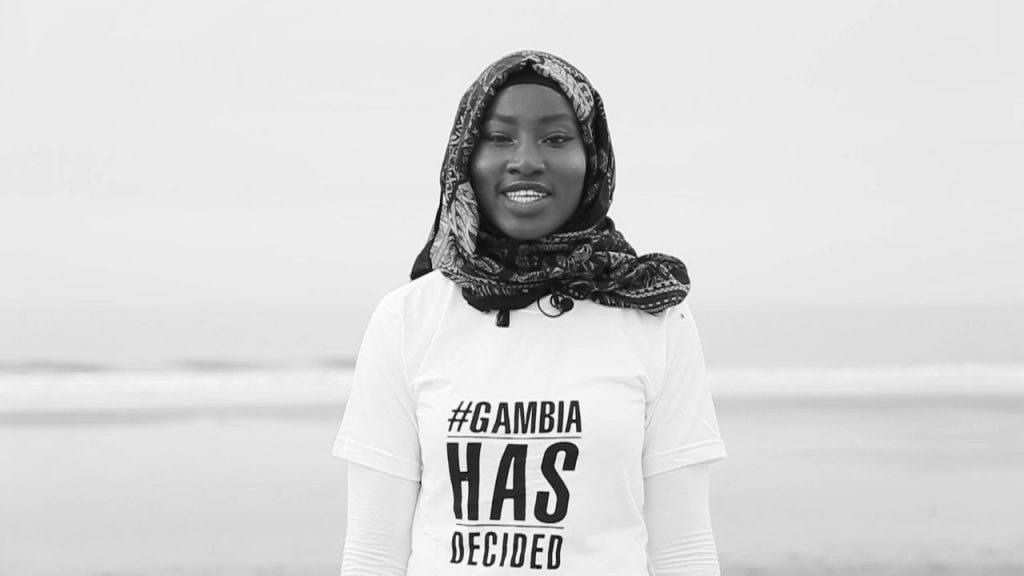 “Recently, lots of Gambian youths ventured through a deadly trip to get to Europe,” noted one Gambian activist who preferred anonymity. “They are now supporting their families. This has made many people express themselves without fear of losing their jobs. Social media has played a big role in this political event.”

Diaspora Gambians are using networks like Twitter, Facebook, and WhatsApp to collect contributions for cloth to be worn at Barrow’s swearing in. They are also distributing phone numbers to call should anyone want to receive a few yards of the cloth and attend the inauguration. The purpose of online activity is to organize offline participation.

Access to modern technology–and its use, including social media–is often concentrated in urban areas. Rural areas of Kenya, Uganda, and the Gambia have more direct ways of organizing, such as face-to-face meetings. There is little evidence that social media mobilisation will trickle down to rural Africans on a large scale, but it is certainly a starting point for young urbanites.

Using social media AND acknowledging its limited reach in marginalised communities is a good rule of thumb. Campaigners across Africa are using social media but few rely on it. The strongest efforts supplement upcountry outreach strategies with on-the-ground actions and outreach to carry messages, including face to face communications and physical objects (T-shirts are just one example).

safety and securitytech, tools and tactics 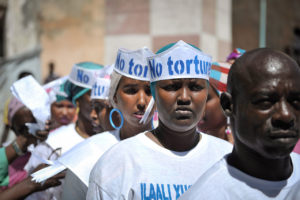 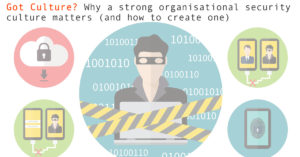