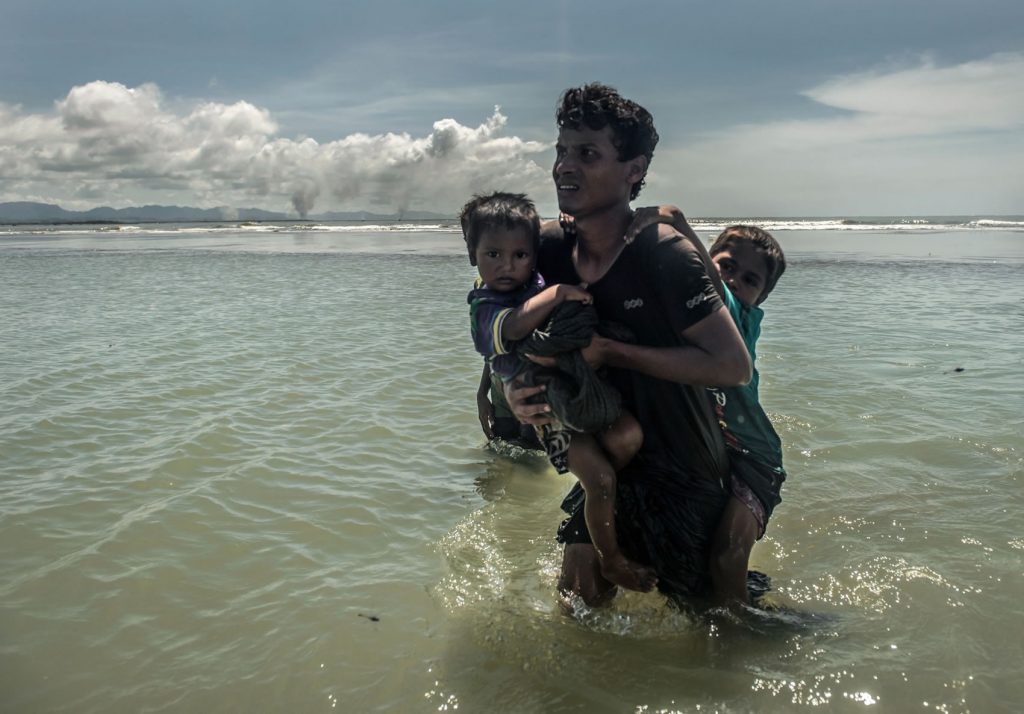 Over 600,000 Rohingya refugees fled Myanmar and streamed into Bangladesh in the three-month period of August-November 2017, overwhelming the local population. BRAC, the world’s largest—and perhaps least known—non-governmental development organisation, is quietly rolling out a comprehensive, creative, community-based aid program that engages the local community and takes unique sensitivities into account.

When the army of Myanmar expelled more than half a million of the country’s minority Rohingya population into neighbouring Bangladesh late in the summer of 2017, creating an enormous human rights crisis, BRAC, a Dhaka-based NGO founded in 1971 by former Shell executive Sir Fazle Abed, rushed in to help.

But even as it was mobilising to help the Rohingya refugees, BRAC’s staff also mobilised to help the local Bangladeshi population, which had at first welcomed the refugees and was now feeling overwhelmed. To address their rising anxieties, BRAC is launching three new micro-finance programs for local Bangladeshis. They are also establishing and reorganising new schools for their children, said Iffat Nawaz, BRAC’s chief spokesperson for its humanitarian crisis programme in Cox’s Bazar, Bangladesh.

“We try to bring the host community in so they feel engaged, and grow empathy so it’s not just an ‘us versus them’ mentality,” Nawaz told MobLab in a phone interview.

The innovative and extraordinary scale of BRAC’s poverty reduction efforts through education, the empowerment of women, and micro-finance have won Abed a knighthood from the Queen of England, accolades from other New York Times columnists, The Economist, Fast Company, Fortune, and this admiring profile by National Public Radio in the United States.

Between August and November of this year, 624,000 Rohingya entered Bangladesh. While 46,000 found shelter in local host communities, the rest are scattered throughout various makeshift refugee camps. This latest influx adds to the hundreds of thousands of Rohingya who have entered Bangladesh since 1991: These numbers have made some Bangladeshis feel besieged.

A big and crucial part of BRAC’s approach is to involve local community leaders and stakeholders in its aid efforts, to make them feel both a part of the solution and beneficiaries of the NGO’s presence.

Providing medical care in the face of enormous obstacles

BRAC is applying its community and peer-based approach to health care by sending its volunteers to seek out those who need medical help, mental health counseling, or reproductive health education. This can be a huge challenge. While some of the adolescent girls who are already mothers appear to be resilient and do spend time at the women-friendly spaces created by BRAC, “there are those who are mentally shocked, the ones who are really vulnerable, and are not coming out of their homes,” Nawaz said. 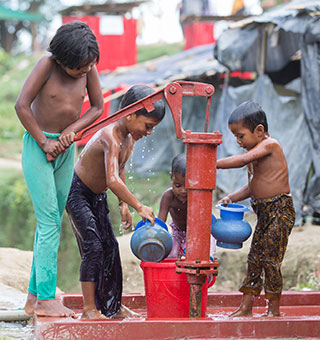 As of early November, BRAC hired 10 counselors to help these women. The plan was for the counselors to train additional staff, as well as 50 peers of these adolescents, to help out.

NGOs must make extensive outreach efforts and go door-to-door, because Bangladeshi authorities forbid the Rohingya to go to local hospitals alone. They must be accompanied by a local. So NGOs such as the HOPE Foundation for Women & Children of Bangladesh have created mobile health clinics that rotate through different sites; they are also in the process of building field hospitals.

For its part, BRAC is also creating a buddy system whereby the more resilient Rohingya teens will be paired up with the more vulnerable. The goal is to provide the girls with a network of support—someone they can confide in, but also someone to call on in case they’re faced with violence.

Disseminating information in the absence of mobile phones

Community volunteers are also important for disseminating information among a population who are officially banned from having mobile phones.

Worried about organised terrorism, in September the Bangladeshi government banned the Rohingya from using mobile phones. UNICEF and United Nations Refugee Agency (UNHCR) have signed an agreement with BRAC to recruit 800 community volunteers who liaise between aid agencies and local communities. These communications cover everything from public safety issues to obtaining help with navigating to a clinic, to notifications regarding the distribution of aid and gear.

The aid agencies also see this as a way to circumvent corrupt local community leaders, who sometimes trade on the information or aid provided to them to control their fiefdoms instead of simply organising the distribution of the aid or information, said BRAC’s Nawaz.

Mapping and planning in a remote area with little infrastructure

All of this activity has been taking place in a region of remote hills with few landmarks and no roads. The Bangladeshi government and aid organisations have had to navigate and carve out roads, pathways and infrastructure around the mass of humanity. 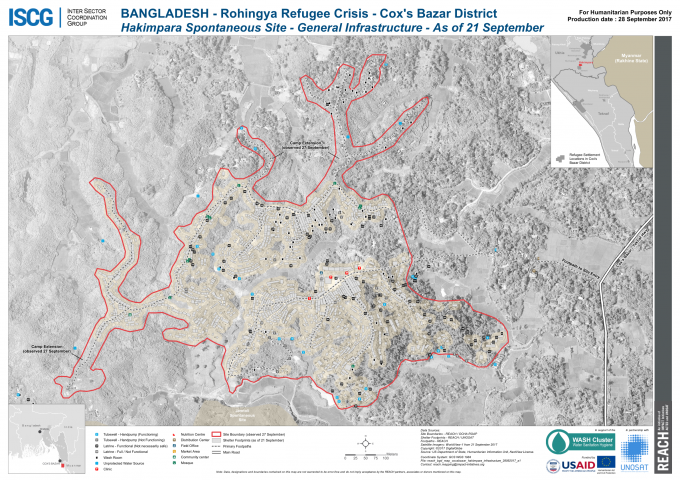 They’ve needed all this simply to get around, to establish mobile field clinics and to dispatch outreach teams.

Mobile technology is playing a crucial role in rolling out aid. It is used for counting families, keeping track of medical conditions, tracking aid distribution, managing staff, and mapping and navigating the settlements.

In early November the UNHCR, in conjunction with the Bangladesh government, completed the first phase of its “family counting” exercise. It sent out more than 100 staff to register 514,643 refugees making up 120,284 families, and tagged and numbered each family’s shelter. The goal is to help the aid agencies and the UNHCR to distribute aid and supplies more equitably among a constantly shifting population.

BRAC, the UNHCR and IOM use an open source data collection and reporting software platform called the Kobo Toolbox. Aid workers use their mobile devices to collect information, which is then shared with partners to coordinate aid distribution through the cluster approach.

All this data collection enables the relief agencies to make more coherent and coordinated resource allocation decisions in a crisis situation, as they try to aid millions of people on the move—many of whom are malnourished, wounded from gunfire, or victims of rape. 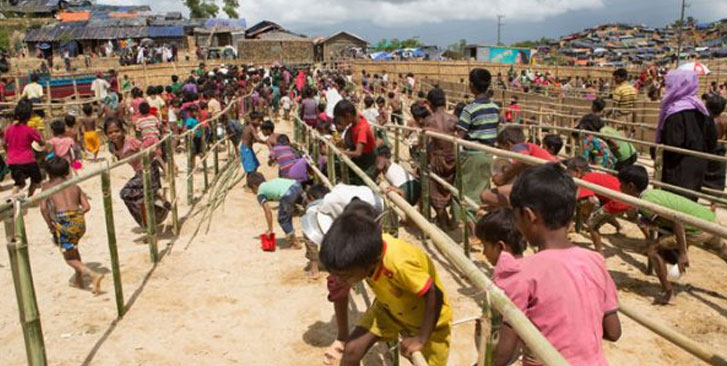 The challenge of navigating an inhospitable landscape

Navigating through the borderless landscape is a challenge for the outreach workers, explained Andrew Schroeder, Direct Relief’s research and analysis director, in an interview with MobLab.

“The geography of this place, it’s essentially for the most part, a wide-open, featureless space that has a bunch of tents that has very non-standard pathways to get through it, and is very, very crowded,” Schroeder said. “There’s a lot of concern that’s been voiced back to us about people getting lost, and about people reluctant to venture out too far out from their home point. It’s very hard to track them down and follow up if they show up for an outreach event.”

Schroeder is working on a mobile tech solution, but HOPE and Direct Relief still need to raise funds for mobile technology devices with geolocation capabilities. These will enable the workers to navigate the terrain, and also to enter the data about location, needs and attributes of the refugee encampments they visit.

“There has to be a way to accompany any [pregnant woman] that’s deemed high-risk/priority, and record the GPS of their home point so that we can start to stitch together a referral network [to other partners],” Schroeder said.

Schroeder identified the OpenStreetMap (OSM) platform as a tool that could prevent aid volunteers from getting lost. The Humanitarian OpenStreetMap Team (HOT) is a non-profit headquartered in Washington, D.C., with a distributed staff and 50,000 volunteers dotted around the world.

The U.S. State Department donated satellite imagery of the region of southeastern Bangladesh, where the Rohingya have settled in camps, to HOT, allowing volunteer mappers to log in and examine the imagery on their computers. The mappers then draw lines around the shelters, around buildings, roads and footpaths that they can see, thus creating digital maps. Some of the resulting information is downloadable here. 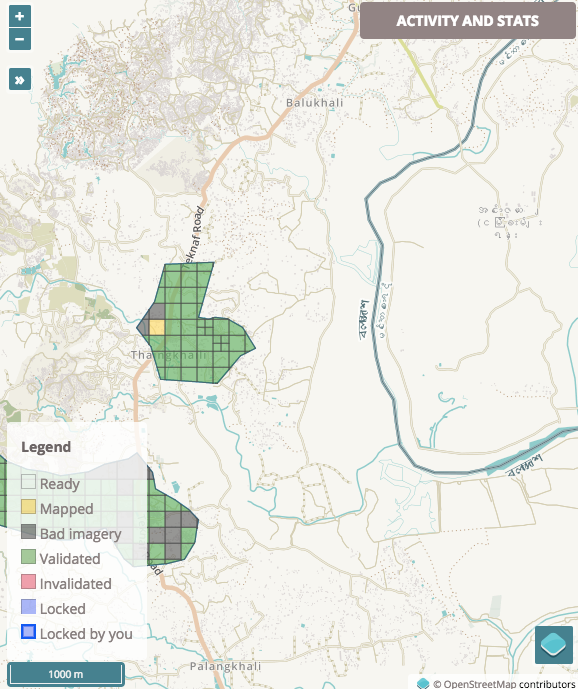 Example map developed by Humanitarian OpenStreetMap volunteers who sign up online to contribute.

As the world watches reports about the ongoing genocide of the Rohingya in Myanmar, and the resulting humanitarian crisis caused by the influx of refugees into Bangladesh, aid agencies continue to deal with staggering obstacles as they deploy a complex aid program that must take into account unique local sensitivities. BRAC is leading the way with its creative, community-based initiatives, while international NGOs collaborate with one another and with local organisations like BRAC and the HOPE Foundation to provide tools for data gathering and analysis, for communication, infrastructure and the distribution of aid.

* Readers can find out more about the financial needs of each sector of a relief effort, such as healthcare, food and nutrition, women and child protection, education, and infrastructure at this link. 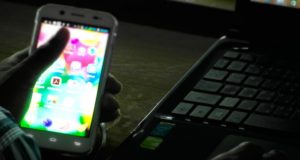