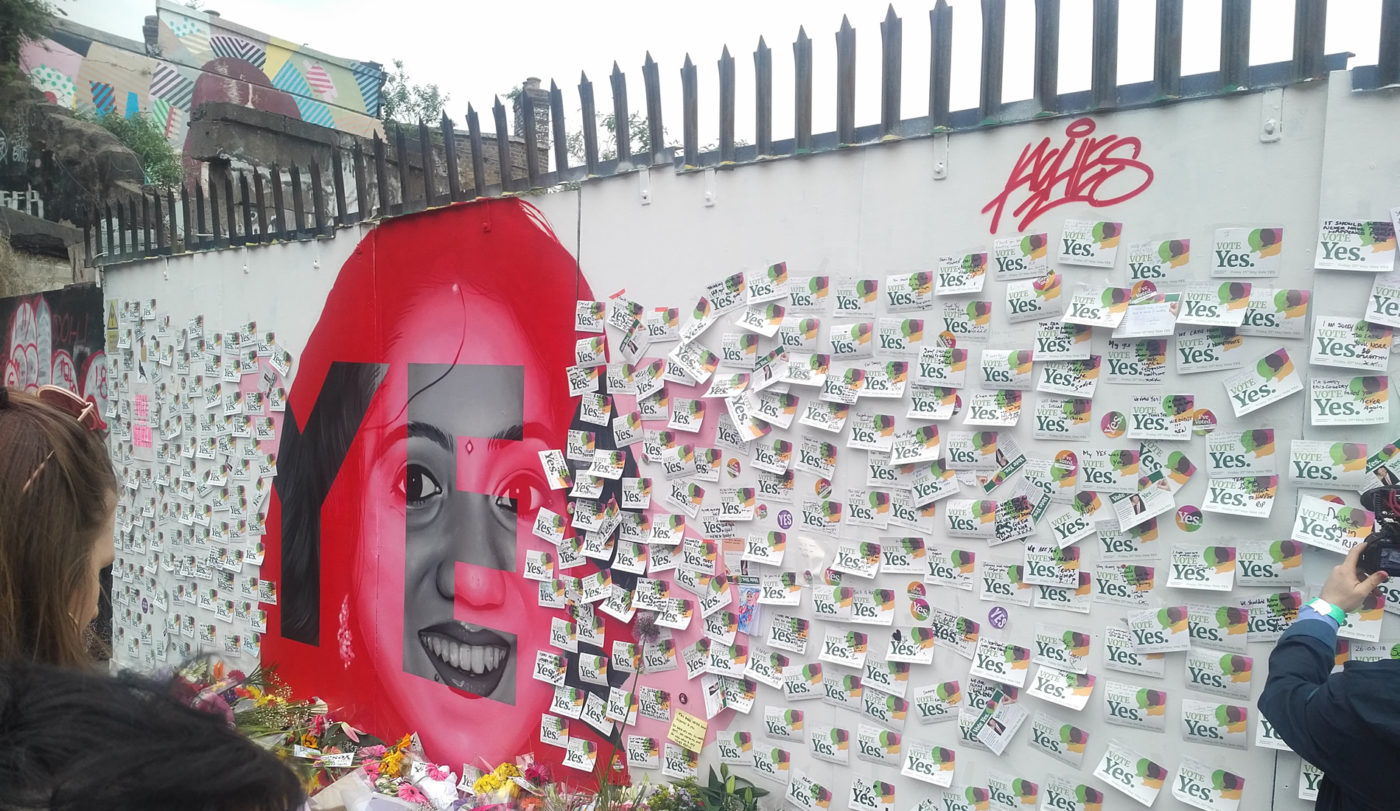 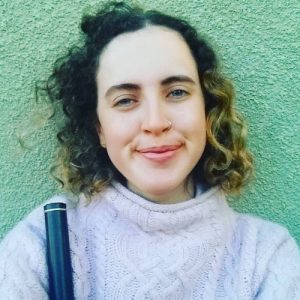 Digital Campaigner and Organiser at Uplift

In Ireland on May 25, 2018, the Yes campaign to repeal the nation’s 8th Amendment abortion ban won after receiving nearly two-thirds of the over 2.1 million votes cast.

The victory resulted in part from people across the country having hard conversations about abortion. Let’s take a look at how the campaign helped start and support the tough talks needed to shift perceptions about deeply held values.

In Ireland’s landslide win for abortion rights, a long-silent majority appeared to vote Yes. The Yes vote also won decisively in rural counties thought to be the heartland of the No campaign. Why?

After the vote, 39% of people polled about what changed their minds to Yes cited a conversation with family or friends. Thousands of people with traumatic abortion experiences broke their silence and inspired others to speak up.

But it wasn’t by accident that people across Ireland had these difficult conversations over tea, at sporting events on the weekend, in the car, after school and online. In fact, when polled in January, four and a half months before the vote, over half of voters said they would be too uncomfortable to talk about abortion with people in their lives.

The Yes campaign helped people start and maintain conversations, modeled positive values-based talk that didn’t play into the opposition’s messaging frame and ran a grassroots effort that gave people agency over their conversations.

The campaign also recognised the value of each person. In Ireland, where abortion has been banned since the 8th Amendment was passed in 1983, everyone has a story about abortion. When it comes time to vote, a person needs just one story to change or affirm how they mark the ballot.

I worked on the Yes campaign and see valuable lessons in sparking difficult conversations for campaigners working elsewhere in the world on issues that, like the Ireland abortion referendum, are steeped in centuries-old mixes of institutions, politics and values.

It’s not easy to talk about abortion on a personal level. Different people need different prompts and various levels of support.

Groups used a variety of approaches to help people start conversations. Amnesty International partnered with the Minister for Health, Simon Harris, and asked members to pledge to have conversations with those around them on itstime.ie (unfortunately the site is now retired). Local groups of the official Yes campaign held some amazing conversation cafes. My favourite tactic was so simple: the Abortion Rights Campaign produced badges for supporters which read “Talk to me about Repeal.”

Early in the campaign, we ran an online conversations training on Crowdcast. We focused on using stories and values based communication to approach undecided voters. We followed up conversations with a microsite, letstalkrepeal.ie. Engagement with these resources was strong. Feedback was also good. The program provided an accessible low bar ask for people who supported Yes and wanted to step up but not into leadership roles. 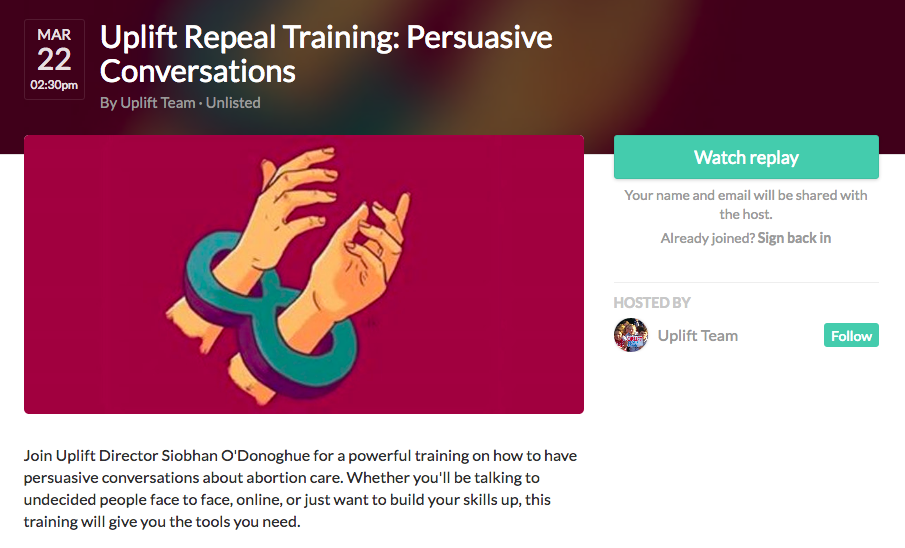 Uplift hosted “Persuasive Conversation” trainings using Crowdcast. This is a screenshot of the training registration page (you can still register to watch a replay of a training).

We launched Mobilisr, a peer-to-peer messaging program, in the run up to the vote. People used it to get in touch with their Facebook Messenger, WhatsApp, and Telegram contacts to either start a conversation about abortion care, or ask them to get out and vote. People were slow to start using Mobilisr but activity picked up once users had used the tool at least once.

By 25 May, the app converted extremely well – especially as users could select as many people in their contacts as they chose to send a prefilled but customisable message. Lightweight and adaptable, this tool shows huge promise for starting conversations with users outside of a campaign’s existing reach.

We segmented lists into people who were a Yes vote, people voting No, and undecided voters. Strong pro-choice members were recruited to have conversations with undecided voters. One volunteer trained and supported a team of “e-Repealers” who offered undecided people the opportunity to have a conversation via email using Freshdesk. Though at times a little rough and ready, this program was entirely volunteer run. The program fostered earnest and often complicated discussions between very different people.

Focus on your values and vision, not the opposition’s framing

Campaigning was organised locally but most Yes groups used messaging focused on care, compassion and change.

At Uplift we worked with Anat Shenker-Osorio to develop messaging. We talked about abortion as a part of healthcare and shared stories of individuals instead of speaking of women collectively. We also shared a vision of the society where everyone has the freedom to decide whether and when to become a parent.

The tone of the Yes campaign paved the way for powerful conversations between people on an issue that’s historically untouchable. Even the No campaign acknowledged that Yes campaign messaging grounded the debate and prevented it from becoming as toxic as it could have been.

The Abortion Rights Campaign, one of three partners in the official Yes campaign, is an unashamedly radical organisation with no paid staff and a flat structure. Local groups have a strong sense of campaign ownership built through years of distributed community organising and grassroots fundraising.

But a campaign with few paid staff still needs leaders. The referendum campaign facilitated opportunities for people to step in, learn and take on campaign roles. The challenge was in finding lightweight, scalable and impactful ways to connect and resource them.

A voter only needs one story in mind to vote Yes

In the end, the aim of the Yes campaign was to make space for brave people to talk about their abortion care experiences in a country that banned abortion. We also created a situation in which those stories would have power.

Together4Yes and campaigning NGOs like Uplift and Amnesty International targeted personal story video ads on social media. We gave particular weight to stories of “hard cases.” These included people who were pregnant as a result of incest or sexual assault and cases of fatal foetal abnormality. These stories were so powerful with undecided voters that the No campaign tried to do a double-take in the final week and argue for a compromise that would enable abortion in those cases.

In Her Shoes, a volunteer-run Facebook page, is a great example of how people created a way for others to share personal stories. The format was simple. People sent in their story with a picture of their shoes. Posted anonymously, these stories went viral again and again. It became possible for people to feel surrounded by anonymous women, wearing Vans, sandals, runners and heels, who’ve kept their struggle secret from those around them for years.

By far the most powerful story of the referendum campaign was that of the late Savita Halappanavar. Savita’s parents shared their daughter’s story in one of the most watched videos of the campaign. In it, they called on the people of Ireland to remember their daughter and vote Yes.

Halappanavar had a septic miscarriage and was denied a requested abortion in a hospital when it was determined that her life was not sufficiently threatened. She died shortly thereafter. Eight percent of Yes voters polled by Irish national broadcaster RTE said they voted yes because of Savita.

In the same poll, 43% of Yes voters said people’s personal stories in the media convinced them. 34% cited experiences of people they knew. Creating safe and respectful platforms with reach for these stories was crucial to the success of the Yes campaign, and gave people the tools they needed to talk to those around them.

As a woman living in Ireland, knowing that this fight was won by the people around me makes me feel that broken trust is now mending. Reflecting on the campaign, many have said that the country is changed forever: stories have come to light that will never be hidden again. In listening, and acting compassionately, we’ve gone through a catharsis.

As an organiser, this campaign taught me that it’s valuable to pick moments when people are passionate and ready to act. As important is providing tools for people to follow through on that passion by connecting with people around them: family, friends and social networks.

Top photo: A mural outside the Bernard Shaw Pub in Portobello, Dublin depicting Savita Halappanavar and calling for a Yes vote in Ireland’s referendum on repealing the Eighth Amendment. By Zcbeaton via Wikimedia Commons. CC BY-SA 4.0