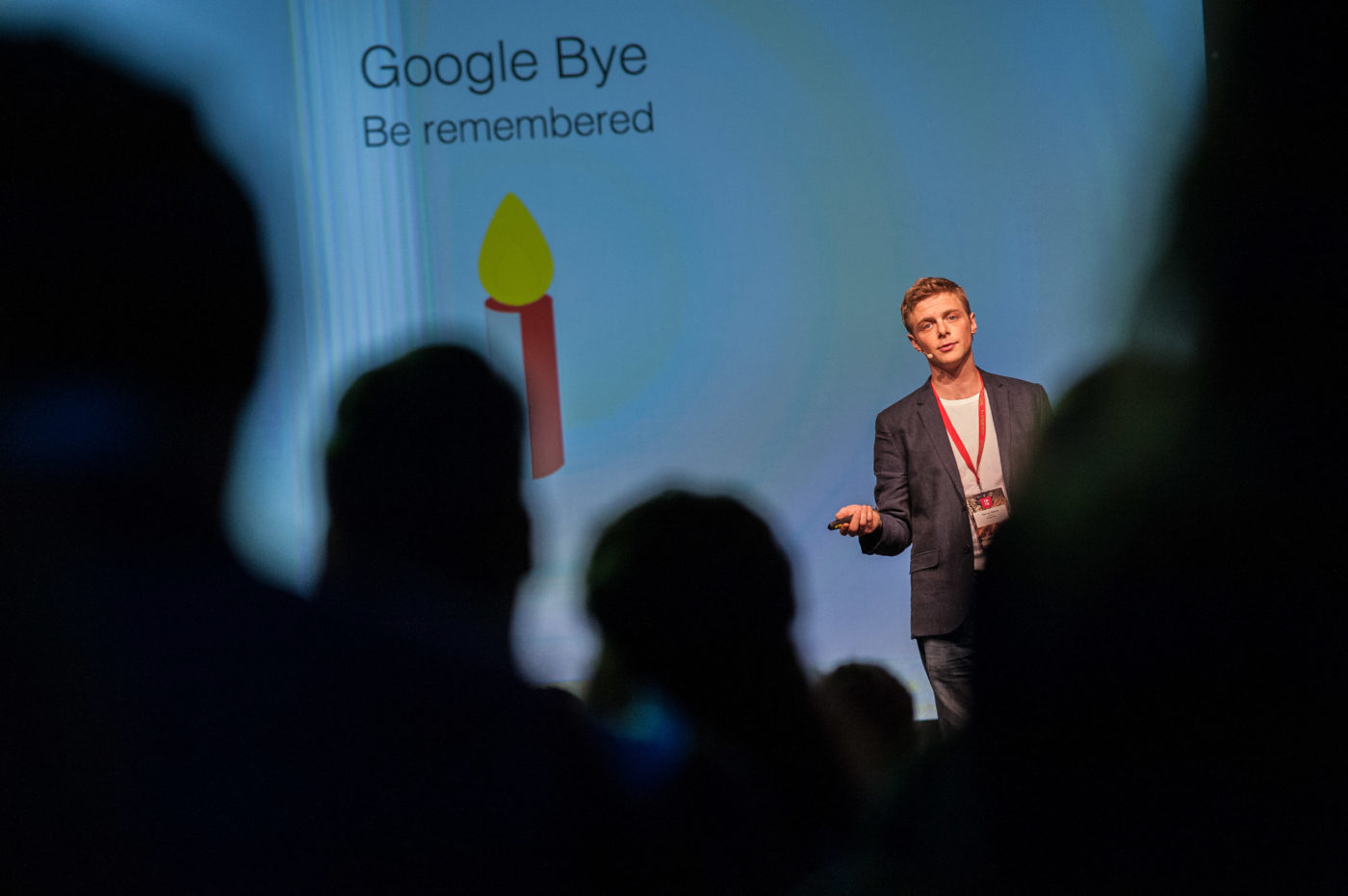 When activist duo Jean Peters and Faith Bosworth of Peng! Collective presented a spoof line of “new Google products” at a major media conference in Germany this spring, they demonstrated an innovative way in which free agents and activist groups can work with established NGOs to drive change.

The unconventional approach the activists took at Berlin media conference Re:publica stimulated a lot of media attention and garnered collaboration with others including political figures. They did this with no budget and admittedly, some creative chaos at play.

How did Peng! pull it off? 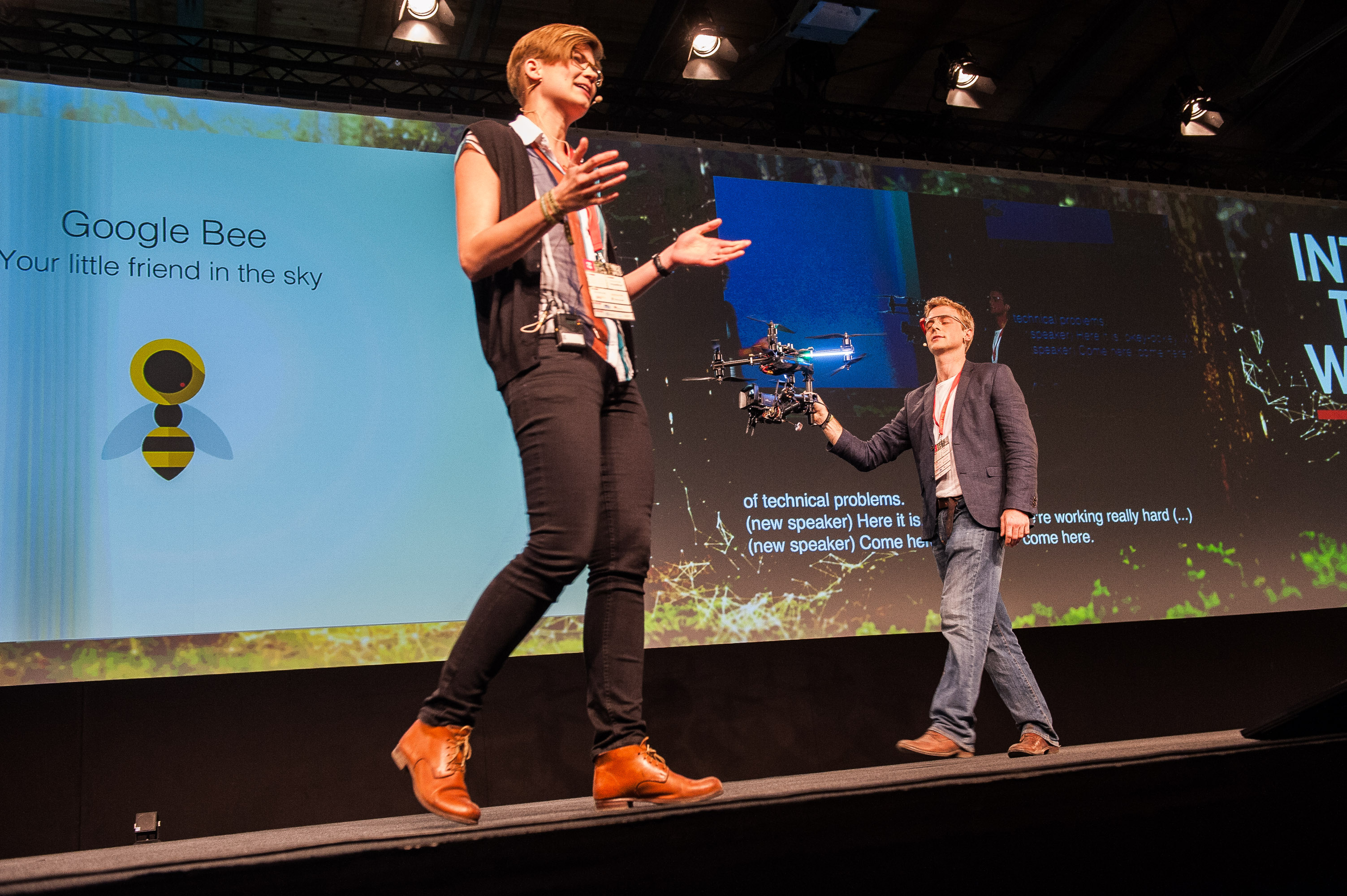 On the day of the presentation, three politicians issued responses to a spoof press release the activists issued, denouncing the new Google Nest products. Two digital rights NGOs in Germany did the same.

The seeds of this collaboration were planted when Jean met the politicians at a party. The willingness to play along that Jean encountered struck him. Convincing people seemed effortless.

Jean also met a well-known German actor at the party, who came to play a key role in the audience during their demonstration of Google Hug — the Google Nest product that tracks your feelings and location at every moment and matches you with the perfect embrace in your location.

“This was a big learning for us — to bring others in early, who can be big players and amplifiers for your action,” Faith says. 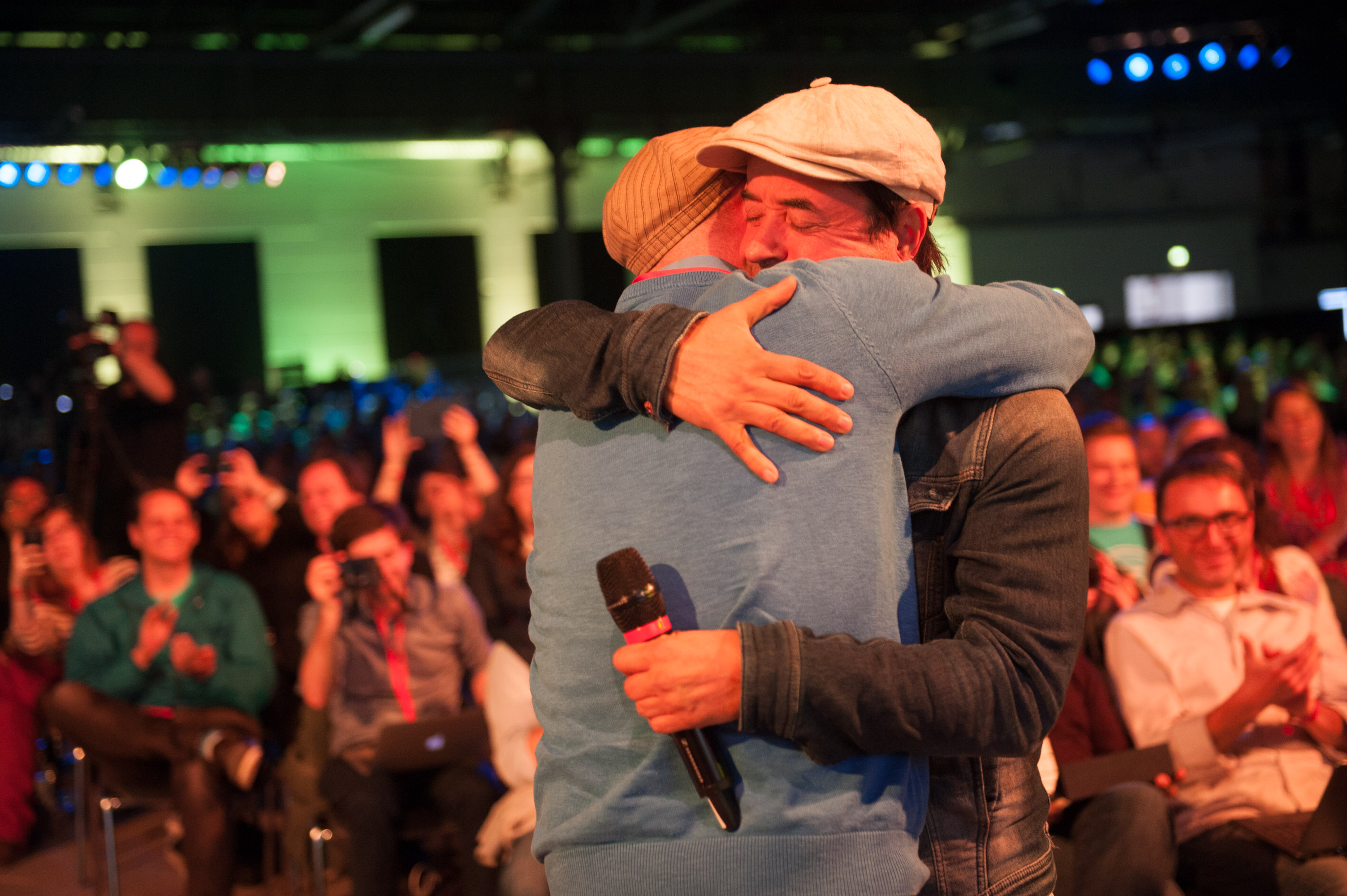 The presentation included a mock demo of Google Hug with participation from a willing audience member (who thought it was real) and a German actor (who was in on it). Photo Credit: Peng Collective / Ruben Neugebauer

It also helped that people trusted Peng! could perform this stunt well. Six months prior, the collective executed its first successful action at one of Shell’s Science Slams, competitions for young students to present ideas that tackle climate change. Pretending to be a student, Peng! presented a car engine that ended up spilling oil all over the stage. The action earned media coverage from nine news outlets including Huffington Post and a video of the spill spread throughout the online world.

In a room full of key media players that Peng! wanted as allies, Faith and Jean (under the pseudonyms Paul von Ribbeck and Gloria Spindle) took the stage during a prime Re:publica time slot on May 6. About 20 minutes into their presentation of products like Google Trust, a data insurance model that compensates people when their data is misused based on how much personal data they share, they paused and asked the cameras to stop rolling. What came next was off the record.

Peng! revealed that the presentation was a parody intended to draw attention to Google privacy issues. The activists were frustrated that Google’s identity management managed to portray the company as “doing no evil” while many privacy concerns lurked in the background.

Rather than break the “boring story” that the presentation was a parody performed by activists (a story that was going to be featured in Germany’s two major papers that day anyway) they asked audience members to play along — to begin tweeting their reactions as though the presentation was real. A member of activist duo Yes Men was also on stage at this point.

The good, the bee and the hugly. #googlenest #rp14

after this #googlenest presentation more concerned than ever about big data #rp14 #google innovations http://t.co/mt5G4PLj1h

#googlenest hit the number one spot trending on Twitter that day. It remained in the top 20 for five hours. Forbes and other international media quickly began calling.

A Google representative, who was in the room during the presentation, approached Faith the next morning at the conference and shared that Google had planned to play along with the parody at first, but that changed. He told them they’d be receiving an e-mail from the trademark department soon.

It became clear that Peng! pushed Google out of its comfort zone. For a brand that manages its identity incredibly well, it was quite a feat for the activists to pull off.

Things got a bit ugly too. Jean says he received a threatening private message on Twitter from a manager at Google, saying this wasn’t going to be the end of it.

“I gave this to the press and then he was even more angry,” Jean says.

“I think they were really not used to people working with them like this.” 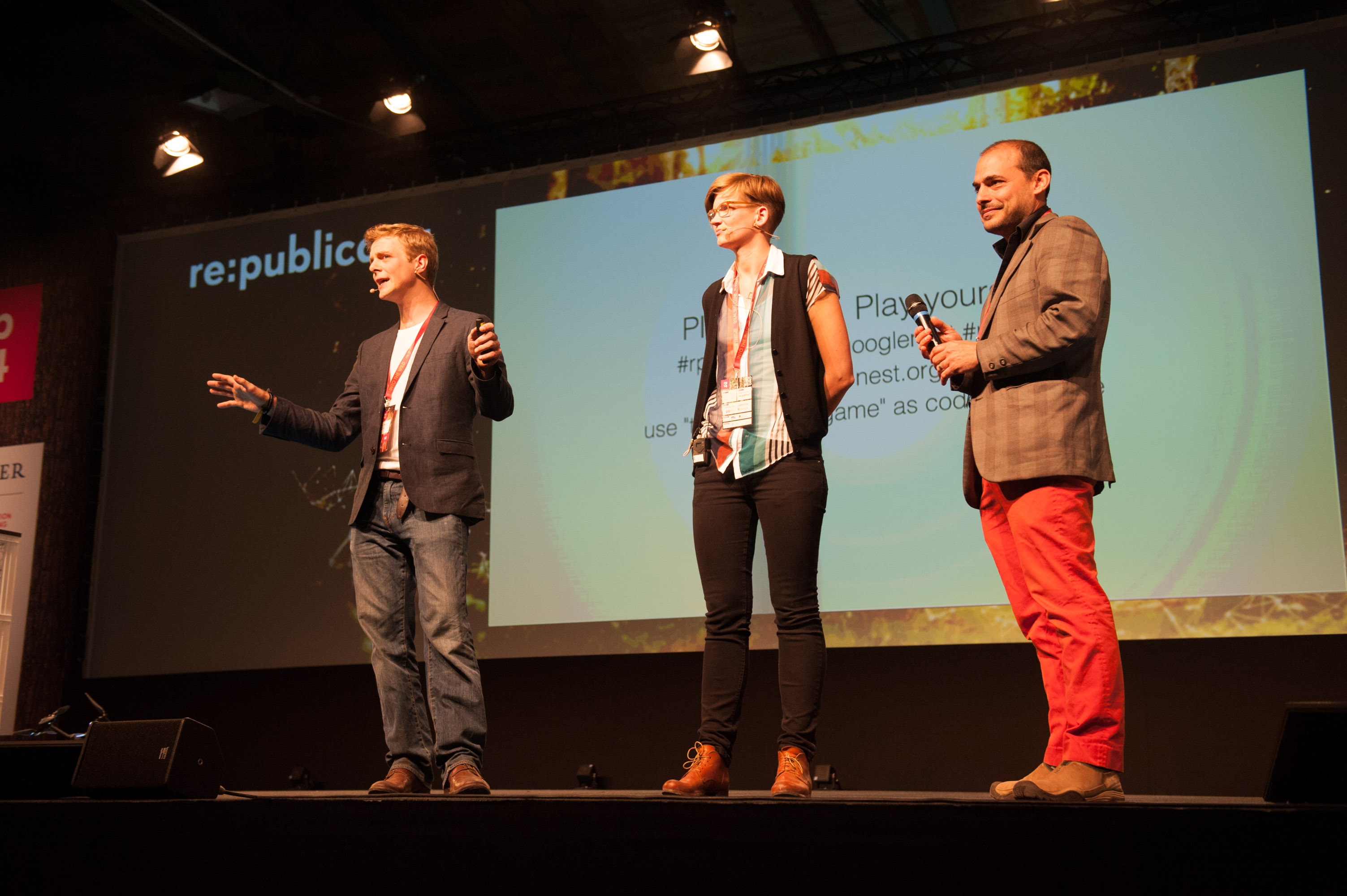 Faith and Jean on stage with Mike Bonanno from Yes Men during the “off camera” portion of their presentation at Re:publica. Photo Credit: Peng Collective / Ruben Neugebauer

The many supporters who rallied around the stunt became pivotal ingredients to its success.

But the openness to dive into participation did not come from NGOs.

“Somehow the NGO scene has structures that make people cowards. Politicians — you can say they just want attention and yes, they want attention, especially during elections. But that makes them so much more courageous,” Jean says.

Peng! recognizes that it’s hard for NGOs to do something that will “piss off Google” and draw politicians in in the way they did. It might alienate funders and supporters. Peng! Collective’s own working business model involves consulting with NGOs (and getting paid for that) — and when it comes to the prankster stuff, they take full ownership.

The Electronic Frontier Foundation (EFF) is one organization that did step up. EFF had Peng!’s back when Google’s trademark team asked the group to take down google-nest.org. They responded to Google on Peng!’s behalf.

“…the site was pure noncommercial political commentary. Trademark owners should not and cannot punish activists simply because they happen to use trademarks in the course of that kind of commentary.” 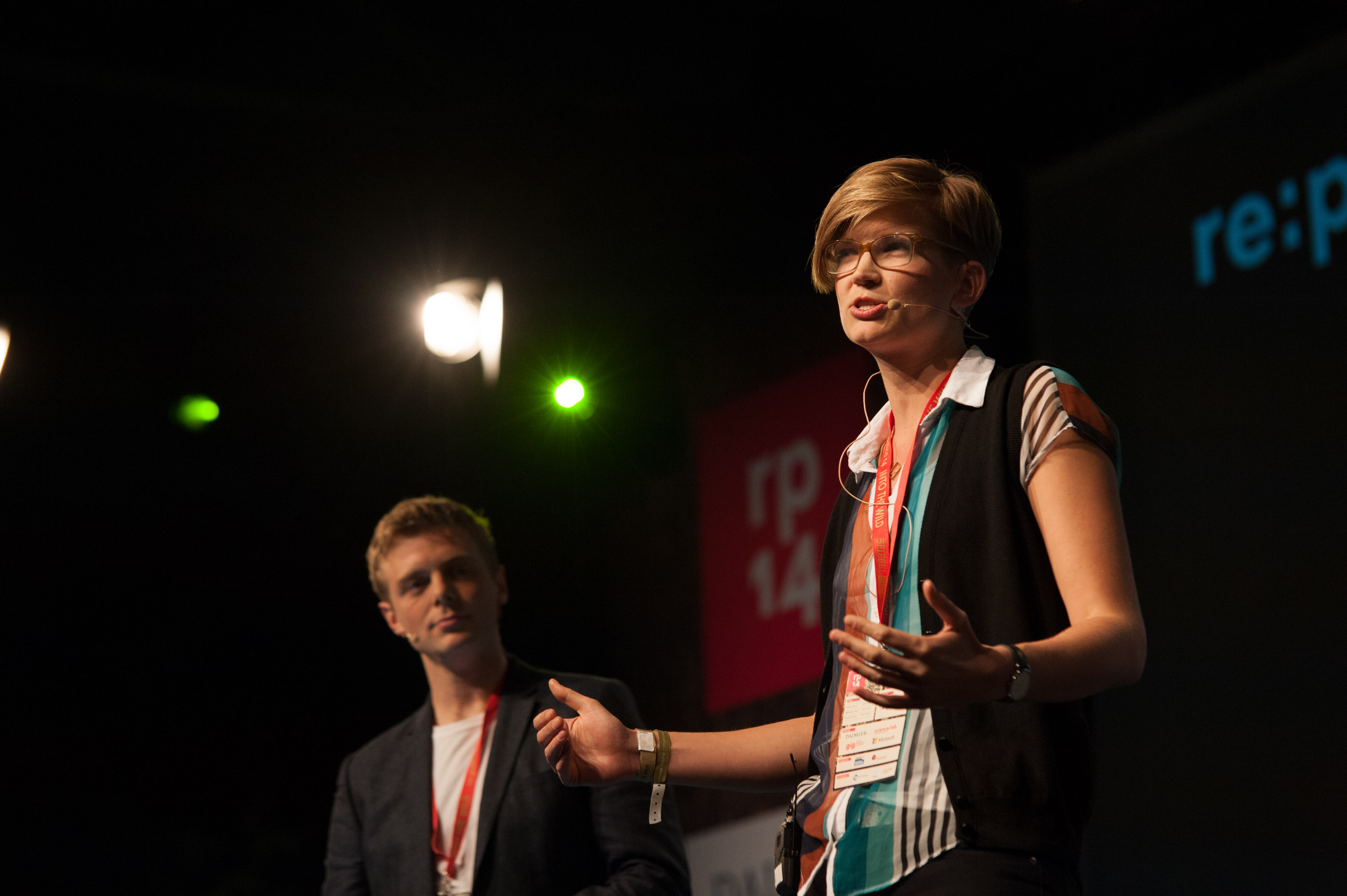 The duo performed a mock presentation as representatives of “Google Nest” under the pseudonyms Gloria and Paul. Photo Credit: Peng Collective / Ruben Neugebauer

Between EFF, lawyers from Mozilla and Wikimedia who also supported Peng! pro bono and a wide network of other supporters, Google eventually wrote to the activist group saying that they considered the matter closed.

This points to another key lesson: know what you can get away with legally and use that to your advantage.

“Let’s learn from our enemies,” Jean explains. “If you look at the economics of corporations, their state of mind is: ‘let’s look at every possible gray area of laws and use them.’ And NGOs just don’t do that.”

Before the matter was closed, Peng! did remove the site’s content, but they kept the domain. Now the site has a note explaining what happened, and links to surviving clone sites that friends and allies mirrored when they thought Google might take the site down. You can find the clones here, here, hereand here.

Jean suggests that having a more cohesive, larger team could have made the work easier and better executed.

“This is basic organizing strategy, but the people on stage shouldn’t be the producers and the text writers and doing everything. It was too much on our shoulders.

“This was definitely a learning point. Your readers will laugh about that,” Jean says.

Still, the creative chaos of Peng!’s project aligned the stars for many elements to fall into place. The Google Glass eyewear Jean sports during the presentation was borrowed from another conference attendee the morning of the presentation.

“I think that’s always going to be the case,” Faith says. While being well organized is always desirable, there’s something to be said for giving a good idea the space it needs to evolve — which isn’t always on schedule. When an idea is too controlled, it may lose the energy that made it so great in the first place.

The grassroots activists received a bit of an “organizing 101” wake up call around how to deal with the media attention they received. They had no press strategy prepared to tell the story of who they were and what they were trying to accomplish.

During interviews with major media outlets like Associated Press, Peng! encountered expectations that they were well-organized digital rights activists, but they’re not. They’re really out to revolutionize tactics in the NGO toolbox.

“I think a lot of organizations working in privacy and surveillance were happy to have a creative action happen. It created a lot of debate and discussion and took these complicated issues and communicated them in an easy to understand way,” Faith says.

“It created an alternative reality to raise these issues in.”

Over 40,000 people visited The Glass Room in London and New York City. Hear how Tactical Tech and Mozilla are using immersive art to inform people about data security and privacy. 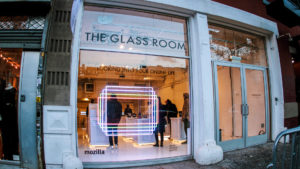 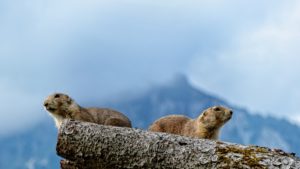