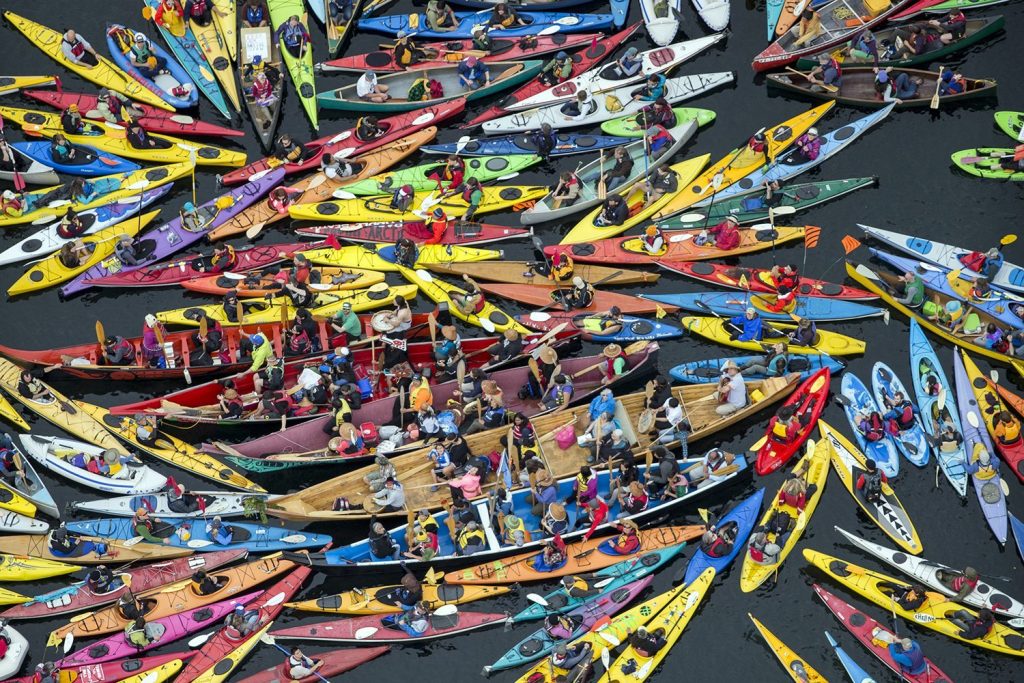 The Polar Pioneer, Shell’s massive drilling rig, was set to leave Seattle for the Chukchi Sea near Alaska in mid-June, 2015. By virtue of being the first rig to drill in the Arctic Ocean, the Polar Pioneer presented a towering symbol of global energy policy headed in the wrong direction.

Sarah Rasmussen and her fellow Arctic and climate campaigners saw the Polar Pioneer’s location as an opportunity to help achieve something very big: Make the decision to permit Arctic drilling into a moral moment for President Obama and his handling of climate change. People from around the region gathered on the ground – and in the water – to protest, raise their voices and draw global attention to Seattle and the Polar Pioneer.

Campaigners and volunteers integrated digital storytelling into planning and strategic choices early on. Activists, volunteers and people new to “campaigning” were encouraged to share their story through online messaging, photos, social networks and video. They also received support to help ensure stories were seen by a wide audience. The campaign team used a combination of training, networking and smart digital tools to create channels for scaling up storytelling across social media and online news platforms.

Seattle has an active climate movement and engaged Native American activists, some of whom Greenpeace has worked with before. In the Spring, area groups shared ideas with one another for using the Polar Pioneer’s presence as a way to continue building the anti-fossil fuel movement in the Pacific Northwest and stop Shell’s Arctic drilling plans. This creative process led to the idea of setting up a floating, people-powered blockade when Shell tried to leave town.

Easy access access to digital cameras, livestreaming platforms and the Internet give direct actions the potential to have global impact. Maximizing this opportunity depends on ensuring that people on the ground can effectively (and quickly) develop and share stories.

“Training the activists you are working with, and getting to know their story, is one of the key parts of doing good mobilization for action,” said Sarah Rasmussen of the Greenpeace US digital team. Activists learned about event logistics and were trained on video, social media storytelling and using hashtags to build a narrative. Participants also received a legal briefing on the use of social media during a nonviolent direct action.

This level of awareness and support was important because the majority of participants were local concerned citizens and volunteers that heard about the event from Greenpeace, other organisations and their personal networks. People would have many opportunities to share their own stories about the impact Arctic drilling and climate change have on their community.

Additional research and support also identified social media channels to focus on and alternate messages for many potential scenarios.

The June 15th kayak action saw activists blocking Shell’s rig from leaving Seattle. The event received impressive media attention, including on Periscope. The scale of news and social media coverage was notable though, despite planning, the action itself lasted only a few hours.

How to Share a Direct Action with the World

Then, a surprise – Shell’s icebreaker had to unexpectedly diverted to Portland for repairs. Research, plans, preparation, and lessons developed in Seattle suddenly became invaluable to further sharing the story of Shell’s arctic drilling.

Twenty-six activists took part in a direct action on Portland’s St. John’s bridge. That group included a member of the Greenpeace online team who supported the activists and ensured that everyone was properly trained in their equipment and social media storytelling. “They made sure everyone was comfortable using the different apps, were very intentional that we use our personal accounts,” said Dan Cannon, one of the activists dangling off the bridge that day.

Portland activists were joined by countless people from local organizations, the community and Greenpeace who supported the action on the ground and on kayaks in the river. Five people, including Cannon, were tasked with capturing and sharing content. “Media and online teams offered talking points ahead of the campaign but we also encouraged activists to speak from the heart,” Rasmussen told us.

Activists received phones loaded with Twitter, Instagram, Tumblr, Dropbox, WeTransfer, Reddit apps, and content templates. Dan Cannon was one of the 13 people hanging from the bridge and in the path of Shell’s icebreaker. Cannon didn’t use prepared content. More personal posts and tweets received more shares and retweets, he found.

As demonstrated at the Seattle and Portland actions, participant-generated photos, video and stories from campaign events are increasingly integrated into blogs, digital and mainstream reporting (and the social media accounts of online news outlets). A New York Times story about the Portland action embedded social media posts and user-generated videos created by Greenpeace, staff and activists.

By thinking about digital storytelling from the start, campaigners were able to help guide the social media narrative seen by supporters on the ground, on social networks and across a broad news media audience.

On September 28th, Shell announced that it would be suspending Arctic drilling for the foreseeable future and pointed to the cost of public opposition as one reason for the decision.

Using digital to get more people engaged in direct actions

Sarah Rasmussen, Nick Young and other global Greenpeace staff working on Save the Arctic met in late-August to talk about a few approaches they have been trying out lately to extend engagement in direct actions.