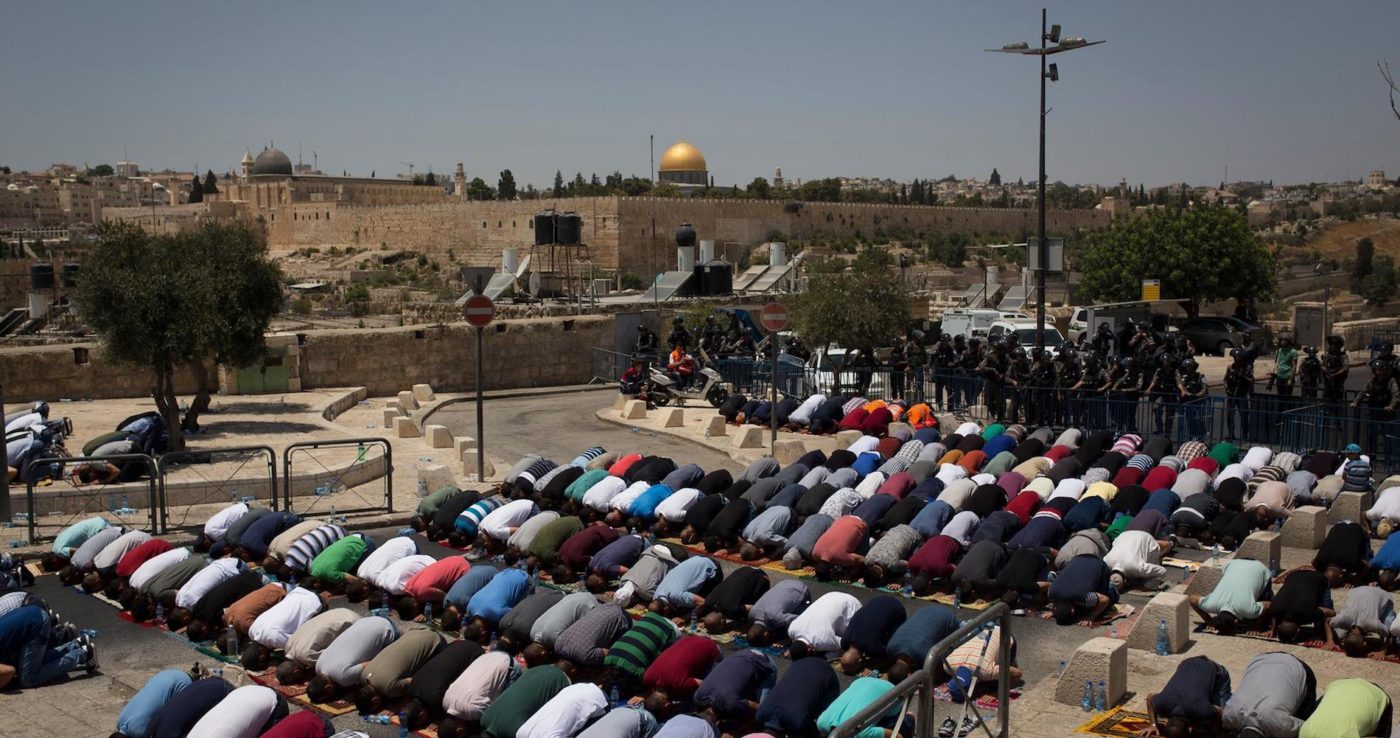 The Palestinian-led protests that took place in East Jerusalem during the second two weeks of July came in response to the Israeli government having imposed a new security measure on Haram al-Sharif (the Noble Sanctuary), the third holiest site of Islam. The demonstrations that followed were characterised by a remarkable display of organised nonviolence.

Previous demonstrations found Palestinians battling Israeli paramilitary and security forces with an ad hoc combination of chanting, stone throwing and the burning of rubber tires. This time they stuck strictly to well-organised, mass non-violent actions. They achieved their goal of forcing the Netanyahu government to remove the metal detectors, but at a high price.

Ofer Zalzberg, the International Crisis Group (ICG)’s senior analyst on Israel and Palestine, explainedthat the demonstrations were organised in a very traditional manner: “The five daily prayers were the anchor,” he wrote in an email to MobLab, “and the decision to close all other mosques on Friday was respected and led to large scale mobilisation.”

According to Zalzberg, the religious authorities in East Jerusalem provided focus for the demonstrations by publishing statements outlining specific political demands of the Israeli authorities. At the mass outdoor prayers held outside the Old City, prayer leaders and religious authorities called upon protestors to refrain from violence. The outdoor prayers were part of a mass boycott of the al Aqsa compound, which Palestinians vowed to maintain until the Israelis removed the metal detectors they had installed at the entrances.

Ahmed Maswadi, a 21 year-old law student at Bir Zeit University and a resident of East Jerusalem, was active in the demonstrations although he is not a practicing Muslim. In a Skype interview with MobLab, Maswadi explained that al Aqsa has significance for all Palestinians, whether Muslim, Christian, religious or secular, and that all had respected the calls from religious authorities to keep the demonstrations non-violent.

“They told us that we should not give the Israeli forces an excuse to use violence against us–against children and old people,” Maswadi explained. He described the religious authorities as the “moderators” and the unifiers of the uprising, but said that the real leaders were the youth of Jerusalem. “We are the ones who were on the front lines,” he said. “Every day.”

Local communities stepped in to prepare and distribute food to protestors, and to clean up. Activists reported events on the ground by sharing amateur videos recorded at various demonstrations, but activists did not use social media to organise the protests.

Despite the resolutely nonviolent nature of the demonstrations, at least three Palestinians died of bullet wounds while dozens of injured were taken to hospitals.

Several analysts have described Netanyahu’s capitulation as a significant victory, and as evidence that Palestinians have given birth to a new grassroots, nonviolent resistance movement.

But there are many caveats to be aware of here, and all of them emanate from the unique, global significance of the al Aqsa mosque compound. This sliver of territory inside Jerusalem’s Old City, which Muslims believe is the place from which the Prophet Mohammed rose to heaven, is the only issue with the power not only to animate and unify the deeply divided Arab world, but also to anger and arouse the much larger non-Arab Muslim world–including Muslim-majority countries that are friendly to Israel. Ensuing events showed that by upsetting the status quo at al Aqsa, Israel invited serious diplomatic and political consequences.

Jordan and Turkey—both Muslim-majority countries that have diplomatic relations with Israel—saw significant anti-Israel demonstrations in the wake of the East Jerusalem protests. In Istanbul, demonstrators attacked a synagogue; and in Amman, an Israeli embassy guard shot and killed two people, enraging Jordanians. Meanwhile, the usually quiescent Arab League publicly warned Netanyahu that he was “playing with fire,” which was also a tacit reminder that Israel stood to lose its convenient, backroom relationship with the Arab Gulf countries.

In other words, Netanyahu reversed his decision on the metal detectors not because he was moved by the sight of unarmed Palestinians demonstrating, but because the Arab and Muslim worlds were united in communicating to him the consequences of keeping those metal detectors in place.

This unusual solidarity from the outside world goes a long way toward explaining the self-discipline and motivation of the protestors in East Jerusalem.

The question is whether Palestinians, who are struggling with deep internal divisions, would be able to maintain that united non-violent front against Israeli security forces in situations not involving al Aqsa. These days Palestine is no longer the main animating issue in the Middle East; the attention of the Arab world is focused on the situation in Syria, in Iraq and in Yemen. Meanwhile, interest in Palestine outside the Middle East has largely fallen away.

The dominant discourse in Israel is hawkish, with about 77 percent of Israelis disapproving of Netanyahu’s having agreed to remove the metal detectors. The prime minister is also feeling pressurefrom within his coalition to retaliate against the Palestinians. It is thus quite likely that Israel’s next actions in East Jerusalem will test the durability of this new Palestinian non-violent grassroots movement.