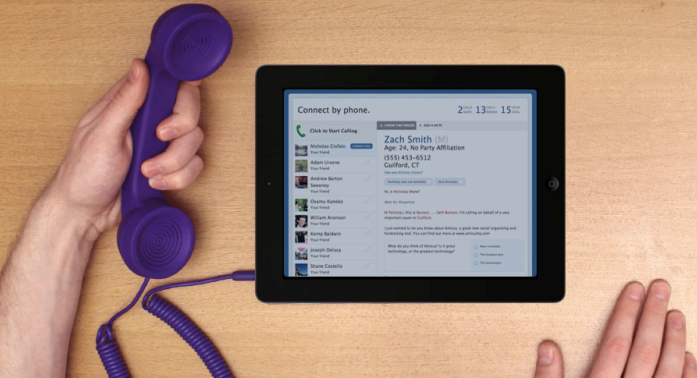 Amicus co-founder and CEO Seth Bannon has been involved in political volunteering for years, but one thing has always frustrated him — the “crappy tech” that quite often is wasting volunteers’ time.

Despite new and continually evolving rich social data available on Facebook, campaigns still mostly involve a stranger calling a stranger, and likely when they’re in the middle of dinner.

But in all challenges lie opportunity, which prompted Seth to set about fixing the volunteer tech dilemma. A year and a half ago, he along with co-founders Ben Lamothe and Topper Bowers launched a new tool called Amicus, which invites volunteers to campaign directly to their social networks.

“The aim of Amicus is to take data from Facebook and make it so that tried and true methods of outreach and fundraising can be friend to friend,” explains Seth.

Volunteers can log in to the organization’s campaign using Facebook. The tool will match their friends’ social graph to the campaign’s target list, for example women in Connecticut.  Volunteers then have the option to call, print personalized postcards, or e-mail their friends.

Seth says the calls have seen the highest uptake, with nearly 75 per cent of volunteers using the platform to call friends. It’s also one of the most effective forms of contact.

“Someone you know, or someone in your network talking to you live and asking you to support a cause is a very powerful ask, both because it’s very personal and they can hear your concerns and respond to them, but there’s also a lot of social pressure involved if it’s a friend,” says Seth.

The novelty of the postcard comes second with 20 per cent of Amicus users choosing to print a personalized postcard to mail to their friends.

Game elements are also built in for volunteers, who can rack up points to score digital badges for the number of calls made, which are shareable on Facebook. 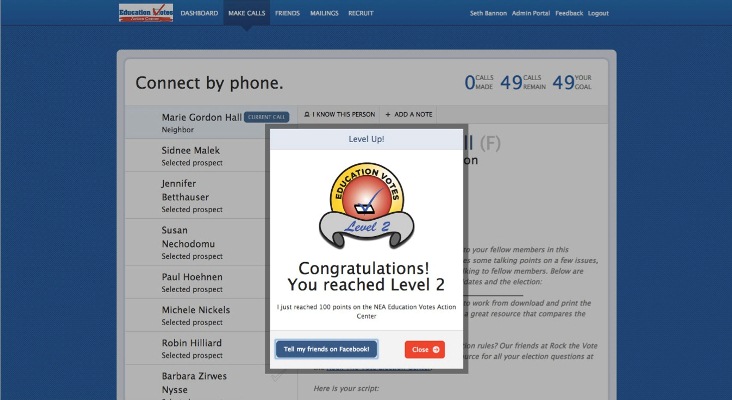 Amicus is used by national trade union center AFL-CIO ( American Federation of Labor and Congress of Industrial Organizations) and the National Education Association. It was most recently successfully adopted by the Human Rights Campaign (HRC) for its Call4Equality.

He adds HRC is also well aware of studies that show it’s the friend-to-friend contact that can convince potential voters on a range of issues.

When it came time for HRC to ramp up its efforts for the marriage equality referendums happening during the 2012 U.S. election in Maine, Maryland, Washington and Minnesota, they adopted the Amicus tool wholeheartedly.

HRC created the Call4Equality campaign (Amicus allows campaigns to create customs designs or a visual extension of an organization’s website), and pushed out the networked campaign in a series of eight e-mails to their 1.5 million members.

According to James, the tool’s attractiveness stemmed from its ability to mobilize volunteers who are not in Maine, Maryland, Washington or Minnesota to get involved without having to travel or make financial contributions. They could simply call their friends in those key states to make them aware of the referendum and ask them to support marriage equality.

“This tool really allowed us to strategically target certain groups that we found in our internal polling and our campaign polling that we knew we needed to convince,” James tells Mob Lab.

“This tool allowed us to be really strategic and to make more calls, and we could do this instantly with the call for Call4Equality tool.” (The Facebook app is still live for people wanting to see how the tool works)

If people were in support of marriage equality, volunteers would ask if they’d be interested in volunteering, which James says resulted in a number of new supporters.

“Every week we sent dozens of names who opted into direct volunteering as a result of our Call4Equaltiy calls.”

HRC also built on the gaming effects offered by Amicus, creating custom badges for volunteers with the campaign’s name — a best practice according to Seth — and offering physical prizes, like sending out T-shirts to people who continue supporting  Call4Equality.

HRC would also acknowledge its top volunteers, which Seth says is a great way to inspire volunteers to keep working.

In total, 3,000 people signed up to use Call4Equality, with about 300 supporters becoming active and engaged callers. 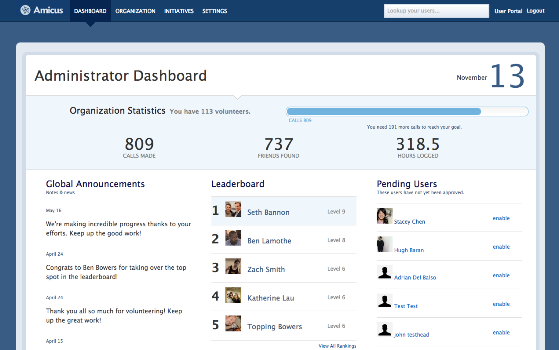 The admin dashboard for organizations to track volunteers.

While James says the Call4Equality wasn’t “barn-busting” in terms of numbers, it helped HRC connect and build strong relationships with about one per cent of its core activist group, which they can now call on when they need direct assistance.

“Most of our users would reply back (to the survey) and say, ‘I’m so impressed by this tool, this really makes it easy for me to get involved in these campaigns when I otherwise wouldn’t,’” James says.

Some other comments provided by respondents included:  ‘It’s been an excellent system for calling during these last crucial days,’ and ‘Like many others, I have limited time but this made it easy and now I try to divide my time between calling for Obama and calling for HRC.’

Marriage equality was passed in all four of states voting on the issue, breaking a run of 32 consecutive losses in statewide votes on same-sex marriage.

“The majority of Americans do support marriage equality, so for us, our goal was to get people to engage with potential voters and get them to vote for marriage equality and show up,” says James. “In that sense, this really did succeed.”

Currently, about 20 per cent of people who register to use Amicus end up not taking action – a question that is continually vexing the company to reconfigure its interface based on user feedback.

Seth says the tool’s goal is to mimic the information and support provided in a well-run volunteer office.

The company plans to add new features including a community layer to mimic the feeling of working in an office surrounded by other volunteers  — for example, a feed showing what other volunteers are doing. If someone gets hung up on multiple times, Amicus envisions a prompt to their volunteers to send their support through a virtual high-five.

“It gives you a sense that progress is being made, and you’re part of a group striving towards a goal,” says Seth.

While Amicus is currently being used by savvy nonprofits, Seth says the long-term goal is to make the tool so user-friendly that anyone starting off with a cause will be able to use it and organize for their issue.

Amicus is also exploring how to vigorously test its tool to demonstrate the power of social campaigning. Seth says they’re partnering with the Analyst Institute, which assists organizations in evidence-based testing for their voter contact efforts.

Seth adds a beta organization using Amicus recently ran a split test, with one group using the social networking campaign tool and the other relying on traditional organizing outreach tactics. Seth says the social campaign proved to be twice as effective.

Amicus is only available in the United States, and costs vary on the geographic region and number of users.

Petition delivery with iPad shows new signatures as they happen 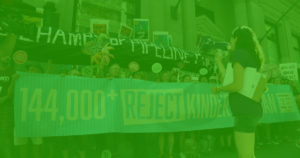