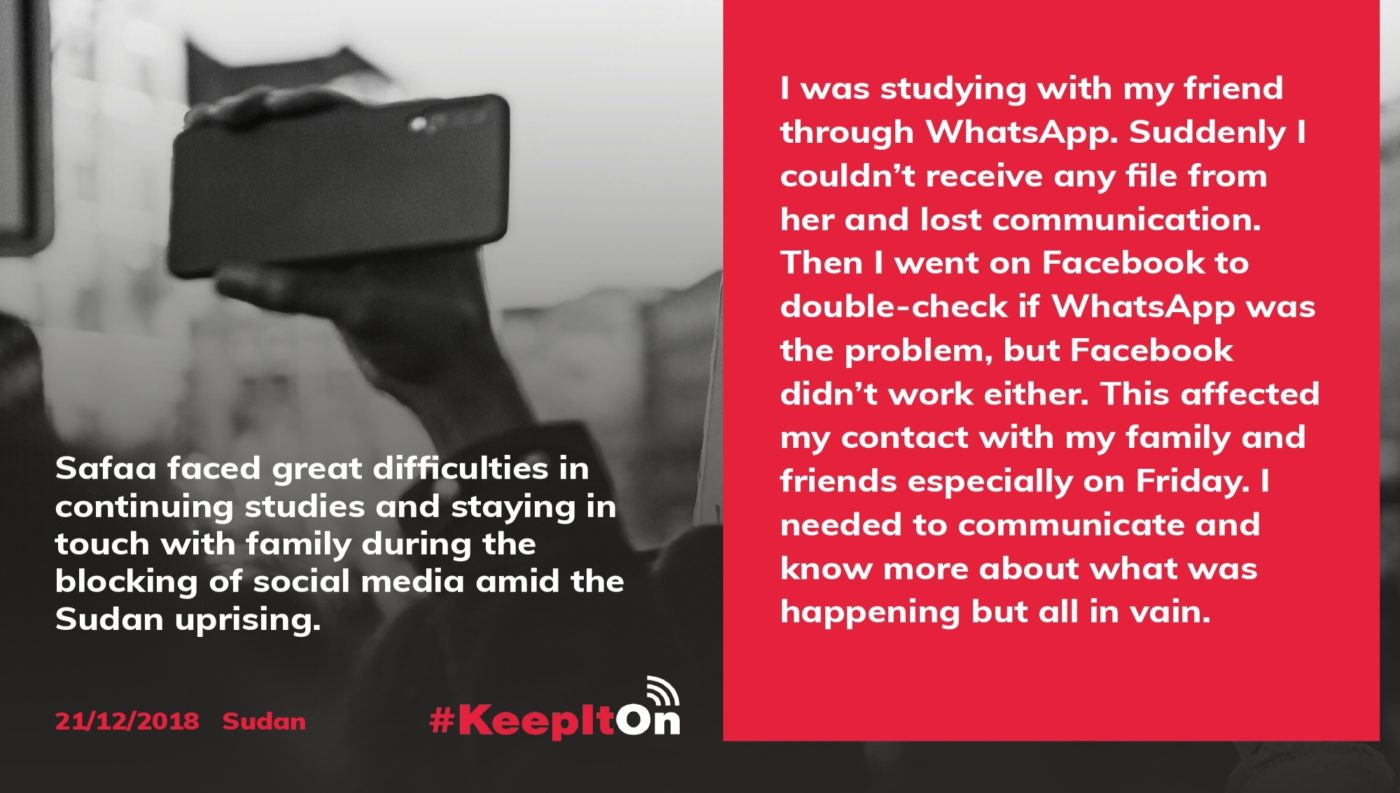 When the #KeepItOn campaign team received a photo of a dirt track from a citizen affected by an internet shutdown, they were puzzled.

“We were saying ‘why (did) this person send us this photo? It doesn’t make any sense’,” says Melody Patry, advocacy director at Access Now, the digital rights nonprofit that has convened the campaign with 141 organizations from 59 countries.

It eventually emerged that the sender had no internet where they were, forcing them to trek on foot and then get the bus to the border of another country in order to receive an internet signal.

Internet shutdowns are occurring with increasing frequency around the world. According to data from the Shutdown Tracker Optimization Project (STOP) created by Access Now, there were 188 in 2018, compared to just 75 in 2016.

When those in power decide to pull the plug, they are interfering with people’s fundamental rights and dealing a serious blow to the economy. But these are far from the only consequences, and talk of rights and economics can feel intangible. How do people experience “blackouts” on a personal level?

That’s what the #KeepItOn campaign’s Shutdown Stories aims to capture.

The project is an example of not only how to tell compelling stories around an issue, but also how a campaign can jump on opportunities to incorporate broader and meaningful participation — even when already underway.

It also highlights the importance of nourishing a campaign with a variety of perspectives to achieve better outcomes.

“We were (highlighting) a lot the freedom of expression angle, the economic impact angle, but sometimes for people it was difficult to actually just see what (shutdowns) look like for people affected in their daily lives,” says Patry.

#KeepitOn, unveiled at the 2016 RightsCon gathering, didn’t start out having a structured way for people to contribute their stories of how they live the ramifications of losing connectivity.

The campaign did, however, have a mechanism for people to report when disruptions happen, as part of a larger effort centred on investigating shutdowns, pressuring internet service providers to push back against shutdown requests, and building consensus in international governance spaces that people have a basic right to access information and speak freely online.

An internet shutdown is defined by experts as “an intentional disruption of internet or electronic communications, rendering them inaccessible or effectively unusable, for a specific population or within a location, often to exert control over the flow of information”.

When it comes to blackouts, Asia is the most impacted region. India alone accounts for the world’s majority: there were over 300 documented shutdowns over six years, according to the Software Freedom Law Center tracker.

The next affected area is Africa. In March 2019, Chad marked one of the continent’s longest ever shutdowns, with a blackout reaching 365 days. Meanwhile in the Anglophone parts of Cameroon, the internet was cut for 230 days between January 2017 and March 2018, according to Access Now. The month of June 2019 also saw disruptions to connectivity in Algeria, Ethiopia, Liberia and Sudan.

The project is now gathering testimonies to better inform their campaign and goals, as well as to better support those affected by blackouts.

They collect them through an online form but also receive accounts via email, Twitter and Facebook. Stories are told in many languages including French, English, Spanish, Arabic, Hindi and Urdu. Often people include their contact details. If they do, Access Now may follow up their story.

Overall, the campaign has seen that people are very willing to share their stories when provided with the opportunity, although less so if they’re living in contexts where retaliation from authorities is a major fear.

Patry says they have received a lot of photos.

“People are very creative and it’s interesting because for us it’s the first look into how they interpret the impact of the shutdown,” she says.

“Some people send us photos of the street, especially when an internet shutdown happens during a protest or elections, as (an) alternative of what they would have posted on social media.”

The perspectives they receive have shed light on the perhaps less obvious consequences of disrupted internet access, such as young people’s ability to study. One area of life impacted by blackouts which Access Now hadn’t realised the magnitude of is health.

“We collected so many stories of people who were telling us ‘I needed medical help. I wasn’t able to contact my doctor because of the shutdown’,” says Patry.

Health practitioners who use the internet to update their supply chain of medicines that need to be dispatched to remote areas have also reported being affected.

Internet shutdowns are having a horrific consequences for women and girls in particular, says Patry.

“We got a few stories on pregnant women who were looking for information and not able to get it with some really sad – sad is an understatement – really devastating effects for their baby,” she says.

And a blackout can cut off critical lines of communication for family and friends to find their missing loved ones during moments of unrest.

“They think that people are mobilising using social media and that’s the reason why they cut access to social media for example,” says Patry.

“But some other governments I think genuinely believe that cutting the internet can sometimes be a solution.” For example, there have been instances where some countries have decided to disrupt connectivity because they want to prevent cheating during school exams.

All this underlines the importance of understanding the particular circumstances in which a blackout is occurring and the real and varied ways it affects people’s lives, if campaigners want to make progress towards a lasting solution.

Since the #KeepItOn launch, there have been some promising victories, including resolutions from the United Nations Human Rights Council and African Commission on Human and Peoples’ Rights (ACHPR) condemning blackouts.

But there is more to be done, Patry says, including working with internet service providers, social media companies, tech companies, local start-ups and civil society.

And, surely, there are many more shutdown stories to listen to and learn from.

Check out the #KeepItOn website to see how you can get involved in the campaign.

Top photo: “Safaa faced great difficulties in continuing studies and staying in touch with family during the blocking of social media amid the Sudan uprising.” Credit: Access Now. Used with permission.

Amy Fallon has reported from Africa, Asia, the UK, Australia, and Canada for a wide variety of media outlets and done communications and media consultancy work for organisations such as CIVICUS.

How Namati and other organisations equipped a community to win back their land from an international palm oil company. 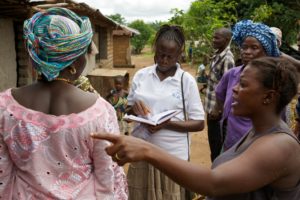