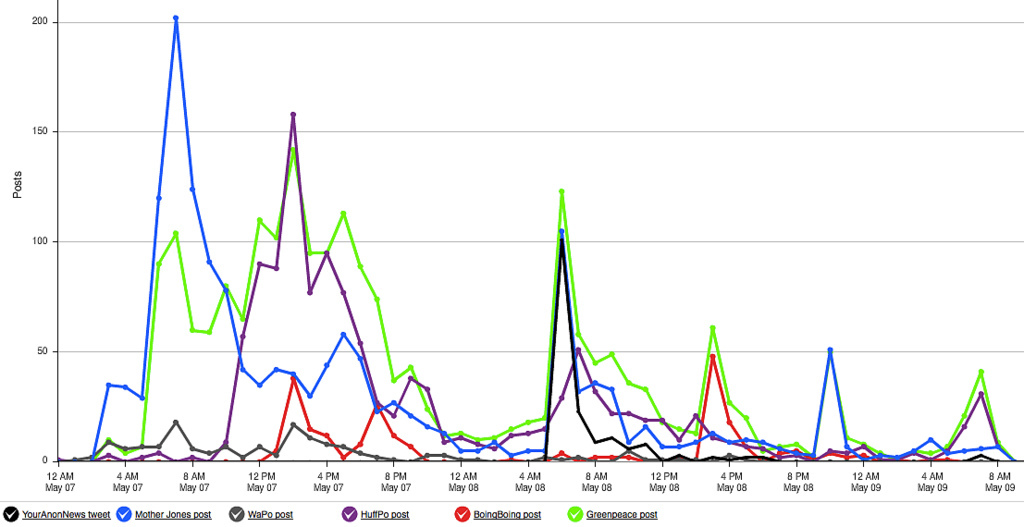 Advocacy campaigns play out in large part on blogs and social networks. Each blog or news site has an audience. Each person on Facebook and Twitter (including bloggers, reporters, and campaigners themselves) has an audience.

A goal of most any advocacy campaign is to ensure that at least one key audience sees a message. And in most cases we seek to maximize the number of people that see a message by pushing a story’s reach more broadly across an audience or having the story jump into different networks.

One way messages can jump networks is for audience members to interact with a message, usually by sharing it with their social media network.

Another way to jump networks is to have multiple outlets for a message, each with a different network.

Most campaigners are trying to understand how messages spread and how to make sharing happen. Common questions include:

These are some of the questions that the Mobilisation Lab, Upwell and others are actively trying to answer. 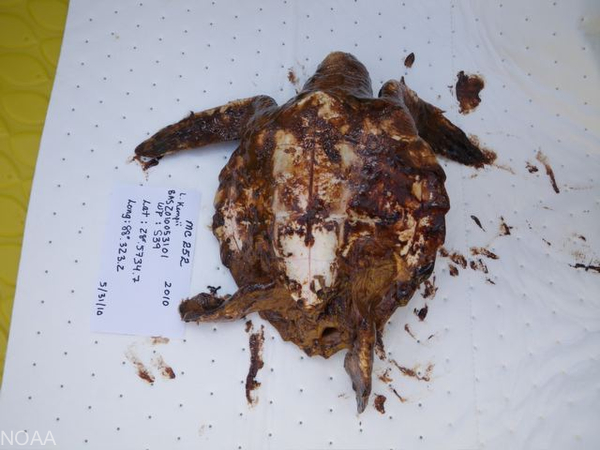 Recently, Upwell shared its extensive tracking of a Greenpeace story about the release of US government photos and files from the 2010 Gulf of Mexico oil spill. We spoke with Upwell to find out more about how it tracked the story and what can be learned. We also heard about Upwell’s use of “minimum viable campaigns” to help learn how and what stories move across networks.

On May 7, 2012, Greenpeace posted a story about files and images received from the US government nearly two years after filing a Freedom of Information Act request.

The post asked people to sign a petition demanding that the White House publicly release all images and files related to the Gulf disaster.

Greenpeace also asked 400,000 email subscribers to take action. According to Ben Kroetz, Senior Online Strategist at Greenpeace USA, the email was one of the best-performing of the year and over 3% of those taking action were new to the organization, a high growth rate. The campaign generated 53,000 letters of support.

Several stories appeared quickly on May 7th, including pieces in the The Washington Post, Mother Jones and Huffington Post. 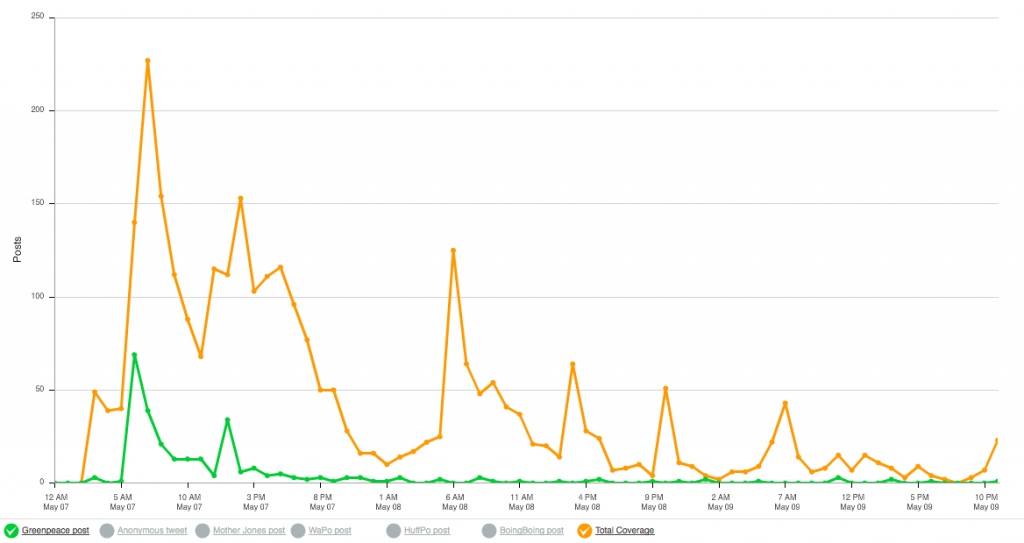 A chart prepared by Upwell that tracks mentions of the Greenpeace post (green) and total story mentions (orange).

Upwell looked for mentions of these first news articles on social networks. Hourly mentions and links on Twitter and the blogosphere are shown in the graph below. The graph also includes tracking of the original Greenpeace post (in green) and a story on BoingBoing later on May 7th (in red below). The black line tracks a post by the activist group Anonymous via the Twitter account @YourAnonNews. 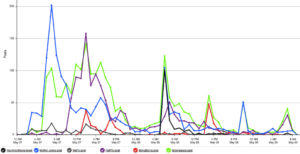 A larger view of Upwell’s story tracking chart from May 7 to May 9.

Upwell’s Aaron Muszalski and Rachel Weidinger provided us with thoughts about a few takeaways from this early reporting and related social sharing that helped amplify the story:

Campaigners often choose to save time by focusing on a single news outlet with a large social media following. One hypothesis drawn from this data (but still in need of direct testing) is that different news outlets and blogs have different audiences. If these somewhat similar news outlets all had similar audiences one might expect follow-up posts from different outlets to NOT create new spikes in mentions. New stories did create new spikes, however, indicating that audiences don’t overlap much. This could use further testing.

Upwell shared much of its work and findings on this project using Storify. The image below is a screen shot of the Storify page. We recommend you check out the full page and their analysis, too. 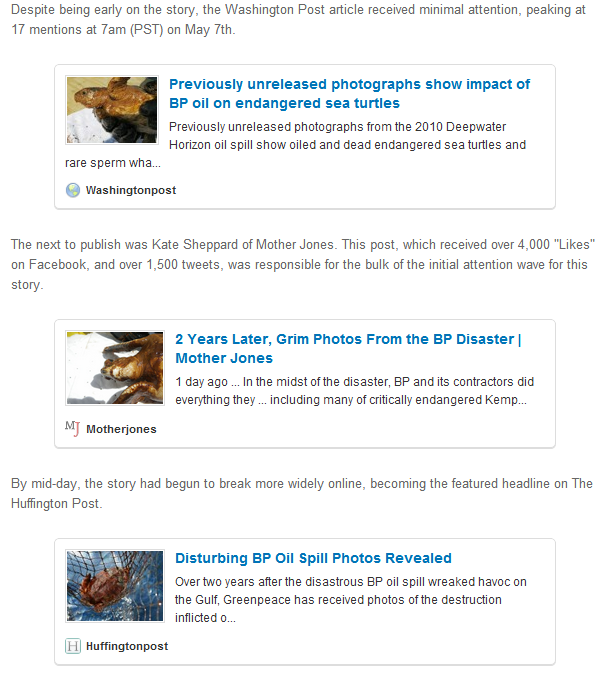 It’s important to track audience reactions to better understand audience relationships. Do Huffington Post and Mother Jones have the same readers, thereby making it unnecessary to reach out to both?

By tracking this story, Upwell has added valuable testing data to the campaigner’s toolbox. In this case, different news sources had different audiences. It is important to reach out to and engage multiple news outlets and not rely on a single story or blogger to get the word out. Continued tweeting from one (preferably more) account helps get the word out, draw attention from other news sources and keep a story alive. 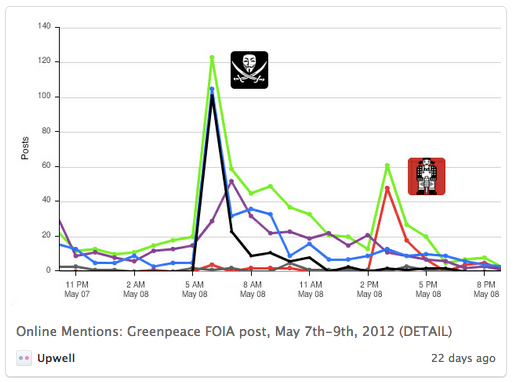 This particular tracking experiment does not tell us, however, that Mother Jones is more or less influential than other sources. It also doesn’t necessarily tell us that the The Washington Post isn’t a useful place to get a story. But the data does indicate that in this social network world a story that isn’t supported through Twitter and other networks isn’t going to get much attention.

It is also unclear in this specific campaign if or how extensive coverage drove attention to/participation in the Greenpeace call to action (asking the Obama administration to release all documents related to the BP disaster). Response to the action was stronger than usual but the Greenpeace campaign team hasn’t yet had opportunity to review action source codes. We will update the story when possible. Clearly tying media and social mentions to campaign goals is critical.

This level of tracking and reporting is helpful to campaigners and organizational leadership in understanding how messages move and the resources needed to make it happen. In the case of Upwell, it may even be helpful to create quick but meaningful campaigns as well as piggy-back on the efforts of partners (as they did here). This is all done to learn and share more about campaigning in networks. 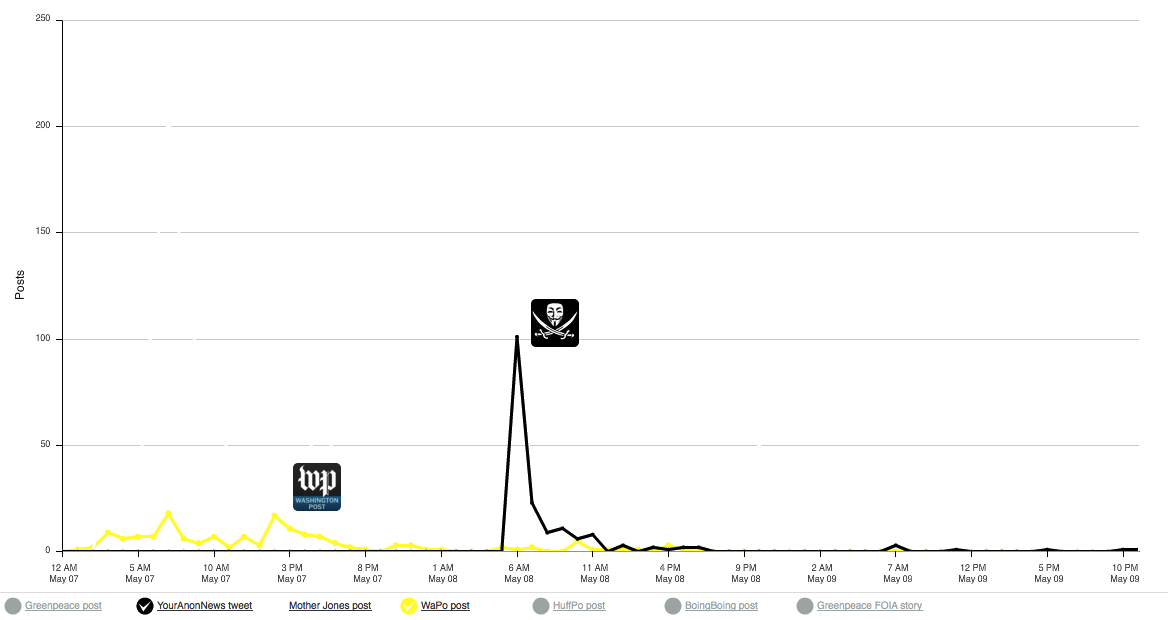 A primary goal of Upwell is to increase coverage of and conversation about the ocean (a marketing and PR agency for the ocean). In particular, Upwell is working to increase social network mentions of the ocean.

Upwell uses a method that it calls “minimum viable campaigns” to help generate data and lessons quickly. Essentially, the team asks what it and/or the ocean community needs to know more about networks and communications. It then establishes a discrete and testable hypothesis and creates a quick, low resource campaign that can create trackable social network messaging.

This also fits the fast-paced nature of social media and news coverage. Complex, multi-party campaigns with goals and strategies that demand months or years of execution are often outdated before they even start. A quick, iterative approach lets Upwell work with the news cycle.

We welcome you to share your experience with media and social data tracking, especially as it relates to mobilisation campaigns.