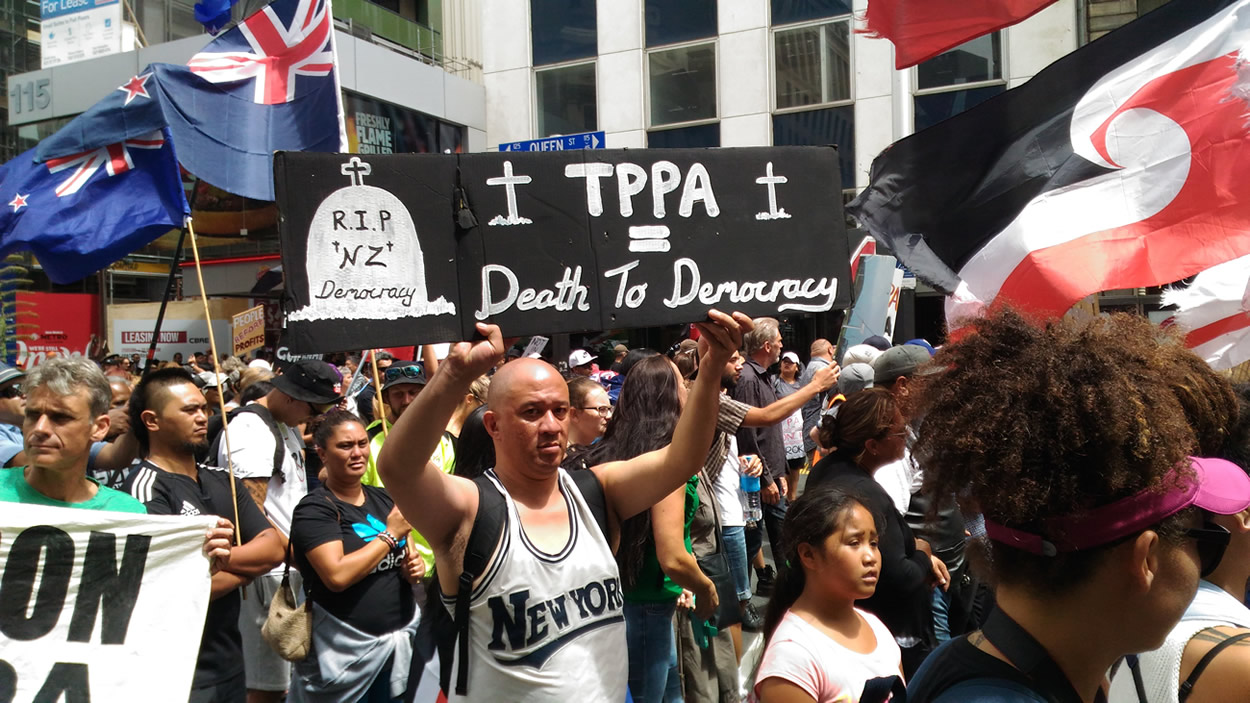 “When the stakes are high, the need for courage is critically important. In this battle, we will need a billion acts of courage to win.”
– Kumi Naidoo, former Executive Director of Greenpeace International

On 4 February, 2016, over 5,000 people took to the streets of Auckland, New Zealand, in a direct action protesting the government’s signing of the Trans Pacific Partnership Agreement (TPPA). Marchers blockaded Sky City, shut down intersections and crowded motorway off-ramps.

Jeff Harrison of Greenpeace New Zealand told us that organisers expected a few hundred people. Higher than expected turnout in the face of a large police presence – 7% of the nation’s police were there – could have led the direct action to become a chaotic, possibly violent, event that set back the anti-TPPA campaign.

Yet the action remained peaceful. Media coverage remained positive and public interest in TPPA continues to grow. Today, more New Zealanders are leading their own actions against the global trade agreement. Another action is planned for March 21at an annual petroleum producers conference.

Organisers like Harrison and collaborators at Real Choice see these actions as critical to the climate justice movement and important tests of Greenpeace’s shift towards networked and open nonviolent direct action (NVDA). 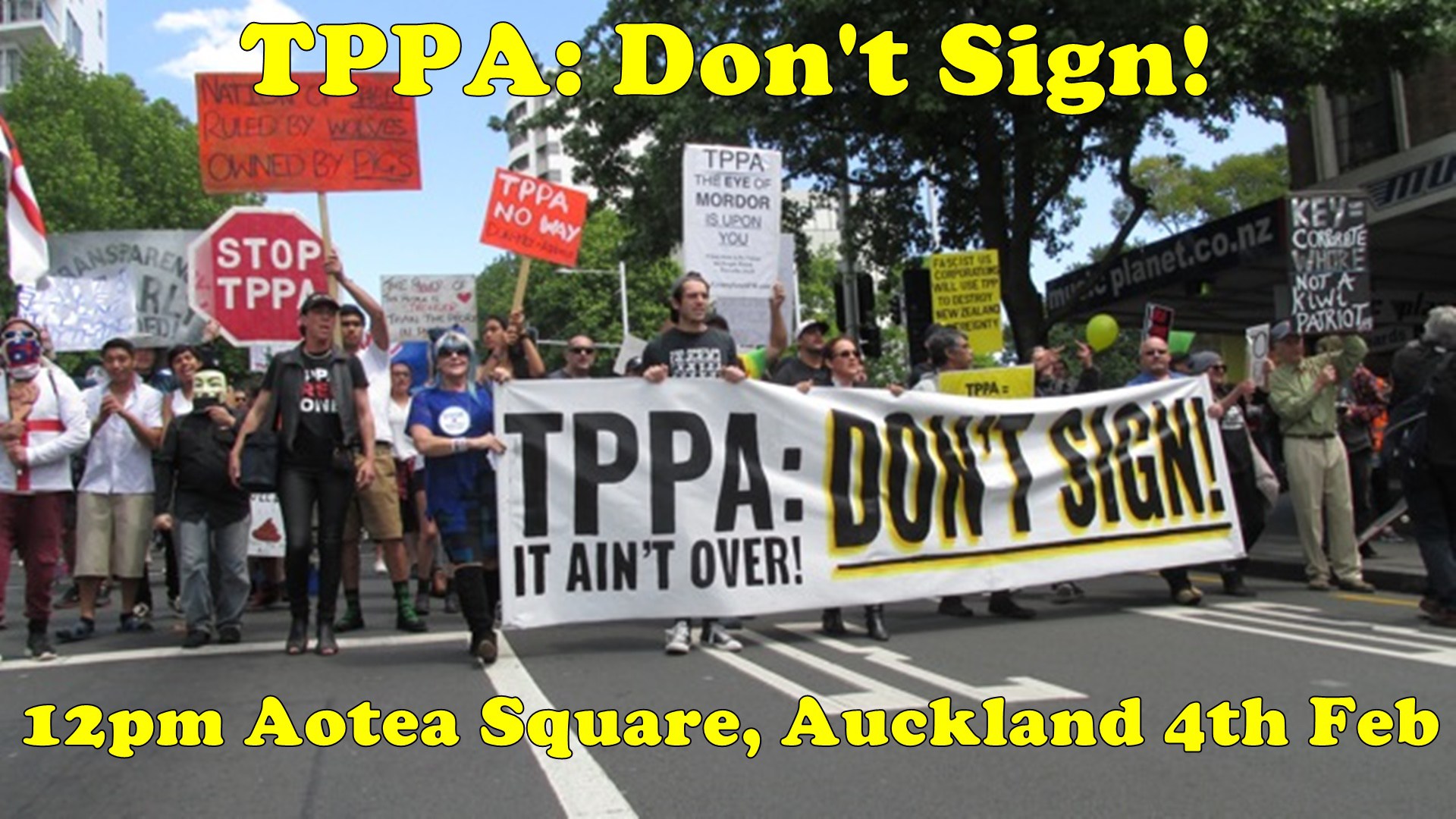 Pacific Rim trade ministers meeting in Auckland on 4 February were greeted with large anti-TPPA protests. Participants were encouraged to “Maintain the kaupapa, keeping respect and aroha at the forefront of your actions.”

In 2014, Kumi Naidoo, then head of Greenpeace International, issued a call for a billion acts of courage. The problems facing the globe, from climate change to food security to income inequality, are too great, Naidoo said, for any one person, group or movement to solve. Greenpeace and others must do more than advocate. Direct support, tools, training and space – both physical and online – are needed to help people become leaders in protecting the planet. 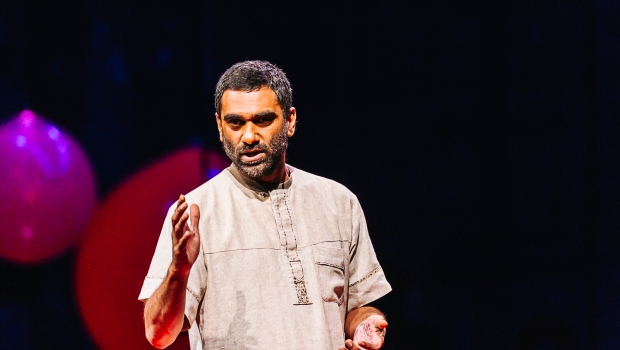 umi Naidoo, former Executive Director of Greenpeace International, speaking at TedX Amsterdam about a Billion Acts of Courage. Click to read more and watch the talk.

Scaling up direct action poses a complex challenge to Greenpeace. The organisation is already redefining how to create people power—an effort in which the Mobilisation Lab plays a role—and has a history full of memorable actions.

But direct action at Greenpeace is typically run by highly controlled and small teams. Actions rely on experience and secrecy to protect participant safety, prevent interference and maximize impact. A “billion acts of courage” envisioned something completely different.

Greenpeace set out to change how direct actions were conceived and implemented. “We continue doing these well rehearsed actions,” Fabien Rondal from the Actions & Investigations Unit at Greenpeace International told us, “but that doesn’t make NVDA accessible to everyone.” Turning the vision into reality, Rondal said, “means changing the way we work.”

Jeff Harrison, data strategist at Greenpeace New Zealand, has participated in and run direct actions around the world. Harrison also studies network theory and how activists, leaders, organisations and people interact. In 2015, he collaborated with co-founder Nico Woodward and others in the Real Choice network to begin testing “opening up” direct action planning to the media, public and even opponents.

“If your strategy is good enough you can let everyone know what it is because nobody will be able to stop you,” Harrison told MobLab. Harrison and others have been mixing open campaigning and networked organizing to create highly exposed but, ultimately, stronger actions with the potential to engage many more people than traditional direct actions.

“If your strategy is good enough you can let everyone know what it is because nobody will be able to stop you.”
–Jeff Harrison, Greenpeace New Zealand

Opening up direct action planning gives people opportunities to initiate and carry out events they care about. Ultimately, campaign strategy is strengthened by knowledge, Harrison says. Sure, not everything will work. “We have run nine actions since last June. Only two have been big but we look at all of them as successful tests,” said Harrison. “If you keep organizing actions that way [in the open] you see what people want.”

Lifting the secrecy surrounding direct action can increase efficiency. When people know what you’ll be doing they have a chance to learn and talk about ahead of time. “The stated goal matters less than the announcements, noise and number of people that hear about it,” said Rondal. Media (and the public) have time before, during and after the event to talk about issues rather than the process of the action itself.

What does an “open” nonviolent direct action look like?

There is no definition or set of rules for running or even describing an open action. But an open NVDA will have at least some of the open campaigning characteristics participants described at Open Campaign Camp in 2015:

Opening Up to Attention and Impact

Direct actions have always attracted attention, especially in the digital age. People share and comment on Facebook photos of people hanging banners on buildings or climbing an oil rig in the Atlantic. But an open and networked direct action has the potential to put thousands of people in the center of the action. People with smartphone apps and cameras can share real-time messages, photos and live video.

Last year’s Paddle in Seattle and a follow-up action in Portland, Oregon, were put coordinated by a mix of organisations, activists and other people. They were intended to create space for anyone to participate in hopes that open access would bring new voices to the call to stop Shell’s arctic drilling plans, grow a network of engaged people and amplify coverage on social networks and media channels.

These direct actions in the US Pacific Northwest remained nonviolent, were even family friendly, and live coverage generated by participants helped place real-time global attention on Shell and arctic drilling. A New York Times story about the Portland action embedded social media posts and user-generated videos created by Greenpeace, staff and activists.

Opening up an action may also help place public attention more directly on the issue (e.g. TPPA or Shell’s arctic drilling) instead of tactics or the group behind the action.

Peter W, who helped coordinate the February TPPA action in Auckland examined Google search data on and around the day of the action and found that public awareness and interest in TPPA spiked. Peter notes that “starting during the protest and extending into the long weekend following, TPPA was one of the most searched for terms in all of New Zealand.” The top search result for those those searchers was a site opposed to TPPA.

Interest in the TPPA in New Zealand, as measured by search volume, spiked at the time of protests in Auckland. A site created by anti-TPPA organisers was the top search result.

Preparing and Training to Lose Control

In our highly connected world, awareness rises when more people are involved in actions. “I was there!” is a more compelling personal story than “did you see this thing they did?”

Losing control is the flip side to opening up an action: people go off script, march down the wrong street, say the wrong thing to a reporter. There are many possibilities—and fears. “The big discussion we’ve had again and again is about losing control,” Rondal told us. “If we invite anyone to our actions [then] we have no control over message, how people react, what they actually do.”

“Fear cannot stop us from being open but instead challenge us to develop strategies that can be both public and effective.”
–Jeff Harrison, Greenpeace New Zealand

Preparation, training and trust are key, said both Rondal and Harrison. As a result, the Greenpeace actions unit is using its experience with detail driven planning to help organise more and better training. The recently released Mass NVDA Guidebook is a key part of the organisation’s efforts to support open actions around the globe.

“It means scaling up things we’ve done for small groups,” Rondal said, “because we need to train hundreds instead of dozens.” But training can snowball across networks over time—the trained become trainers at other actions later, perhaps running their own actions.

An open act of civil disobedience is planned for March 21 in Auckland. March 20 is dedicated to training. Find out more on the event’s Facebook page.

“You are always training,” says Jeff Harrison of NVDA organising efforts in New Zealand. Approximately 300 people had been prepared and trained prior to the February 4 action. He singles out investments in leadership and facilitation training as a priority moving forward.

It turns out that the problems facing organisers in New Zealand aren’t tied to controlling message but responding to uncontrolled growth.

Extensive media coverage and participation in Auckland’s February action has increased interest to new networks and new people are attracted to what the network opposed to TPPA are doing. Training is important, as is how to meaningfully engage more people. “The struggle is with what’s next, the level of inclusivity and the relationship between decision making and openness,” said Harrison about the questions organisers respond to now.

The problems facing the globe are huge. If only a billion acts of courage can save then we must believe in people. “Fear cannot stop us from being open,” said Jeff Harrison, “but instead challenge us to develop strategies that can be both public and effective.”

Please let us know if you’ve been involved in or seen an example of an open nonviolent direct action. Use the comments or send a tweet to @MobilisationLab.

Bring on the people: Opening up non-violent direct action

Can organisations open up non-violent direct action to all comers? Find out what Greenpeace New Zealand learned running an open action in March. 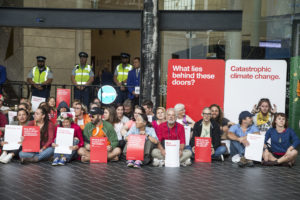 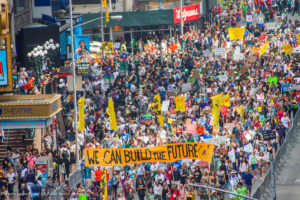