Non-Black organisers of colour can draw on these best practices and lessons about solidarity and justice work in our varied diasporas worldwide. 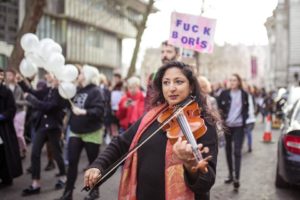 Sparked by a second wave of Black Lives Matter protests, South Asian diasporic communities are surging with support for abolition and Black liberation. But South Asian organisers – particularly those from marginalised communities – are confronting oppressive practices and visibilising hierarchies in South Asian spaces, shaped by  casteism, colourism, and anti-Blackness, and white supremacy.

As a South Asian American organiser currently researching solidarity activism led by queer South Asians in the diaspora, I was curious about how these organisers and and activists are creating new models of solidarity with Black liberation. I spoke with organisers and activists from groups including Equality Labs, a Dalit-led power-building organisation, SAALT (South Asian Americans Advancing and Leading Change), a national coalition and advocacy organisation, CAAAV, an Asian-American base-building organisation in New York, organisers with political education groups; and South Asian members of multiracial organising groups and collectives. Organisers from these groups emphasised a few critical lessons on building power, transformative organising, multiracial coalitions, and solidarity for systems change that resonate across issues and communities. Non-Black organisers of colour can draw on these best practices and lessons about solidarity and justice work in our varied diasporas worldwide.

Look inwards: to be in solidarity, we have to understand our own communities, our histories, and our internal systems of oppression.

All the organisers I spoke with underscored the importance of understanding the nuances in our own communities in order to build meaningful solidarity. For South Asian American organisers, this includes political education that dissects how casteism, classism, colourism, and patriarchy have shaped our communities both back home and in the diaspora. It also means understanding that the traumas and systems we experience in the sub-continent affect our present in the diasporas, and how our communities’ histories of uprisings, violence, revolution, war, and anti-colonial struggle shape the way we operate in movement work in the US.

This means that political education by and for our own communities is crucial. Fahd Ahmed, the executive director of DRUM (Desis Rising Up and Moving), a base-building group that organises with working-class South Asian and Indo-Caribbean communities in Queens, New York, said on a June panel of Asian organising groups working in solidarity with Black Lives Matter, “We have to balance our organising with context of where our communities are at, and an understanding of why they’re there. How can we relate to our own communities or  have solidarity with other communities if we don’t have solidarity with our own?” For DRUM, this takes place through monthly political education trainings on members’ experiences of violence and conflicts in the subcontinent like Partition, the Bangladeshi independence struggle, and the Sri Lankan Civil War, and connections to experiences of violence in the US like surveillance and entrapment post 9/11 or immigration raids and deportations. These political education sessions happen alongside DRUM’s campaign and organising meetings. By understanding South Asian histories of state violence in the subcontinent and then in the US, DRUM creates a foundation for solidarity with Black resistance.

Groups like East Coast Solidarity Summer, Bay Area Solidarity Summer, South Asians for Black Lives, and the South Asian Solidarity Initiative are also strategically focusing  into political education. Haleema Bharoocha, a core member of South Asians for Black Lives, a project of Malikah, told me, “We have had to shed our complexities to fit into the model minority myth, so our work provides healing and unpacking, focusing on South Asian American history first. Then we move to understanding institutional anti-Blackness, interpersonal anti-Blackness, and finally what solidarity, action, and collective liberation looks like.”

Centre the most marginalised; have those with caste and class privilege take a step back.

US immigration laws favour Hindu Indian immigrants with class and caste privilege and white-collar skills, and systems of casteism and classism within the South Asian community itself lead to more visibility, power, and privilege for certain South Asians. This can lead to groups practicing solidarity in ways that lack nuance or erase marginalised South Asian communities, where groups support police reform instead of abolition, overlook long histories of solidarity between Black and Bangladeshi communities, campaign against colourism or skin lightening creams without discussing casteism, or brush Islamophobia and support of Hindutva under the rug while supporting Black Lives Matter.

Key South Asian groups from marginalised and often silenced communities have been pushing back. Working-class organisers and groups with Muslim and Indo-Caribbean membership like DRUM and Jahajee Sisters highlight the links between policing, surveillance, and deportations of Black, Muslim, and Indo-Caribbean communities that were ramped up after 9/11. Equality Labs has run panels between Sheedi (Black Pakistani) lawmakers, Dalit activist leaders, and Black liberation scholars, and has been lifting up the longstanding partnership between Dalit and Black organisers.

Sharmin Hossain, the political director at Equality Labs, emphasised centering caste in conversations about solidarity between South Asian and Black communities, noting, “South Asian regional histories of anti-indigeneity, caste apartheid, gender and religious oppression, and ableism are fundamentally anti-Black and connected to racial apartheid. Dalit leaders have always had deep relationships with Black liberation struggles, from the Dalit Panthers, to B.R. Ambedkar and W.E.B. DuBois’s historic exchange, to Cornel West’s teaching of Ambedkar’s writings and collaborations between Black and Dalit feminists. So at Equality Labs, we focus on building power through authentic relations with Black leadership that are rooted in transformative solidarity and meeting the needs of the moment, whether defunding the police, dismantling the prison industrial complex, or something else, because our liberation is collective.”

Privilege can also cause South Asian Americans to take over or overshadow Black-led organising. Instead, solidarity means that South Asian organisers de-center themselves. As a South Asian organiser supporting Black Brunch disruptions recounted, “I was so eager, and felt I had logistics, Twitter, space, everything on lock. But a Black organiser, who was a friend, told me thank you, we love that you’re helping and offering your resources, but you have to de-center your voice. That showed me that my ego had to step back, and I had to practice solidarity as goodwill, where I was following the leadership of Black organisers creating the tactics and story. Black Brunch showed me I had to understand what was needed in the room.”

Haleema echoed that solidarity meant knowing “what you’re willing to sacrifice.” She emphasised that “being an accomplice rather than an ally means…changing systems as part of a lifelong struggle.”

A recurring theme in these conversations about solidarity work systems change. In order to truly be in solidarity with abolitionist strategies like #DefundthePolice, South Asian American activists have to be dedicated to a transformation of the system in which we live. Many of the organisers I spoke with referred to the concept of transformative solidarity, a theory that recognises that solidarity has levels of practice.

DRUM explains transformative solidarity in action when they describe their campaign against the sometimes conflicting goals of anti-bullying in schools and getting police out of schools. With their working-class South Asian membership, organisers led conversations about what policies to combat bullying could look like, and how to achieve those in an anti-carceral framework that didn’t increase police presence and harm Black students.

Sasha W, the ED of CAAAV, an Asian-American base-building group in New York, similarly spoke of their Bangladeshi- and Chinese-American membership’s work with transformative solidarity, saying, “We build analysis and relationships to get to a place where our members won’t take something beneficial for us if it’s harmful for other people. CAAAV members speaking out against Peter Liang’s murder of Akai Gurley was an example: members publicly spoke out that Peter Liang be held accountable at huge cost to them. That’s a consistent practice that we try to work on and keep building.”

Other South Asian American organisers are practicing this transformative solidarity in multiracial formations by identifying and combating common systems and structures of oppression.A housing justice organiser with the Right to the City Alliance in California and nationwide who wishes to remain anonymous, explained, “I have a relationship to any community fighting for justice, but my work is also so deeply connected to empire and colonialism, so it doesn’t matter whether I’m in India fighting for something specific to my identity, or if I’m here doing Black solidarity work organising with renters or organising for land justice with Black folks and Native folks; these structures are collectively oppressing my people too.”

Many of the activists invoked the way queerness has opened up space for their solidarity practices. Organisers described naturally practicing solidarity by looking for political home and community outside of South Asian spaces, because queerness necessitated this search. Har, a youth organiser in New York, told me, “There is more of a camaraderie and intimacy to organising that is brought by queerness, and more of an emphasis of that dreaming and visioning thing.”  She compared this to mainstream organising, adding, “Patriarchal organising treats the work like it is war. Queerness shows how organising is also a project of conceiving, creating, of birthing a new and transformative world, and queer people always have had to do that.”

Kirin, an organiser with the Wildfire Project, a radical training collective, agreed, and noted that finding the roots of queerness in her own South Asian history allowed her to be in deeper solidarity with all forms of liberation. As we spoke about the impact that COVID-19 and BLM are having today, she said, “In the midst of a pandemic and the rise of global fascism, where everything feels new and overwhelming, I have to remember that I am here because my ancestors had the audacity to exist, and to resist. Remembering that feels really critical to being a queer South Asian because, we were queer before we were colonised, and that helps me remember our way forward.”

While the themes that South Asian American organisers covered on solidarity practice were diverse, they emphasise that solidarity comes from an understanding of our specific histories and liberations being tied together. From community-centred political education work, to de-centering our egos, to building authentic and non-transactional relationships with Black organisers, to systems change and queer modes of creation, solidarity practices are ultimately about our shared dreams for the future. For a world free of police violence and carceral systems, where all Black people are free, South Asian American organisers are showing that through sharp analysis and authentic relationships, we can take specific steps in the project of Black liberation to, in Assata’s words, love and support one another to get free together.

Don’t Go It Alone: Check out this new Organising Manual from Blueprints for Change 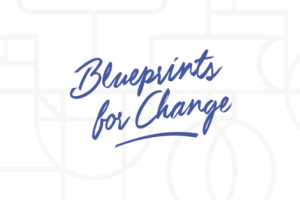 How to teach grassroots organising and leadership on WhatsApp

South African-based Grassroot is testing new ways to train and connect community organisers online. And, yes, this approach is approved for social distancing and Covid lockdowns. 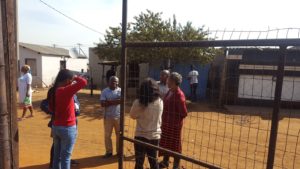