Over the course of five years, the Mobilisation Lab facilitated a massive culture shift across Greenpeace towards more modern campaigning.

The Mobilisation Lab was born inside Greenpeace International in 2011 amidst a period of radical transformation for the organisation and the wider environmental movement.

Since the first Greenpeace ship sailed into Alaskan waters in 1971 to protest a U.S. nuclear test, it demonstrated how local organizing and mass media can combine to change the public debate. Video footage and press coverage have been integral to Greenpeace’s campaigns since its first victories at sea.

But times change. Since the 1990s, the widespread adoption of email, mobile phones and social media has allowed for a new kind of campaigning—one that enables a passive audience of individuals to become participants in collective action at historic speed and on their own terms.

As the internet evolved—from a new medium, to 2.0, to the Facebook era—Greenpeace struggled to keep up. And it was hardly alone. Legacy non-profits have lagged in the digital revolution, largely because institutions learn everything slowly, from diversity practices to measurement and evaluation.

The crisis that led to the creation of the MobLab began in 2009, when the Copenhagen Climate Change Conference failed to yield a binding treaty despite a massive advocacy campaign led by the world’s major environmental organisations. It was a brutal setback. International Executive Director Kumi Naidoo called it a “burning platform” moment—a time to embrace a new model for impact or risk becoming irrelevant.

Greenpeace leaders humbly and boldly acknowledged that the strategies and tactics that had brought the organisation decades of victories were insufficient to achieve progress at the scale of challenges like climate change and inequality.

So they adopted a set of visionary principles that acknowledged people as essential, powerful campaign partners—not just constituents or supporters. But to make this vision a reality, Greenpeace would need to rethink how it worked, from designing campaigns that enable the full potential of what people can do to embracing digital platforms in new ways to engage and inspire millions to act.

To help the organisation develop and implement this new playbook, Greenpeace hired digital campaigns veteran Michael Silberman to build a “Digital Mobilisation Centre of Excellence” in 2011. Designed as a source of best practices, testing and strategy development for a global network of over 25 regional offices and 3,000 staff, the program that became the MobLab had a dual focus on increasing digital capacity and promoting community-based, people-powered campaigning.

Over five years of coaching, experimenting and building a global community of practice, MobLab facilitated a massive culture shift at Greenpeace. New campaign planning methods have been widely adopted to help teams plan more creative, participatory campaigns that are timely and responsive. In order to receive funding, campaigns and offices must outline clear plans for how they’ll engage people in meaningful action as partners in advocacy. And now a majority of Greenpeace offices have new digital mobilisation and supporter engagement positions at the senior level (e.g. chief engagement officer and director of participation)—which were few and far between when we first started in 2011.

In early 2017, MobLab began the process of becoming fully independent and expanding its mission to serve the wider changemaking community. We’re currently incubating this next chapter through a partnership with the CIVICUS World Alliance for Citizen Participation.

For more about MobLab’s work with Greenpeace:

Read this third-party case study on what MobLab achieved after five years at Greenpeace. 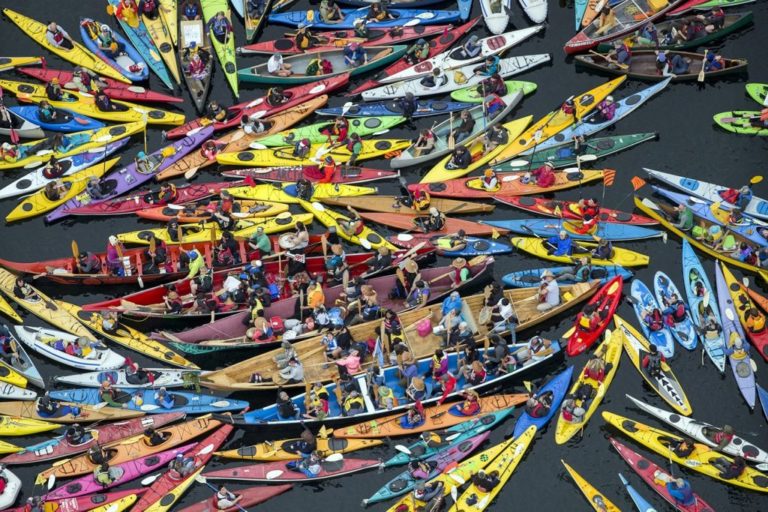 A group born at Greenpeace spreads ideas about grass-roots advocacy

Check out this profile of our work with Greenpeace and beyond in The Chronicle of Philanthropy.