Brandjam campaigns literally use a companies brand value as a way to access public attention (and negatively impact a brand). So…what’s to be learned here? 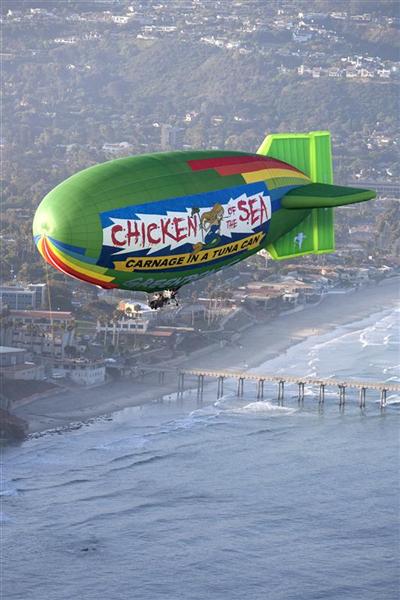 Campaign victories come in all shapes and sizes. When facing a well-funded, multi-national corporation as an adversary, the challenge set in front of any campaigner can feel daunting. These brands have reputations to uphold and customers to keep, so any change campaign can often be met with forceful pushback…or even a wall of silence. So utilizing the right digital strategies to get the attention of the brand can help elevate an issue above the wall and move the campaign down the path toward successful outcomes.

MobLab chatted with two strategists, Meena Hussain of Greenpeace USA& Karin Roland of UltraViolet, to gain insight into lessons learned through five real-world #BrandJam campaigns. Meena Hussain was most recently social media strategist at Greenpeace USA, with responsibilities including management of strategy for all social platforms, including Facebook, Twitter, Instagram, and Pinterest, as well as working with Greenpeace’s team of online campaigners to manage daily output and develop long-term strategies. Karin Roland is the campaign director for UltraViolet, where she oversees initiatives on a range of issues, including health care, economic security, violence, and reproductive rights.

Based on our conversations with Meena and Karin, here are 5 insightful lessons from recent campaigns they’ve helped to run:

LESSON #1: GO AFTER AN AFFILIATED INFLUENTIAL AUDIENCE, EVEN IF NOT THE DIRECT TARGET

MobLab: What was the main goal of your Reebok campaign?
Karin: UltraViolet’s goal was to convince Reebok to fire Rick Ross as a spokesperson. We live in a culture that has deep problem with how we handle prevention and attitude toward race and sexual assault. And in many ways, pop culture encourages it. Rick Ross has a huge following, and he has one song with lyrics about drugging and raping a woman “who doesn’t even know.” He had a major endorsement deal with Reebok to sell shoes, clearly targeted toward young men. And on other hand, Reebok is trying to sell to women, as well.

MobLab: You used social media and purchased ads?
Karin: Social media was one theme of a campaign, as we used it to drive earned media in entertainment press, which became the key to victory. We initially launched a petition to fire Rick Ross, which took off through our own members outreach, social media channels, etc, and it generated press coverage. We bought targeted online ads via search, social, and banner ads. We launched thousands of calls to Reebok HQ, basically flooding their phone system. Supporters also rallied for a big protest in front of NYC flagship store. That was great, but Reebok wouldn’t respond.

MobLab: How did you break through?
Karin: We knew that hip-hop communities are very active on Twitter. This campaign started to make a splash there. So, we asked our members to address Reebok on social media, and we found on-going conversations between influencers and jumped into those conversations. Rick Ross eventually responded to our petition on Twitter:

Once that happened, music/entertainment media got involved, including TMZ. That negative attention got through to Reebok. This was their target audience. Almost immediately, Reebok responded to the and terminated the endorsement contract.

LESSON #2: SOMETIMES JUST GETTING ATTENTION IS A WIN

MobLab: Have your goals ever changed during a campaign?
Karin: We’ve been working on paid family leave for a while, but we’ve made very few inroads to actual progress. A local Chicago Whole Foods store, in the midst of winter when schools were closed, fired an employee for not showing up for work while staying home with her special needs child. Before we took up the cause, her co-workers rallied behind her, and she had already spoken to the press. We wanted to help get her job back, initially, and we wanted to change Whole Foods’ policies. And clearly, we wanted to elevate issue of paid sick leave. We had micro and macro goals. We launched a national online petition, which currently has 67k signatures. We partnered with local groups and invited press to events. We logged over 5k calls out to WF offices. We hired a billboard truck to circle the Austin HQ. 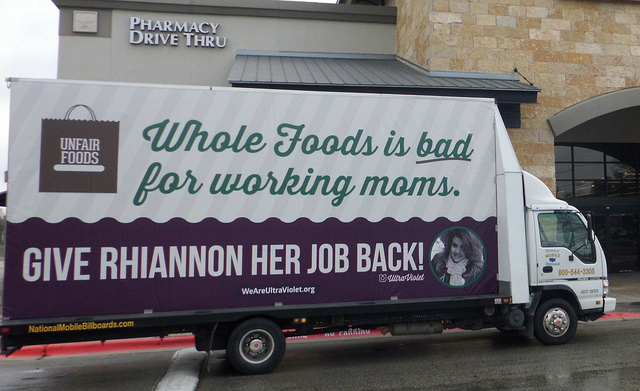 Karin: The response from Whole Foods was that they declined to speak about a specific HR issue. They delayed by sending the fired employee through a very long appeal process. In the end, corporate didn’t change its policy, but our actions garnered huge amount of earned media and national attention. Now, the City of Chicago is considering paid sick days within city limits. The President is taking about it. So, even though, the micro goal wasn’t successful, we brought tons of visibility to the problem.

MobLab: How do you use advertising with specific targeting?
Karin: Sexual assault on college campus has been one of our main issues. Dartmouth had been one of the worst offenders on brushing aside the “rape problem.” We launched an edgy banner ad & social media campaign, which received national attention, including a spot on Good Morning America. Additionally, we focused many ads into zip-code targeting near the campus to make sure administrators and anyone visiting campus saw them during college decision season. “Accepted to Dartmouth? You should know about the rape problem.” 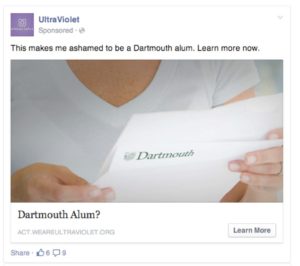 Karin: On Facebook, Twitter, and via banner ads, it doesn’t take a ton of money if you are creative with targeting.

MobLab: How has Greenpeace used social media in a #BrandJam?
Meena: One great example is our campaign against KFC’s connection to deforestation and its packaging. Greenpeace had shown that wood fiber from Indonesian rainforest trees was ending up in those famous chicken buckets. KFC’s hashtag is #sogood, so we pushed out #sogood #nogood on Twitter. We created sample tweets with both hashtags, so their supporters and their social media team would see it. We also created a dedicated website with a social game, where you could pick which KFC meal or character you wanted to be. We asked people their favorite sauce, then we live-streamed dipping the Colonel in a vat of that sauce. We got thousands of people around the world voting. Eventually, Yum Brands (parent company of KFC) changed course and made a commitment to make its packaging more rainforest-friendly.

LESSON #5: KEEP THE PRESSURE UP

MobLab: Not every campaign is quick. Is there a digital campaign example with a long-term strategy?
Meena: Definitely. Chicken of the Sea comes to mind. We sent a survey to grocery stores to figure out which of them sell sustainable seafood, especially canned tuna. There has been evidence that the main supplier of Chicken of the Sea tuna is a main contributor to destructive fishing. Initially, we encouraged volunteers to change their FB profile pic to the brand-jam logo, and then we asked them all to post to the company’s Facebook wall all at once. That gets noticed. Then we pushed out broadly on FB/Twitter, getting people to comment on their posts. Chicken of the Sea responded by blocking people from the page, putting out their PR statements on social media, etc.

MobLab: So the company initially pushed back?
Meena: Yes, but our supporters would simply comment on the company’s posts. This went on for months and months. We just kept getting people to do it, posting a couple times a day for 3-4 months. We started a global petition, then delivered it at their HQ. Canvass offices had rallies in every city, and we flew an airship at their HQ. Now, Whole Foods, Trader Joe’s, and others don’t sell Chicken of the Sea brand canned tuna. But this an on-going campaign, since the over-fishing is still occurring. 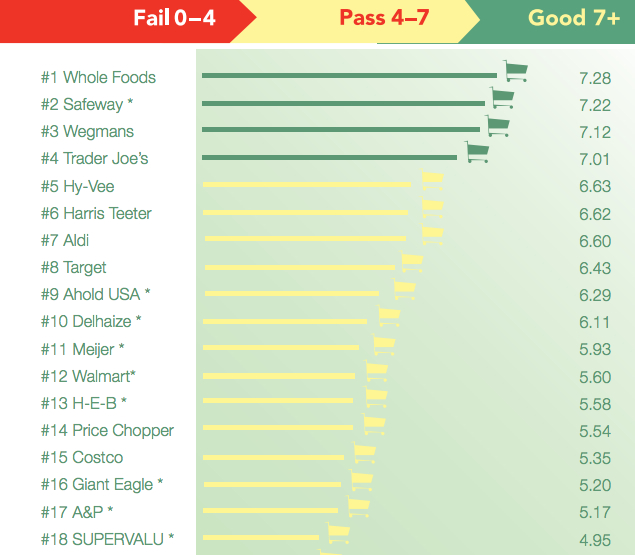